[easyazon_image asin=”1595827374″ alt=”Falling Skies” src=”http://ecx.images-amazon.com/images/I/510xWFXzqiL.jpg” align=”right” width=”275″ height=”416″]Falling Skies is an all new, original series on TNT, produced by Steven Spielberg. The show stars Noah Wyle (ER TV Series), Moon Bloodgood (Terminator Salvation), Drew Roy (Secretariat), Colin Cunningham (The Sixth Day (2000)), Steven Weber (Leaving Las Vegas), and Will Patton (Armageddon (1998)). In this episode, Mason finally rescues his son from the loving arms of a Skitter. However, we also will learn what the term “sometimes you win some, and lose some” means.

Father and Son relationships seemed to be the theme of this week’s episode of Falling Skies. Since the beginning of the season, Mason and his son Hal were always at a disagreement regarding Hal’s willingness to venture out on dangerous scouting escapades. Hal’s involvement the rescuing of his middle brother, Ben, proved most fortuitous for the Mason family clan. However, let us first address the death of our beloved physician by the caged skitter.

I did see this coming. How long can a prisoner be caged and not act out? Dr. Webber just got too comfortable and paid for it with his life. Now this places Anne in the position to be the only one tasked to remove the alien harnesses from the captured kids.  In this episode, we learn a bit more about Anne, proving, finally, the vulnerabilities of the skitters—going in for the Taser kill! We also learn that Weaver and Anne lost a loved one due to the alien invasion.

Now, rescuing Mason’s son Ben was the highlight of the episode. Not only did Hal prove to be a clever harnessed impostor—-it was neat to see a skitter in a more caring role, nesting over its tightly pack pile of harnessed kids, cooing and cradling their heads like a lovelorn parent over her brood. That was until Ben woke up while Hal was working on positioning himself to execute the skitter, alerting it, causing a struggle to ensue. It was a good thing that Mason and his team was close by to lend a hand. 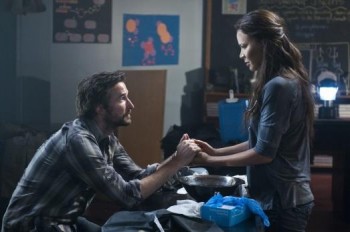 Anne successfully removed the harnesses from the captured group of kids, and was the only one left to clean up the mess. I found it touching to see that Mason finally was able to revel in actually being with his son again, and it was good to see him together with his three sons. Ben, surprisingly, recognized his father. Which was the complete opposite of what happened in the previous episode, where Rick did not recognize his father after his harness removal. If you remember, Rick was still being somehow controlled by the caged skitter, even willing to reapply his harness. What does this also means for Ben and the other kids that were rescued?

With Ben safely rescued, along with the other kids, I am left wondering what will keep Mason with the resistance. It may very well have something to do with him getting a little ‘touchy’ with Anne. She is the resistance’s only medical personnel, and is obligated to the cause in some way, well for that single most important reason. Honestly, where else could they go?

Maybe after this episode, Falling Skies will become more believable. We will see.