This guide contains several spoilers of Toby Fox’s Undertale. Most of these details were scattered across the net so I attempted to consolidate them as much as I could. Good luck and stay determined fellow adventurers!

Undertale is just shy of being a month old and stirred up those of us who have played it into a frenzy.  It’s that same frenzy that has probably driven you here, right?  Before I go into detail about what is required to obtain the “True Ending,” here are a few things I will clarify upfront.  Highlight the text of any censored portion with your mouse. 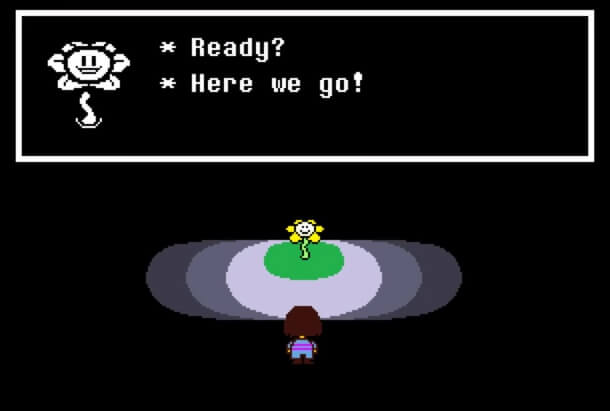 What You Need to Know First

NOTE: At this point forward, nothing else will be censored.

The key to getting the best possible pacifist ending is to make sure you befriend crucial plot characters. These characters include Toriel, Sans, Papyrus, Undyne, and Alphys. Some of these opportunities are initiated through phone calls. Most of these phone calls are triggered in certain areas. What appears to be consistent in several playthroughs is that Alphys will probably be the last monster that you need to befriend after completing the first playthrough requirement. I have yet to see a fresh playthrough in which the player gained proper access to the depths of Alphys’ lab. Alright, enough stalling, here’s what you need to do!

How to Become Friends with Toriel

Summary: Spare her!
Toriel is quite a compassionate soul already. It’s heartbreaking if you abuse that compassion. Just live up to her expectations of you and do NOT under any circumstances fight her. Honestly, the game gives you no justification to even hit the FIGHT button. Just stay determined and reach for the SPARE button nonstop.

How to Become Friends with Sans

Summary: Don’t turn him down for lunch invites!
Sans is a jolly skeleton who carries the burden of knowing many tragic truths. He’s eager to play it cool and see you smile. If he invites you to a meal, have a heart and don’t turn him down. Do you seriously think you have something better to do? NOPE. Those of you who like to get into the RP nature of the narrative can go a step further and answer questions about Papyrus in a positive light. That part is not required but it shows you appreciate the brotherly bond they share.

How to Become Friends with Papyrus

Summary: Go on a romantic/platonic date with the dude and be sure to get his number!
Papyrus boasts and brags a lot but don’t let that turn you off. In fact, an evening with him might leave you laughing harder than one of Sans’ boneheaded puns. When befriending Papyrus, it is essential to check in on him. This is especially important after the first fight. It wouldn’t hurt to even suggest dating during your battle with him either. Once the encounter is over, you will most likely have the opportunity to experience a romantic get together with him. However, if you weren’t flirty during the encounter, the date will be platonic according to some playthroughs. Regardless of what it turns out to be, foster your friendship with Papyrus and be sure to get his number after hanging out.

How to Become Friends with Undyne

Summary: Give her water when she collapses from thirst, visit her after you fight, and accept her intense cooking lesson!
Undyne is truly terrifying at first glance. Her monstrous suit of armor, the menacing shine of her eyes, and her thundering footsteps definitely seem ominous. It turns out though, she is not ruthless in nature and is merely trying to protect the kingdom she loves. Respect this brave warrior and be sure to rehydrate her when she falls in battle. If you aren’t careful and leave the screen after she collapses on the ground due to thirst, you pretty much screwed up your True Ending Pacifist playthrough. If you give her a cup of water she’ll slowly walk off screen and end the battle.

After the fight continue heading east. Once you spot the save point at the fourway intersection, head down south to the River Person’s boat and ask to taken to the Waterfall area. Upon deparing to the shore, head north and then west. Pass the signpost and the save point in the middle of the screen and head down the tunnel to the upper left. Following these directions will lead you to Undyne’s house. She will reluctantly invite you in and spend some quality time with you after Papyrus’ comical exit.

Don’t be alarmed when Undyne begins her MMA inspired cooking lesson. The ride will be wild but you are allowed to prepare the meal as fiercely or as wimpy you want. The end result is…on second thought I won’t spoil the fun. Completing this encounter will make you friends with Undyne in no time!

How to Become Friends with Alphys

Summary: Deliver Undyne’s letter, go on a date with Alphys, and discover the secrets hidden away in her lab!
Getting close to this scientist and anime enthusiast is vital if you desire to get the coveted True Pacifist Ending. Alphys will hunker down in her lab most of the time and become an even bigger recluse. Eventually, Undyne will give you a call while you are walking around the Hotland, MTT Hotel, or heading toward King Asgore and ask you to deliver a letter to Alphys. Don’t worry if you don’t get a call right away. Just be sure you receive it before you confront Asgore. If you don’t, head back to Snowdin via the River Person ride and chat with Undyne in front of Papyrus’ house. Undyne may also hand the letter straight to you depending on certain choices you made.

Once you get the letter addressed to Alphys, deliver it to her lab and wait for her adorable response. Alphys will then — SURPRISE, SURPRISE — go on a date with you. What is it with this game and hooking you up with these goofball monsters? Anyways, proceed however you like during the date and wait for the discussion between her and Undyne. Undyne, with the help of Papyrus, will give Alphys a peptalk and deliver a much needed self-confidence boost. Once they have finished their chat, make your way to Alphys’ lab and keep an eye out for Papyrus’ phone call. He’ll encourage you to check in on her, so listen to him, and get inside the lab pronto.

Inside the lab, you’ll tumble down into a labyrinth of secrets. Pay attention to the notes Alphys leaves on the floor which point to where door keys may be. One of the less obvious key locations would be the one hidden under the sheets of the bed that has the covers pulled up over the bed pillow. The second less obvious key would be in the room that has three faucets.  You simply have to turn each faucet on to obtain that one. After you discover the full truth about the type of experimentation Alphys participated in, an elevator door will open in front of you.  The elevator will jettison you to the final corridors that lead you to King Asgore.

If you’ve made it to this point, congratulations, you are on your way true ending! If you remained determined and spared the souls of innocent monsters to make it here, I salute you. If you gave being a homicidal maniac a try because you have soul as black as coal — well — the game will scare you more than any of my words could.