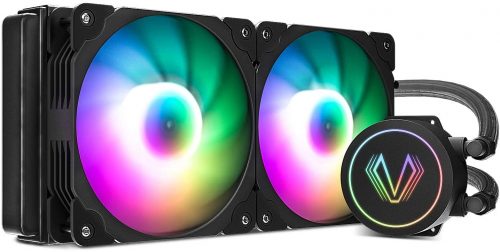 With the Vetroo V240 you get a AIO CPU Water Cooler that has dual 120mm PWM fans which allow you to adjust for the lowest volume (fan speed) and airflow performance.  There is a larger 240mm radiator to remove excess heat and improve cooling.  The spraying type copper bottom increases surface contact with the top of the CPU and speeds up the liquid circulation as well.  This AIO Liquid CPU cooler supports ARGB lights controllable via a compatible 5V ARGB motherboard, just make sure your motherboard supports 5V ARGB if you want to control the lights.

What comes in the Vetroo V240 Box 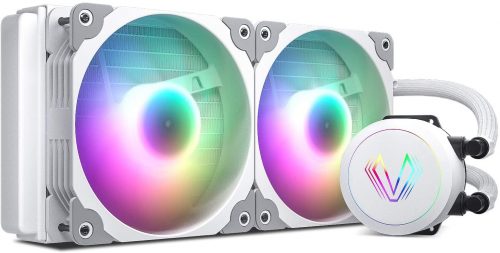 You can buy the Vetroo V240 in either Black or White Colors, and remember you can set the ARGB fan colors to whatever you want with the compatible 5V ARGB motherboard.  This budget AIO CPU Water Cooler is just under $80 on Amazon at the time of this article for either color option.

Need something a little beefier for your i9 9k or 10k builds, then you want the larger Ventroo V360 compared to the Ventroo V240.  With the Vetroo V360 you get the 3 120mm ARGB PWM fans which allow you to adjust for the lowest volume (fan speed) and airflow performance.  The PWM fans can be adjusted to run at speeds between 800 – 2800RPM. You get a 360mm radiator to remove excess heat and have more cooling than the 240mm radiator of the V240 model.  Just like the V240 model it has the spraying type copper bottom for increased surface contact with the top of the CPU and also serves to speed up the liquid circulation.  The Vetroo V360 AIO CPU water cooler also supports ARGB lights controllable via a compatible 5V ARGB motherboard, again double check your motherboard to make sure it supports +5V ARGB if you want to control or sync the lights.

Included in the Vetroo V360 Box

At only $20 more than the V240 I would highly recommend to go with the larger V360 unless you are using budget CPU’s like the i-3 or i-5 and/or have limited PC case room for the 360mm radiator and 3 fans.  This model also comes in black or white at the same price and I personally think the white looks amazing.

Influencer / Reviewers / Live Streamers - Get in Touch https://t.co/DwhaTltp6U
Protect your eyes with the Baseus Monitor Light Bar https://t.co/0QQHZ2EefP - 21 hours ago