While I never thought The Walking Dead was for a young crowd, this season is proving beyond a doubt it’s not.  Heck I would go so far as to say, it’s not for the faint of heart either since the blood, gore, and death is currently taking center stage.  Of course, how could it be less bloody when the circumstances are even direr now than when the show began?  Humanity is dwindling quickly. 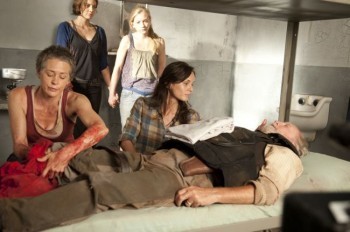 Hershel’s life is hanging in the balance.  While cutting off the bottom of his leg might have saved him from turning into a walker, at least temporarily, without proper care and supplies he could still die.  When he did stop breathing and Lori gave him mouth to mouth, I jumped when he did.  I expected it but still was a little scary because I wasn’t sure if he would be alive or dead come back to life.  Even though he woke toward the end and his hand shake to Rick shows he’s grateful for being save, I don’t think he’s out of the woods by a long shot.

This episode shows again just how changed the group is.  Lori asking Rick what he thinks needs to happen with the prisoners they rescued and when he answers they need to die, her telling him to do it with a clear conscious.  Despite the fact that there are not many people left in the world, their safety is first and foremost.  I’m sure the fact that these are criminals, with some highly unstable, made Rick come to this decision. 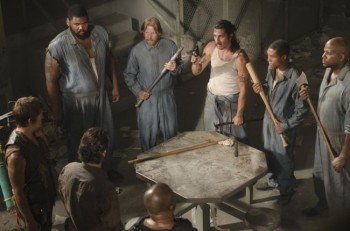 It was somewhat amusing to watch the prisoners attack walkers the first time, you could tell they ignored all the advice Rick and Co gave them and fell into their prison riot tactics.  At least none of them died from their stupidity, at least at that point.  The leader of the prisoners was obviously attempting to take Rick out when they open the laundry room doors as they clear out a section for those five.  First opening both doors so the walkers could easily attack and the throwing one on Rick, that was his kiss of death.  Of course, it didn’t help he not just killed Tiny after the big man got scared, left the group, and got bit, but bashed his brains in so much there was more on him than Tiny.  Rick chasing the small prisoner who tried to attack him after he did kill the Latino leader could have been a mistake; there could have been walkers anywhere in those dark corridors they ran down.  The two who actually survived this cleansing may not be as much trouble but who really knows with the one.

What is the most disturbing is the end of the episode.  From the previews at the end of episode one, we know there will be a serious threat to the group from a yet unknown group.  I’m sure that was who watched Carol as she began her “medical” training.   The preview for next week’s episode makes it also look like Andrea will be reunited with the main group when this new threat catches her and Michonne, but The Walking Dead is good at throwing curves at the viewers so who really knows.