The Walking Dead is certainly making a few things “Clear” for some of its characters and the viewers this week.  Instead of bouncing between Woodbury and the prison, we follow Rick, Carl, and Michonne as they travel back to the Grimes’ hometown in King County.  Rick knows they will find weapons there since it was deserted when Rick awoke in the hospital so long ago.

As they travel the empty road, the small group passes a backpacker who runs after the car begging them to stop.  I kept expecting them too but Rick just kept driving, which just goes to show how changed the entire group is after dealing with The Governor.  The road is clear except for one spot where a crash happened and several people died or turned.  As Michonne slows the car down to look at a trapped walker, a wheel gets stuck.  Before they can jump out to push it free, a group of walkers surrounds the car.  Rick tells them all to cover their ears, rolls the window down enough to put the gun out, and shoots a walker; I was impressed that he covered his own ear by the window as well.  Next thing we see is the three of them going through the belongings and taking a few items.  Then just as they head out again, the backpacker rounds the corner and begins to run, begging them again to stop for him. 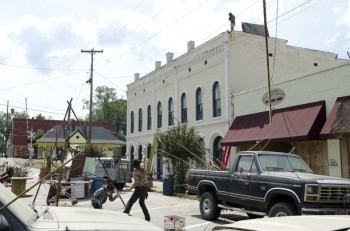 Upon entering King County, the trio notice several walker boobie traps.  They are all ingenious in style and usefulness but the question of who set them comes into play, at least for a short time.  As they begin to explore a masked man attacks them.  Carl shoots the man but doesn’t do much more than knock him out and give him a big bruise due to the SWAT style gear he has on.  When they take off the mask, it turns out to be Morgan, the man who originally saved Rick when he had no idea what was going on in the world.  Michonne and Rick carry the unconscious man back to his place and wait for him to wake up despite Michonne trying to convince Rick he is not their concern.  Rick, of course, will have none of that since Morgan did save his life.

While they wait, they examine his place, Michonne eats his food (“the mat said welcome” she tells Rick when he complains), and try to figure out just what might have happened to Morgan’s son.  The trio also raids his very well stocked gun supply before Carl tells his father he wants to get some things for Judith, especially a crib.  Rick allows Carl to go but only with Michonne tagging along, he tells her he will be fine with Morgan since he knows the man. 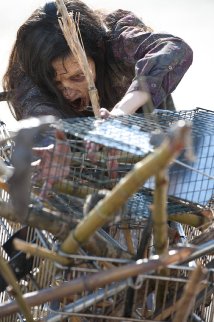 Despite Carl’s remarks, he goes past the baby store and attempts to ditch Michonne when a walker stumbles near them.  She doesn’t let him get far, stating that he wanted to go to the baby store.  He tells her he does but has another place to go first and she doesn’t need to go with him, he can do it on his own.  Her response is that he can’t stop her from helping him.  Turns out Carl wants a picture from a café; somehow this place has a picture of Rick, Lori, and Carl (did I miss the explanation of that?).  Michonne helps Carl recover the picture using the rat bait trap Morgan has set up with one of his boobie traps but the pair run into a bit of trouble when the rat escapes and the walkers stumble onto the pair.  While they get out, Carl loses the picture in the escape.  Michonne won’t let him go back for it but somehow she manages to get it, and a cat decoration, without the walkers getting her.  Of all the things this show has done which seem far-fetched, this was the biggest since the walkers were all over that picture and it only took Michonne a few moments to get in and out with it. 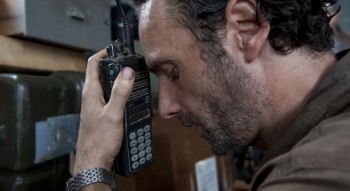 In the meantime, Morgan wakes up and stabs Rick as he claims the dead have come back with familiar faces.  Rick manages to tie him and talk to Morgan for a while.  At first Morgan’s memory doesn’t work right but eventually he remembers Rick when the walkie talkie comes up.  Morgan blames Rick for not answering the walkie ever and even tells Rick that he turned it on every day just like Rick told him too.  Your heart breaks at this but since we’ve seen this, we know Rick did for a while and then lost it during their flight from the woods.  Unfortunately, the heartbreak gets worse when Morgan reveals that his son was killed by his own walker wife that he was unable to kill despite Rick leaving him a gun and urging him to do so.  The death seems to have been the edge, which Morgan fell over and hasn’t really returned from.

Even though Rick offers Morgan the chance to come back with them to the prison, Morgan declines coming back at Rick that the place can’t be that safe if they are in King County searching for weapons.  Morgan also says he can’t witness any more death, going so far as to tell Rick that one day his boy will die too.

When Michonne and Carl return, Rick and Michonne talk about Morgan.  Seeing his once savior again, now gone mad, appears to be a wakeup call for the group leader.  It also helps that Michonne tells Rick she used to talk to her dead boyfriend (I guess she doesn’t anymore).  The two seem to connect on this and Carl’s comment that Michonne “may be one of us” just might have made an impact on Rick and Michonne’s chance to stay with the group.

After loading everything in the car they came for, the trio drives off, with Michonne at the wheel again.  As they find the car accident site again, the backpacker is mysteriously gone.  In its place, is a bloody line where walkers dragged his body as they tore it to pieces.  He apparently dropped the backpack to run because it’s not bloody and Michonne stops the car so that Carl can pick it up.  Obviously, you don’t want to waste anything that can be useful these days.