I have to question the group in this week’s episode of The Walking Dead because they didn’t seem to be thinking clearly.  If you didn’t see the episode, When the Dead come Knocking, you missed some pretty significant lead-ups to the mid-season finale next week.  Plus a surprise return for the group. 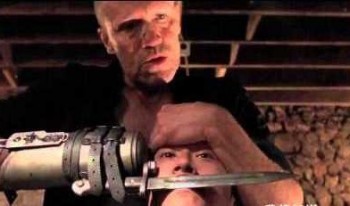 As the show opens we learn that Merle is still a heartless bastard who thinks he’s better than everyone else.  Nothing has changed since he lost his hand to keep his life.  In fact, I would venture to say that seeing Glenn alive and well has made him highly upset all over again about what happened to him in Atlanta.  While torturing Glenn, Merle learns that they did try to go back, even T-Dog, but that means little to him now.  Merle is also not sorry to find out that T-Dog is dead (see heartless bastard).  Glenn refuses to give up the rest of the group no matter what Merle does, and Merle seems to be a bit impressed by this since he thought Glenn was weak before.

So when his intimidation doesn’t work on Glenn, the Governor interrogates Maggie himself.  He is nicer about it than Merle was with Glenn but still frightening because he makes her strip her upper clothes off and pushes her on the table like he plans to rape her.  However, her comment of just do what you have to do makes him stop.  Whether he really wasn’t going to or he was but realized she wasn’t going to budge from the threat is something we will never know.  Unfortunately, when the bring Maggie into Glenn’s cell (after he manages to kill a walker while tied up) she caves as soon as they threaten Glenn in front of her.

The Governor is unhappy to learn that the prison has been recovered by that group, for several reasons.  The biggest, which is unspoken but seems obvious, he wanted that for his group.  Merle insists there is no way that a group of ten could have cleared it out.  Of course, what they don’t know is that parts of the prison are still filled with walkers and there were more when they started clearing it.  Either way, the Governor doesn’t like this knowledge because he feels that the group just might come looking for their friends.

Michonne’s respite from an attack does not last long while her and Rick stare each other down.  Just as he notices blood coming from her side, the walker next to her realizes she isn’t one of them.  Not good for Michonne as Rick isn’t willing to help her until Carl opens the gate and shoots a walker.  While Michonne takes the head off the walker about to attack her, she falls down from the blood loss.  Rick takes out several other walkers, discovers she has been shot not bit, and carries her into the prison yard while Carl picks up the baby food. 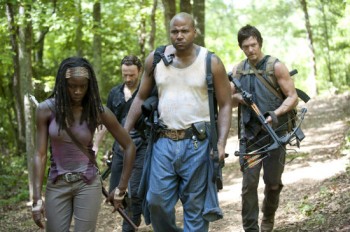 At first things are extremely tense with both sides as Michonne refuses to give her name and Rick won’t let her into their cell block home, but eventually things work out and the group discovers that Maggie and Glenn have been taken.  In the midst of this trouble, Carol is reunited with the group.  She is happy to see them all and glad to see the new baby, but highly upset that Lori didn’t make it.  We also finally get a real name for Rick’s daughter, Judith.  Carl comes up with it remembering his favorite teacher before the nightmare they now live in began.  Rick thinks it’s perfect.  Rick also thanks Daryl for taking care of the baby when he wasn’t able to and Daryl blows it off as something anyone would do in their group because they are like a family.

What struck me as odd here is that Michonne doesn’t say anything about Andrea.  It could be she doesn’t realize this is the group Andrea was separated from at the end of last season.  I did think it odd that she didn’t at least mention a friend of hers was lured to stay at Woodbury when she speaks about it.  Perhaps the thought of getting back at the Governor makes those thoughts insignificant for Michonne.

When Rick, Michonne, Daryl, and Oscar head out to rescue Glenn and Maggie, they listen to Michonne and stop at a certain point to sneak up on Woodbury.  Unfortunately, they run into a ton of walkers (how come Rick didn’t ask Michonne about how she got past that many unharmed in her condition?) and run to a house they find.  Inside is a person, hiding, who tries to make them get out as he continues to raise his voice, which attracts even more walkers to the front door.  Eventually the guy is killed and when they discover that there are no walkers out back, they throw his body to them and run for Woodbury.  Just as the show ends, Rick and the rescuers reach Woodbury at night.  They can see how the town is fortified and are trying to figure out how to get in.

Andrea, blissfully happy in her newfound relationship, is asked to help Milton with an experiment he is doing on a dying man of their group.  Milton has been asking questions and recording the results about Mr. Coleman’s life.  The elderly man is dying of prostate cancer and has agreed to let Milton use his dead body to see if the walkers retain any knowledge of their living lives.  Andrea is there to kill the man if he gets violent after he turns.  She knows he will and tries to convince Milton of this before Mr. Coleman is even dead.  When the gentleman dies, they restrain him and Milton begins his questioning.  Thinking that Mr. Coleman cannot raise his hand properly, he unties him and almost gets bit.  Andrea saves his life at the last moment by putting a knife through the head of the newest walker.

What will happen to Maggie and Glenn?  Will Andrea end up shooting any of her friends in the craziness that is about to ensure?  Will Daryl choose his new family over his real one when he discovers how terrible his brother truly is?  Tension is at an all time high now and the previews for next week have me on edge, wishing it were Sunday already.