If you haven’t seen the last two episodes of The Walking Dead, stop reading right now, go watch them, and then come back.  Unless you are one of those people who don’t mind spoilers, then read on.

Last week we finally got to see Michonne and Andrea’s story and boy was it, interesting.  Merle, who was thought to be dead by the group after Rick left him handcuffed to a pipe where Walkers found him, is alive and well; or mostly well at least as he did saw his own hand off to get away.  However, he was saved by this group he now lives with and can’t believe when he finds Andrea hiding in the bushes.  Of course, here the ladies learn that you don’t have to be bit to turn and life takes on a whole new meaning to them.  I did find it interesting that this group calls them Biters instead of Walkers. 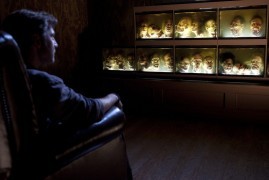 This new group heals Andrea and The Governor gives them a tour and tells them how it is, although he won’t give them their weapons back within the city.  Michonne is right to mistrust him, and even if I hadn’t read that there would be a new adversary, I wouldn’t have liked him.  I knew when he told the pilot of the chopper that he would bring his men back alive he was going to kill them all.  Michonne even suspects as much when she inspects the trucks.  Unfortunately, Andrea is ignoring Michonne, and falling for the Governor.  It probably doesn’t help that Merle is being so friendly so he can get information about his brother.  Wonder what will happen when she finds his head collection.

In the prison, life is moving along.  It seems to be, not idyllic but, at least better now that the group is safe.  Hershel has crutches to move with and the group is planning to start a garden.  However someone has it out for them and allows the Walkers the group locked up to escape; even luring them with a dead deer to make sure they go toward the group.  Of course, this causes chaos and everyone is split into several smaller groups.

T-Dog and Carol end up on their own, and T-Dog sacrifices himself after he has already been bitten, so that Carol has a chance to get away.  Her fate is unknown at the end though as Rick and the others find her kerchief on the ground and T-Dog dead.  Lori, Carl, and Maggie form a second group and Lori goes into labor; nothing like stress from Walkers to induce you when you are away from anyone who knows how to help.  Lori’s body can’t deliver the baby naturally, just like with Carl, so Lori begs Maggie to perform a C-section.  Both know she won’t survive but Maggie concedes.  After an extremely heart-wrenching goodbye to Carl, Maggie cut her open and frees the baby with the knife Carl has.  Somewhere during this procedure Lori passes out and dies.  Carl, as a final gift to his mother, shoots her so that she cannot come back as a Walker. 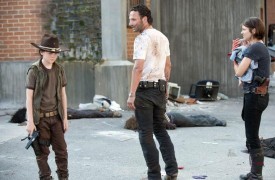 Meanwhile Rick, Glenn, and Daryl, along with the two surviving prisoners they previously locked up, invade the prison to shut down the alarms which have suddenly been turned on.  When they find the room they are in, the one prisoner who Rick chased and left in a yard with a bunch of Walkers, attacks and we learn he did not die.  This prisoner tries to get the other two to kill Rick when Rick’s gun is knocked out of his hand but instead he gets killed by his former inmate.  Perhaps now Rick will trust these two and let them join the group.  Unfortunately for Rick, he realizes too late that there will be no reconciliation with Lori when Maggie and Carl appear with a baby but not Lori.  This devastation may only temporarily incapacitate Rick as the previews for the next episode bring a new challenge, the need to feed the newborn.

The Walking Dead keeps getting grimmer but in one way that might be what could really happen.  Life is precarious even when things look good.  Let’s hope that next week Andrea and Rick come to their senses.