As The Walking Dead returns in full force with The Suicide King, it’s clear things are getting worse for everyone and the end of the season may bring some unexpected surprises.  That might be silly to say since most of the episodes have surprises but this one seems to be headed in a really bad direction for several characters. 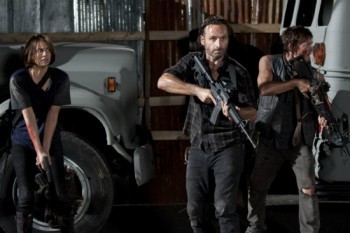 We pick up right where we left off in Made to Suffer, with Merle and Daryl surprised to see the other.  For Daryl it’s seeing his brother alive and for Merle, well I think it’s The Governor’s tone when he takes off the mask on Daryl.  The Governor shows us just how cruel he is here by telling Merle that in order to prove his loyalty to Woodbury he must fight his brother to the death, and which ever survives will go free.  For one brief moment I though Merle might redeem himself when he tells Daryl to follow his lead so they could both get out but that was unfounded I discovered.  Of course, Andrea is appalled to see Daryl fighting for his life.  I think she figured if she stopped the fight and told The Governor that Daryl was one of her friends, he’d stop and let Daryl join the group or something like that.

Before things get too out of hand with the fight, Rick and Maggie come to the rescue of Daryl, and at the same time Merle.  Maggie is not thrilled with letting Merle go with them but a comment of later brings that to a halt.  Merle leads them out a walled up section by ripping through the fence, letting walkers roam into the once-safe Woodbury unchecked. 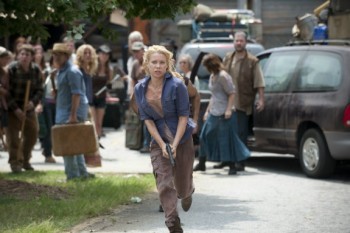 Chaos in Woodbury ensues and the morning brings all kinds of problems for this once peaceful town.  For one, several people want to leave now because they definitely don’t feel safe.  The other problem is that The Governor has locked himself in his home and won’t come out.  Martinez and the other guards tell the people that the biters have been taken care of in town and no one is leaving.  He even threatens to shoot one person who won’t stop honking his horn, which is getting the nearby walkers riled up.  During this confrontation, one man is bitten by a walker who got through the fence.  Andrea takes out the walkers but no one will do anything to help the poor man as he pleads for it and Andrea requests help as well.  The Governor watches this entire sequence from his window and emerges long enough to shoot the man, in front of everyone, before heading back indoors.  Andrea follows on his heels, confronting him about what is happening in Woodbury.  He tells her how he knew her friends were around but when she asks why he never let her in on this knowledge, he just tells her she’s an outsider passing through.  Why Andrea didn’t leave right then I will never understand.  She has seen this man be as depraved as any human can be and yet she remains.

As Rick, Maggie, Daryl, and Merle make it back to the car where Michonne and Glenn wait for them, Glenn goes into a rage over Merle being with them.  He refuses to let the man anywhere near his family after what Merle did to him and especially to Maggie.  Rick doesn’t disagree on that point at least, but Daryl won’t abandon his brother again.  Merle shows his true colors again as he makes snide comments about Michonne and Andrea, insinuating they had some kind of cozy relationship over the winter since it was just the two of them.  When Rick confronts Michonne about knowing Andrea was in Woodbury she just stares at him blankly.  In her defense, the group never said they lost Andrea to Michonne but at the same time why she kept quiet about it when Rick asked, I don’t get.  Rick no longer trusts Michonne either, and decides that she will not stay with the group past healing once they return to the prison.  Despite Glenn, Maggie, and Rick all trying to convince Daryl that they are his family now, he heads off with his brother instead.  We’ll see them again but for now, I have to wonder just how stupid Daryl is.  Blood is blood but after everything the group has been through, and what Merle did to Daryl’s friends, he should have left his brother on the side of the road.

Back at the prison Carol and Carl bond while on watch, which I think for both is nice since they need a child/mother to replace the ones lost.  We also get to see another side of Carol when her and Beth turn a postal box into a bed for lil’asskicker as Daryl calls her.  From these glimpses, I think Carol is no longer that helpless woman she was in the beginning, and for her I think that will bode well as this season goes on. 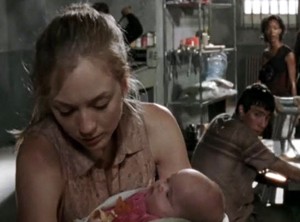 While Beth and Hershel tell Tyreese’s group where they can bury their dead friend, Hersel also tells them not to get their hopes up with staying there.  Sasha remarks about seeing a baby again and mistakenly assumes that Beth is the mother.  She sets Sasha straight about that but nothing else is mentioned.  When the quartet carry out the body, Allen and Ben try to convince Tyreese and Sasha to take over the prison.  Luckily, Tyreese and Sasha are both level-headed enough to realize this would be folly.

When the group returns, there is a very heartfelt reunion, with even Beth hugging Rick.  It shows just how tight-knit this group has become.  Even more so, when Hershel tells Glenn that if he needs anything to let him know because he has become like a son to the man.  Yet there are issues with Maggie and Glenn right now, which I didn’t understand given what they went through.  Poor Carol is informed of Daryl’s decision to leave with Merle and claims she understands why, but when the façade cracks slightly at times, the truth is there underneath waiting to erupt; she can’t believe he left.

Finally, it comes time for Hershel to introduce Rick to Tyreese’s group.  At first, Rick says no to letting them stay but then Hershel begs with an argument of having to trust people again.  Rick is on the verge of agreeing when he sees a vision of Lori and begins to scream at this apparition.  He frightens everyone and the rest of the group ushers Tyreese’s away.  They don’t even fight as they get out before Rick can hurt any of them.

While we thought Rick was fine after Lori’s death, and the phone call he got (or imagined) obviously, he’s not.  What will happen when Rick and The Governor meet now that both men are no longer sane enough for any form of leadership?  Just when will Daryl and Merle show back up and what will Andrea do to protect her friends?  Unfortunately, I don’t think the answers will be quick to come.