This week’s The Walking Dead episode left viewers with some very interesting questions.  Plus a few revelations, or was it only one revelation?  No matter the main group dynamic is changing and Andrea needs to watch herself.

If remember the week before, Rick lost it when he found out that Lori had delivered by C-section but not survived.  This week he seems to have taken a total loss of his senses as he rushes into the prison to find Lori’s body, killing every walker that crosses his path; although there aren’t many.  When he finds the room, he picks something up off the floor.  I couldn’t tell what it was but thought maybe her wedding ring.  There is blood everywhere but no Lori.  Wait didn’t Carl shoot her last week so she wouldn’t come back as a walker?  That is what viewers were led to believe but is it possible he just couldn’t do it after all?  Rick does find a knife and a bloated walker, who is ironically not walking but comatose, which he kills and then proceeds to stab repeatedly to release his pain.

Outside the prison Hershel comments that the baby will need food and soon to survive.  Daryl and Maggie make the run while Glenn digs three holes; one for what’s left of T-Dog, one for Carol, and one for Lori.  Since Rick ran into the prison before the holes were dug, and Carol’s body has yet to be found, two of the holes must be empty.  While Glenn is doing this we get a glimpse of humanity from Oscar and Axel when they state that in their whole lives they’ve only had one person who was like family, not several as Glenn reveals.  He walks away when Hershel beckons from the fence and tells the two they need one more hole.  Their short conversation shows how strongly they feel about their group when Glenn admits they should have killed all the prisoners and Hershel doesn’t dispute the claim.

Once Maggie and Daryl return, hitting the jackpot at the daycare they ransacked finding not only formula but diapers as well, Daryl feeds the baby cooing at her like he has experience with little ones.  It was touching and a bit shocking to see this man who seems like such a hardass handling a baby so gently.  Of course, Carl is asked what her name is and his response is to list all the female members of their group they have lost.  In the end no name is chosen just yet. 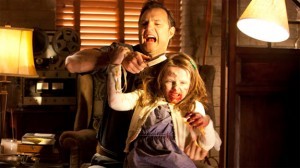 In Woodbury, The Governor throws a block party complete with cold drinks.  Andrea is impressed but Michonne sees it as a front.  She even catches him brushing the hair of his turned daughter through a window.  Yes the man is unstable I think.  Her distrust keeps growing and with good reason it seems.  She takes her sword after seeing The Governor and tours the town, unbeknownst to anyone else.  Michonne finds several walkers in a cell, frees them, and proceeds to kill them all.  She also gets caught by The Governor who, instead of being mad, wants her to join the Research Team.  Here she asks about his daughter Penny and his only reply is “You know about Penny?  Then you know I loved her.”  Interesting that it’s loved not love. 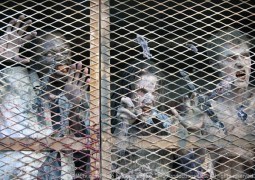 When Michonne asks Andrea to leave, the later is too impressed with how they have wooed her and begs her to stay claiming what Woodbury promises is what they have been hoping to find for months.  Eventually Michonne does leave and Andrea feels at a loss but thinks she made the right decision to stay.  Unfortunately, that changes when The Governor takes her to the nights’ festivities, which include a gladiator fight between Merle and another member of Woodbury, complete with chained walkers to keep things entertaining.  Andrea is appalled but The Governor just says it’s to let off steam.   Andrea said it’s barbaric and The Governor tries to appease her by revealing that the walkers have no teeth to truly bite anyone.  Andrea’s response is that it’s teaching the townsfolk to not be afraid of walkers; she is no longer calling them biters.

As the show ends, we see Daryl put a Cherokee Rose on Carol’s grave.  Makes you wonder if he was starting to get feelings for her.  The biggest shock here is that the room Rick has taken refuge in has a phone, which starts ringing and he answers it.  Who could be calling the prison when most of the world is a walker?