Did you know that the upcoming movie Warm Bodies is loosely based on the famous Shakespeare play “Romeo and Juliet”?  If you didn’t, guess what it is.  Despite actually written for the big screen from the Isaac Marion book of the same name, it is a twisted version of the tragedy everyone loves to hate.

As you might expect a zombie apocalypse has affected the world and zombie R (Romeo) wanders across the town he is in along with other fellow zombies.  R’s best friend is M (Mercutio), and the pair does things together like grunt, moan, or kill humans.  All zombies crave human brains, not for a food source so much as a “high” since they acquire the memories of the person whose brains they eat.  After one such feast, R falls in love with the girl the teenage boy was also in love with.  Due to this new love, R saves her from his zombie hoard and takes her back to the airplane at the airport he uses for his home.  Her name is Julie (Juliet) and when she returns to Citi Field, one of the last remaining human refuges from the zombies, R follows her. 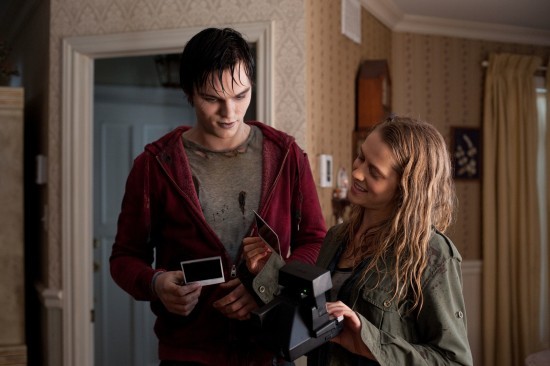 Here he meets Julie’s friend Nora and her father, who is the leader of this human group.  Somehow the relationship which forms changes him and he becomes increasingly human, heart beating again and all.  Other zombies follow but her father still thinks they are monsters who have no way to change.  Of course, it doesn’t help that there are even worse zombies than R and M.  These are called Bones by the “normal” zombies (or at least what we hear in R’s thoughts) because they are nothing but skin and bones.  What makes these true monsters is they kill and eat without remorse where zombies like R feel bad for doing it.

Warm Bodies stars Teresa Palmer as Julie and Nicholas Hoult as R.  Palmer has been in other fantasy films such as I Am Number Four and The Sorcerer’s Apprentice.  Hoult has starred alongside Sorcerer’s Apprentice star Nicolas Cage in The Weatherman and will be Jack in the upcoming Jack the Giant Slayer due out later in 2013.  John Malkovich plays Julie’s father, General Grigio, with Rob Corddrv as M; he is no stranger to comedy films.  Check it out in America when it releases February 1, an early Valentine’s Day present for romantic movie lovers.