I was in a few conversations this week where people were sharing opinions on what makes a game great or what they prefer and want in a game.  The plethora of opinions and personal play styles of games is obviously something that affects every game developer right?  If they make a game that does not resonate with enough people who purchase it, they lose money and possibly as is evidenced by the layoffs constantly happening in the video game industry get shut down completely.  So what makes a game that is worthy of your time and investment?  What do you look for in a video game that makes you drop the $59.99 or sometimes more for a Triple-A title and take that chance?

The migration to e-Sports and Battle Arena games like Fortnite, PUBG is about to go on overload, but is a very repetitive commercial FPS game where you constantly shoot and repeat the type of game that you want to spend dozens of hours on?  Or are you someone who wants the open sandbox experience of a game with no story and infinite crafting possibilities where you can sink 500+ hours into a sandbox without any real linear story to follow carving and making your own adventures in your head while you play?

For me, having been gaming since 1980 I still have a preference for single play campaign games that tell a story.  I like my video games like I like my movies, to immerse me in the world and story the developer was trying to tell.  While some people want a Skyrim or Witcher 3 with 100+ hours of entertainment in a game, I prefer games with 20-40 hours campaign length because there are just so many games and I like to play a game, complete it and move on to the next experience.

That isn’t to say I don’t play open ended sandbox games, some of my favorite are Elite: Dangerous, Ark: Survival Evolved, No Man’s Sky and some rogue like games like Star Traders: Frontiers, Darkest Dungeon, but my preference is toward the RPG/Strategy campaign story experience.  Games like Star Control: Origins which I completed last month and enjoyed all 30+ hours of play time through the story is a good example.  God of War is another example, Horizon: Zero Dawn is probably one of the best games and stories I have ever played and holds a special place as I think about the story and the world regularly months after beating the game.

Some other games up and coming that I am excited about are Mutant Year Zero: Road to Eden which to me looks like a mash up of X-Com, Fallout 2 and Wasteland 2 which has a campaign story and isn’t just one encounter after another.  Red Dead Redemption 2 obviously which just released is another huge game with an open world that I am heavily considering as well though is a bit longer as far as time consumption than my preference in a game just because the longer I play one game, the less other games I get to check out and experience.

But enough about my game preferences, what games do you prefer and what style is your favorite?  Do you play Overwatch or DoTA 2 loving the endless rematches or do you prefer a tighter linear story when you play a game?

Speaking of Horizon: Zero Dawn, the game is like only $16 on Amazon right now which is a steal, and if you own a PS4 you shouldn’t miss out on what is arguably my favorite PlayStation 4 game to date. 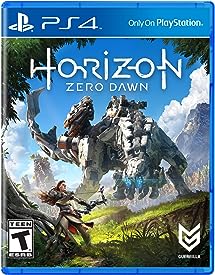