I don’t know about you, but I just had a wonderful pot of homemade Asian fried rice. Something in me tells me that Uncle Roger would kill me, though. I didn’t have ginger, and I used instant brown rice. But who am I to blame? I’m dirt poor and I’m making it work, dang it. Wait, who is Uncle Roger anyway? I’m glad I asked, because you sure didn’t.

To be completely honest, he’s one of my favorite Youtubers, and I’d like to tell you a bit about him. As a precautionary note, his content includes swear words and some suggestive humor, so ask your parents before watching, kids. However, this shouldn’t mean that you should veer away from him either.

I’m sure you’ve heard of how traditional Asian families have quite a different culture when coming to the USA. It tends to be a bit of a culture shock for both the people in the USA and the sea-faring families themselves. Uncle Roger, or “mrnigelng” creates a character that encompasses these tropes and this comedic culture shock, and applies it to Asian food. Specifically, he plays a silly and good-natured Asian uncle that watches videos and reacts to them.

Unlike most reaction channels, he does more than just recording himself watching a video – he adds his own comments throughout it all, and makes it into something very hilarious and unique. He makes the video into his own, almost, while still respecting the original creator(s). The man behind the channel is not actually an uncle (to my knowledge), and he simply puts on a show because he himself thinks his own jokes are quite funny, and I assume that he grew up in a family that is similar to how he’s portraying his own character. As you can see, he has different body language and holds his face in a different way to appear older than he actually is.

Apparently Jamie Oliver used packet rice – not rice he cooked on his own. Uncle Roger’s sin counter just went up. Then Oliver takes a jar of chili jam from the drawer. Even I’m crying in my sleep now. I’m not even a professional chef, but that’s shameful. I used garlic, black pepper, and soy sauce for my cheap fried rice, and that’s better than what’s in here. Then Jamie puts water in his pan. My question is “Why,” and the same question is asked by Uncle Roger. I have to agree.

The only thing that Uncle Roger so far has approved of was the placement of eggs in the fried rice. Sure, he reaches for the tofu, but Jamie then breaks it up with his hands? This makes me sad. Just cut it up, please. I haven’t mentioned any of the jokes in the video due to the slightly mature humor, but trust me – it’s hilarious, just like when Uncle Roger decided to work at a food truck. 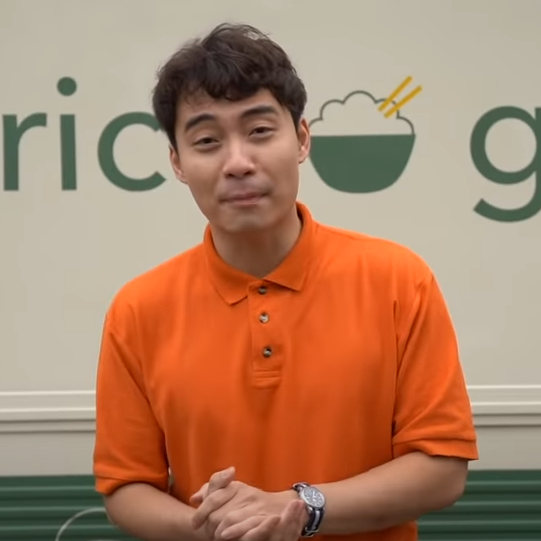 In this little episode, one of the most hilarious jokes so far is how Uncle Roger complains about how his back is bad and he cannot drive the food truck itself, and is teasingly criticizing the girl on how she drives so slowly – then too fast. Personally, after growing up with horrible parents, it’s a nice time having a laugh at a comedic parody of them in front of me.

Next is the first customer to which they ask what the best thing is, then says they’ll order something else entirely. It’s really funny as a fast food worker to see Uncle Roger just call them out like that. Then he asks why tofu is on the menu, as to say it’s bad. The worker responds with “Because we want to make everyone happy.” Then Uncle Roger replies with “But not everybody deserve happiness.” Calling out the service job like it’s nothing. If that’s not comedy, I don’t know what is.

MSG is Uncle Roger’s favorite thing ever – and when he finds out the food truck doesn’t serve MSG, he about has a heart attack. So instead he takes out of his pocket what looks like a literal drug bag full of white powder (MSG – not anything else) and then pours it on the food. Everyone’s having a good time. Then there’s this guy who says he hates soy sauce, and Uncle Roger tells him he just hates flavor – then breaks character and starts laughing his butt off. There’s not much more to say. He’s a great time. Check him out yourself: