Google just announced it last week at their event and now Dragon Blogger fans will have a chance to win the New Google Nexus 7 16GB. 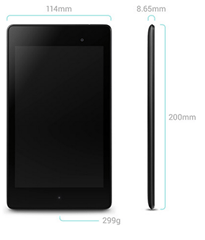 Like the previous version of the Google Nexus 7, the new Nexus 7 is made by ASUS and the new one features a quad-core Qualcomm S4 Snapdragon processor with 2GB of RAM.  This allows higher quality 3D graphics than the predecessor and the new version includes Dual Band Wi-Fi.

Dual cameras now with a 1.2MP front facing and 5MP rear facing camera, the new Google Nexus 7 boasts up to 9 hours of active use battery life with it’s 3950mAh battery.  It also has Qi compatible wireless charging built in.

Audio on the new Google Nexus 7 includes stereo speakers with surround sound, powered by Fraunhofer.  The dual band wi-fi supports Wireless a/b/g/n but I would have loved to see Wireless a/c support which exists in the newest routers but client devices are still slow to support.

The New Google Nexus 7 in spec is better than the iPad mini in nearly every way including double the pixel resolution, equal in camera quality, 4x as much built in memory and a vastly superior processor.  At a price that is still $100 cheaper than the iPad mini.

Enter Now for your Chance to Win a Google Nexus 7

Thanks to the following sponsors joining me SBABZY, TechWalls, CravingTech, Techetron and That Gaming Critic we are able to offer this giveaway and one lucky reader and fan will get a brand new Google Nexus 7 Tablet 16GB and you can increase your odds of winning by sharing your custom link in the PromoSimple giveaway and convincing others to sign up with your referral link, up to 250 bonus entries can be gained this way.  Also it is setup so you can tweet from the widget 1x per day so you can get 30 extra entries if you come back and tweet everyday from the widget (bookmark this site). Remember to do all of the entries, thank our sponsors and if you do write a blog post and become a co-host remember to leave the post URL as your entry validation.  As an additional benefit if you choose to become a co-host you can win $50 cash for hosting the winning entry even if you don’t win (or that in addition if you do win).

This giveaway is open to anyone, anywhere over the age of 18 where rules and restrictions apply. See contest rules for details, but if you live outside the U.S. you have a few options, one you can receive $229 cash via Paypal instead of the Google Nexus 7 due to the costs in shipping and limitations in shipping Internationally directly from Google’s site, you could gift it to someone else in the U.S. or if you are willing to pay for shipping I will order the Nexus 7 delivered to me and then ship the device Internationally to you as long as you are covering shipping costs. This will add time to the delivery as it has to ship to me and then ship overseas to you however.