I was recently given the chance to try Wondershare MobileGo and I decided to try it with my Google Nexus 5. 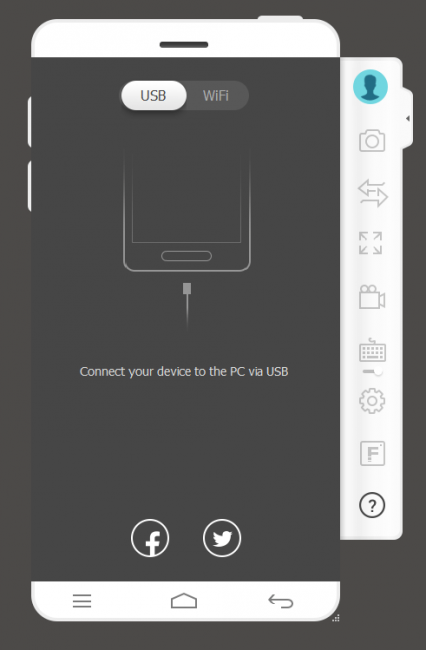 MobileGo is a one-stop solution that lets you manage your entire mobile lifestyle in one convenient place.  The purpose of this program is for you to be able to have a multi-files manager to make it easier to download, manage, import and export your music, photos and videos with the push of a button, in real time, all in one location.  You are also supposed to be able to manage your app collection, backup and restore files and send messages from your desktop. 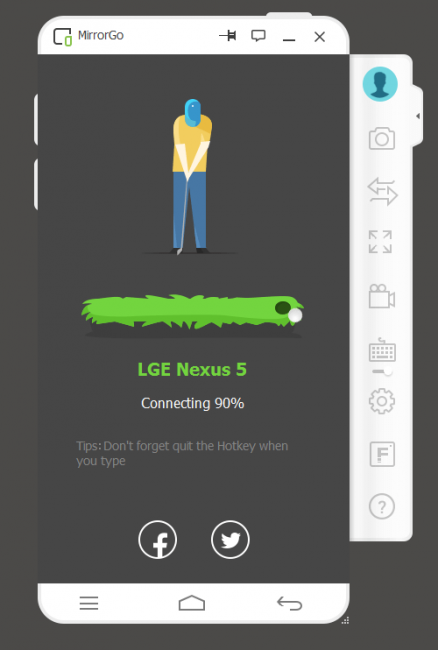 I found that installing the software on my PC and onto my phone was simple and easy and only took a couple of minutes.  The screenshots are from my PC after I have connected it to my phone.  This program came equipped with MirrorGo that allows you to take pictures and record videos as well.  All notifications that your phone receives will
also be received on your computer when you are connected. 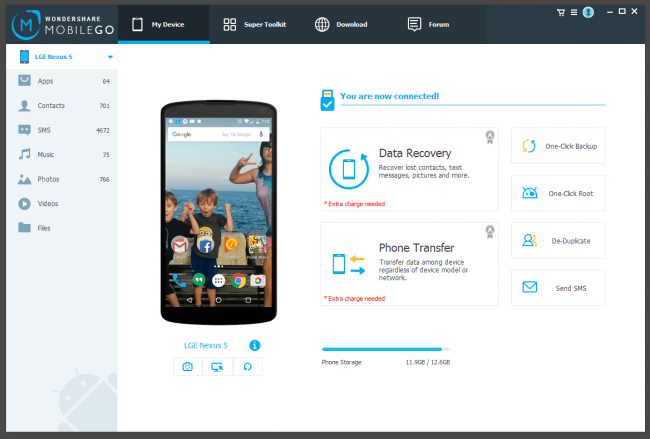 You can see from the picture above that everything as it appears on my phone shows up on the PC.  From here you can manage all your files, apps, music, data recovery and phone transfer.  Everything up until this point had been running smooth and easy for me until I actually tried to manage some of my files. 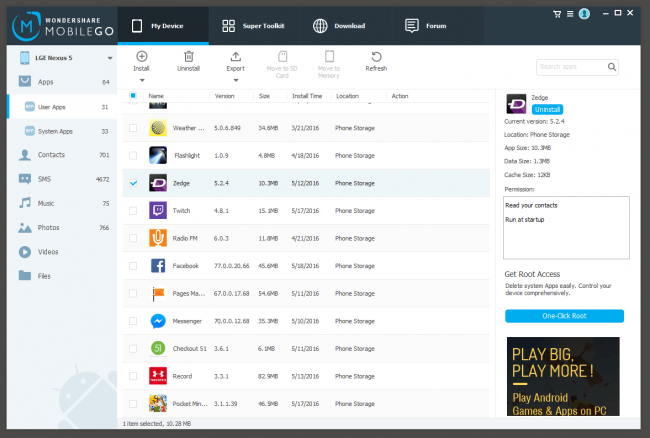 I went to the manage app section and started trying to delete some old and unwanted apps. I would click on them and they would highlight but when I clicked the trash bin nothing happened. All of my apps were still there. I tried going out and back in and still nothing. For me this section didn’t work at all. 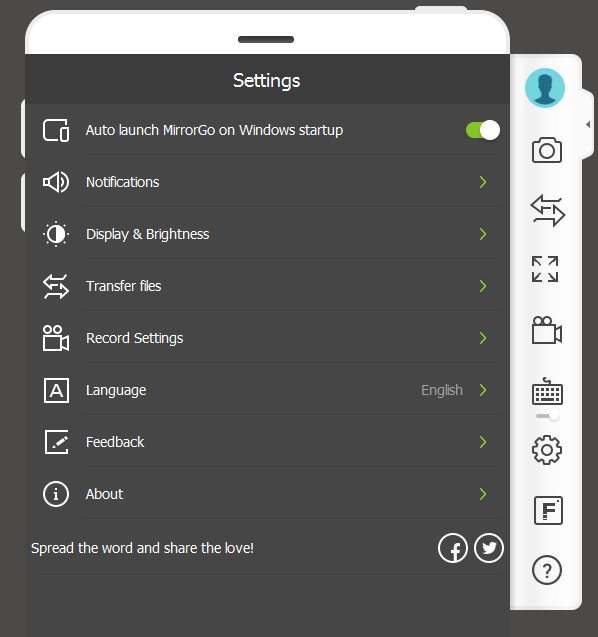 After trying to manage apps a few times the program froze my PC and I had to reboot.  Once I was logged back in, I tried doing a couple more things. I tried again to delete the apps but it still wouldn’t work. I was able to control my phone to take photos and received notifications. 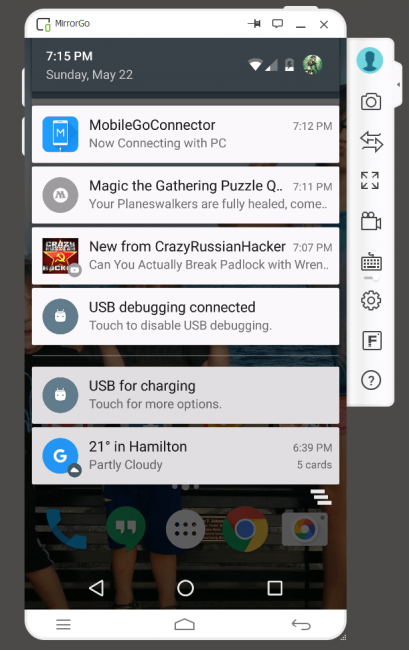 I could manage my notifications and check my messages but that seemed about all I could do. Any time I tried to delete any files it would freeze the program and I had to shut it down and start over.  On my phone while trying to play games if I swiped near the edge of my screen it would open the program. This was also causing my phone to freeze and would restart my phone.

Overall I didn’t like this program and found that it crashed frequently and functions just didn’t seem to sync or work with my phone. There is nothing worse when a program freezes and I have to constantly restart everything. I have since removed this from my phone as it  crashed 3 times in a matter of 20 minutes.

So Justin Germino from DragonBlogger.com here and I am doing the review of the MobileGo application in how it works with the Kingpad V10 Android Tablet.  As you read above Lynda had quite a few problems with it on the Nexus 5 so I wanted to see if there were some issues with the Nexus 5 specifically or I could reproduce some of those issues with my Android tablet as well.  After all Wondershare did have an entire help section specific to the Nexus 5 on their website which led me to believe there just may be a lot of issues with that specific phone model and this software.

Obviously with being a tablet, I don’t have as much in the way of SMS or phone functions to sync and test, but particularly was curious about the app management and other functions.  So the first thing I did was see if Wondershare MobileGo can uninstall and cleanup some apps from my Kingpad V10 Android Tablet.

I selected Antutu 3DBench and chose to uninstall it. 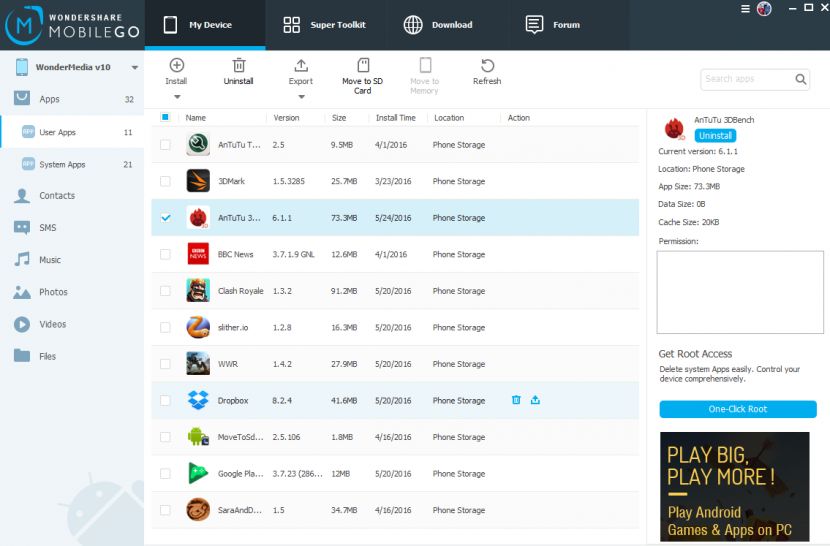 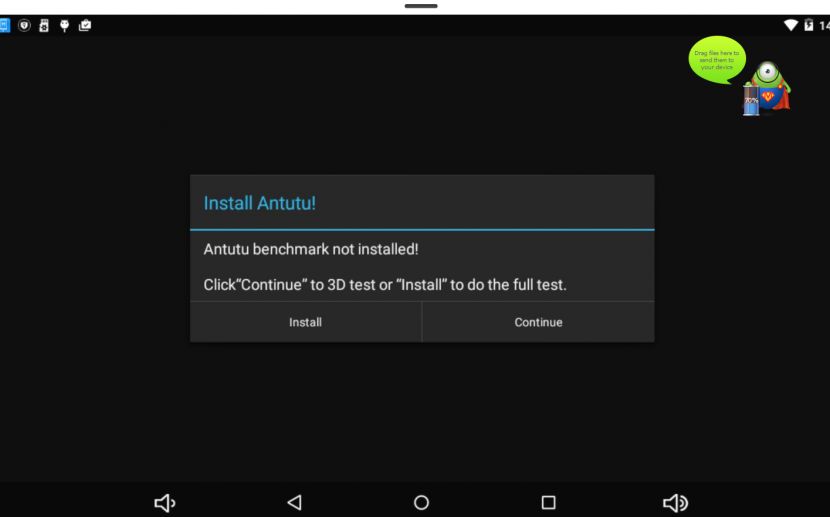 I did a 2nd Uninstall in MobileGo and it did remove it the 2nd time around however, and it won’t show up anymore after a refresh, and doesn’t show up in my app list anymore either on the tablet. 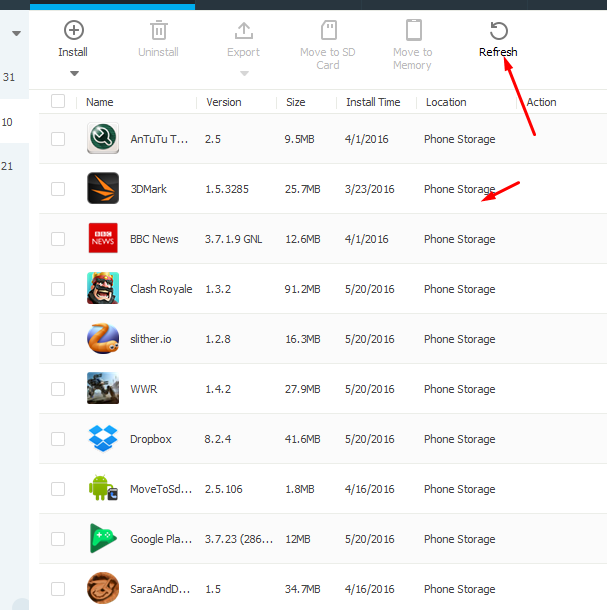 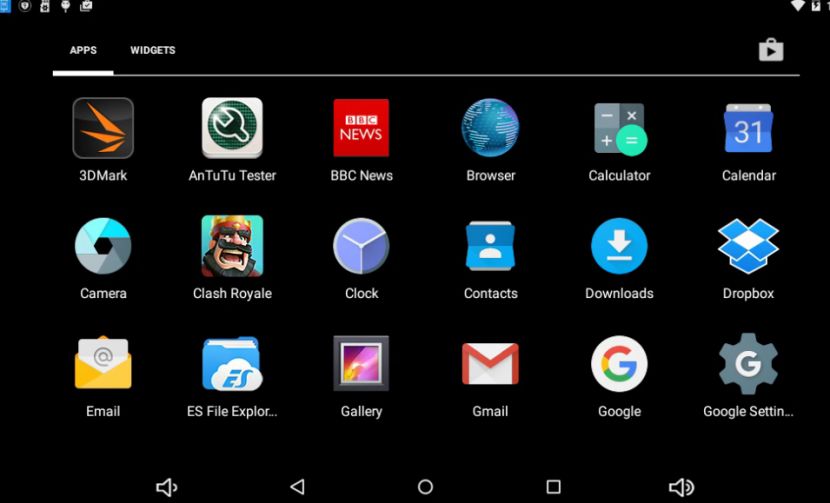 To see if I can reproduce the issue, I then did an uninstall with Clash Royale and other applications and was not able to recreate the issue, they all uninstalled fine the first time.

Now, I was able to see all Google Contacts from the Kingpad V10 on Wondershare MobileGo 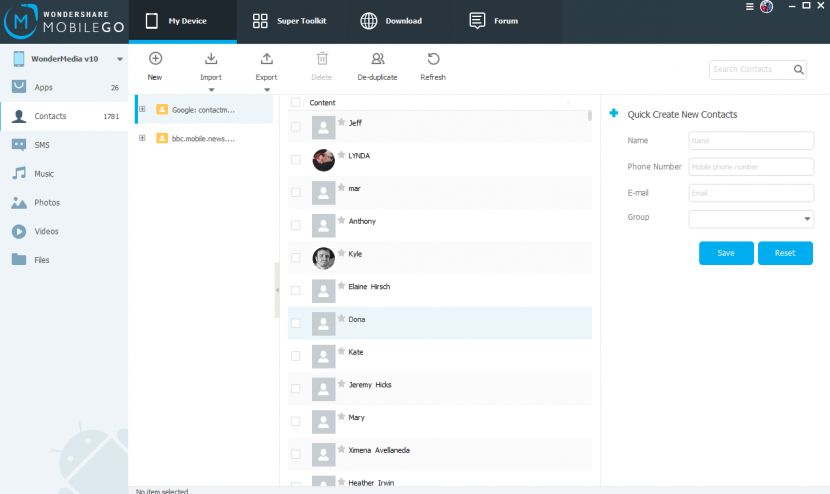 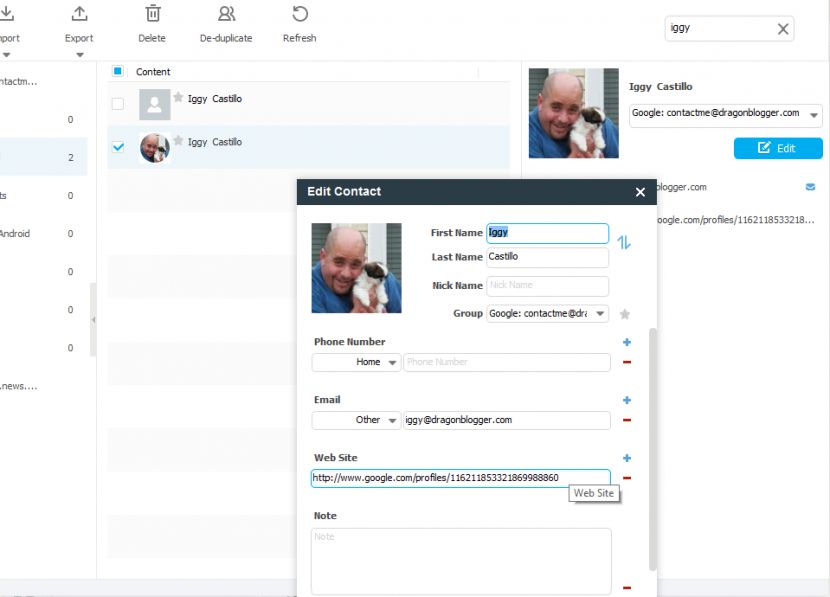 Above is contact info on Wondershare, so I added some edits and confirmed they sync’d back to the Kingpad V10 just fine 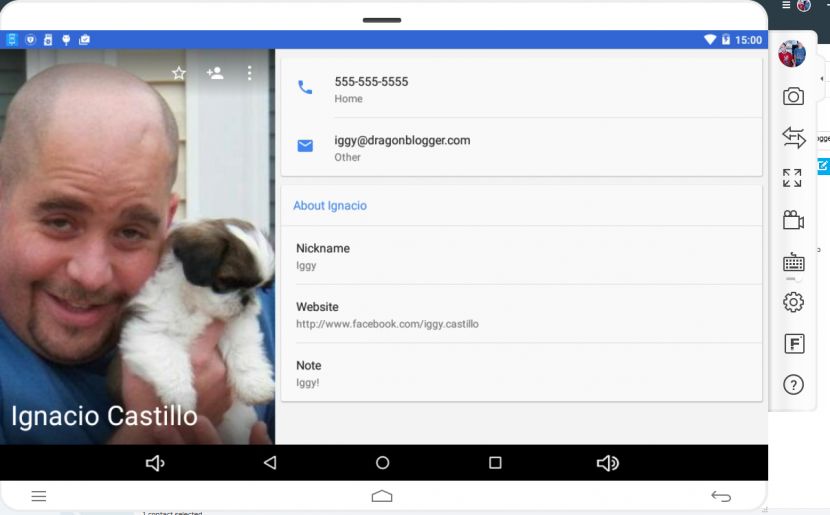 Dragging and dropping files to the Kingpad V10 from Wondershare MobileGo also worked flawlessly, you just drag a file over to that green pill looking creature (is that supposed to be the Android monster?  It will then sync the file to your Android device (in this case the Kingpad V10). 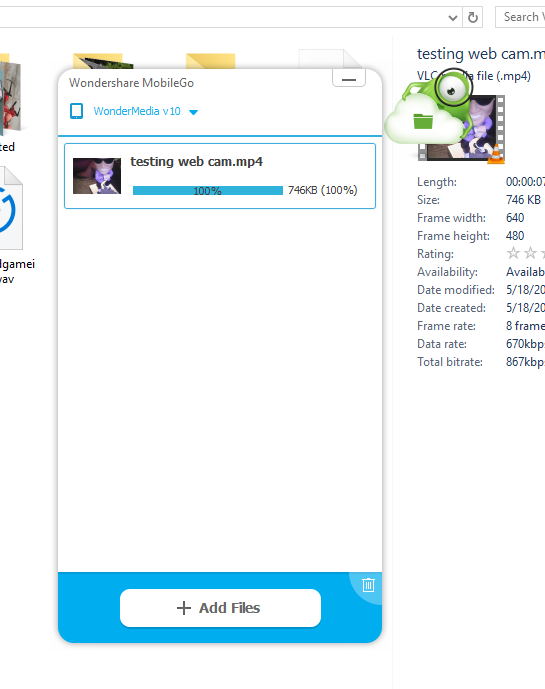 Video synced that I copied over and showed up in my Android Albums just fine. 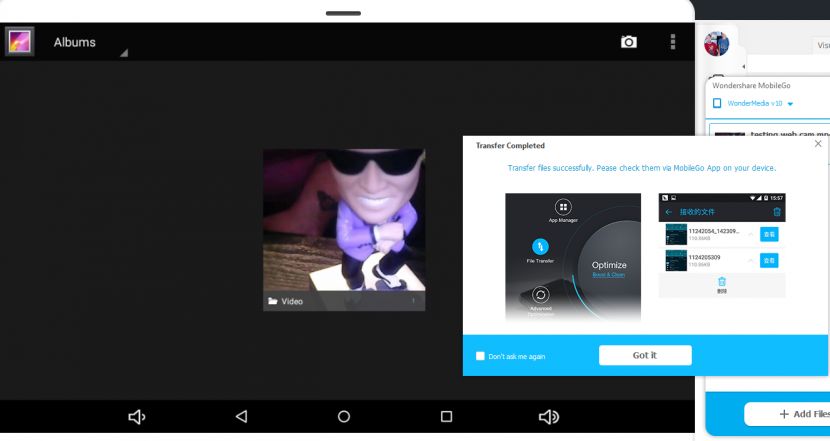 Overall I had no problems with Wondershare MobileGo for managing the V10 Android Tablet, never saw any crashes, freezing and it was quick and responsive when making changes with my phone.  I suspect the software may have some sort of compatability issue with the Nexus 5 that Lynda was using to test with the software.

Disclaimer: This product was provided to the author to do a review. All opinions are 100% authors and authors alone. For more information on our disclosure policy visit: http://bit.ly/dbdisclose