In today’s article, I will make a small comparison between the newest Pandemic Game System, World Of Warcraft – Wrath of Lich King and the classic Pandemic. What are the differences ? Which one will suit you more? 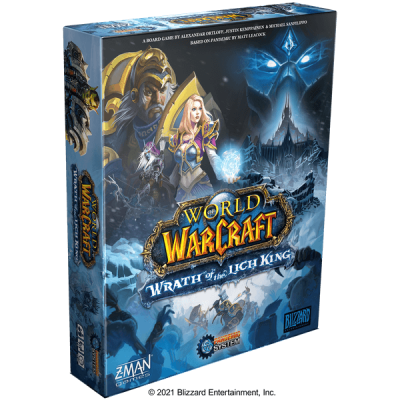 In Pandemic, the Earth suffers from not one but four different diseases represented by four colors (blue, black, red and yellow). Players must take on the role of one of the essential professions to save humanity. Each character will have a special power to use in the game. Different types of epidemics will have different starting areas. However, all players will start at the same place in the US city of Atlanta.

In WoLK, the Lich King and his elite undead army will return to capture Azeroth. Players will be 1 of 7 heroes in the legend, resist the invasion as well as put an end to the Lich King. Each player will receive 1 character card and 1 miniature respectively. On each card, there will be the name, the amount of health of each character, as well as the special feature of each character. In addition, each character has a different starting position.

Main difference:
– In WoLK, each character has a different amount of health.
– Also, in WOLK, in addition to the passive ability, each character also has 1 Special Action, which only that character can do 1 time in 1 turn.
– Finally, the characters have different starting positions in WOLK

– In Pandemic, there are player’s card and the Infected cards. Player cards include City cards, Epidemic cards, and Event cards. In addition to the cards, the 4 diseases are illustrated by corresponding colored squares. The final component is the research centers as well as the Pawns that represent the player characters

– In WoLK, there are a little bit more components than that. There are three types of cards: Hero cards, Reward cards and Scourge cards. Particularly, Hero cards are divided into 3 types of cards: Action cards, Scourge cards and Stronghold cards. Lich King’s troops will be divided into 2 main types: ghoul – small soldiers and Abomination – large soldiers. Of course, it is impossible not to mention the final boss, the Lich King as well as the throne at the IceCrow Citadel. The game will also have 3 types of quests corresponding to 3 regions. The final component of the game is 2 black dice, and 3 Strongholds.

– The Hero card is the biggest difference of the game. Aside from the Scourge Rise cards (which have a similar role to the Epidemic cards), the rest of the cards the real innovations.
There are 4 types of Action Hero cards: fight, defend, travel and heal.

– In WoLK, the enemy has an Abomination element, which will be explained later. 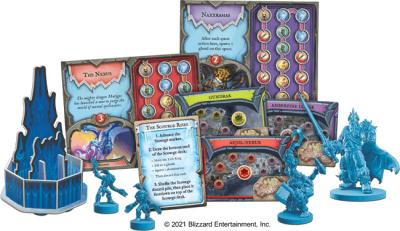 In Pandemic, the player wins by finding cures for these four diseases. To create a cure, players must be present at a research center, discard 5 cards of the same color as the disease the player wants to cure to create a cure.

In WoLK, players have to do three Quests (missions) in 3 different areas. To complete the quest, the player will have to go to a specified city in that area. Each quest will have a different difficulty level, as well as different effects. When completing the quest, the player will get 1 reward card. This reward card can only be used once in the whole game, and it also counts towards the Hand Limit of 7. After completing all 3 quests, the Lich King will return to the IceCrown Citadel to wait for the player here. The player must go to the IceCrown Citadel, do the final quest – destroy the Lich King.

– 2 games have similar development methods. In Pandemic: cure disease. In WoLK: do quests in the designated area. After completing the quest, you will receive the reward. Players can end the game by doing the last quest – kill the Lich King

– Game play is smoother and easier than Pandemic. The fact that the cards have their own use, as well as each Hero has a separate action, giving players more choices. Cards, for me, are one of the biggest factors that help the game improve the Pandemic system. In Pandemic, the cards determine the player’s actions. In WoLK, the player decides how the cards are used.

-The synergies between cards and players are higher in WOLK. In the old Pandemic, cards were used for two main purposes: movement and cure diseases. But in WoLK, players also have to choose the time, which card to use. Because the cards, in addition to giving the player an action or buffing the player’s action, also help the player complete the Quest easier. That’s not to mention the cards, as well as the Hero’s special features that can help other Heroes. This easily creates many Wombo Combos in the game.

– Avoid the situation of Alpha Player: With gameplay with clear goals, and many different choices, it is difficult for players to sit and direct all the remaining players. The calculation of which cards to keep for quests, which cards to use to combine combos with other players’ special features and skills.

– The game still has many minus points. The most annoying thing is that the game still has no mechanism to improve the Action Points in the game. When playing, just sit down and count how many actions can be done. Not to mention in WoLK, many Free Actions make this counting more cumbersome.

– The quest is good but the last quest to beat the Boss is Anti Climax. The Lich King doesn’t have any really outstanding effects. It’s just that the Lich King quest is longer and deals 3 damage per quest. In fact, the last boss quest is easier than the normal quest. 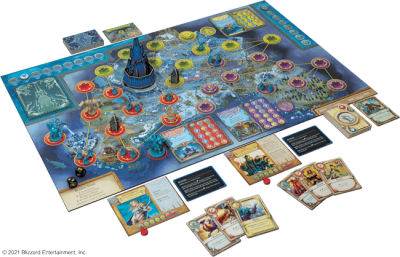 You can purchase World Of Warcraft: Wrath of Lich King at this link