“The Sprawl…hard to believe that just this morning I called this place home. When Lexine and I escaped Aegis VII, we thought we got away from the nightmare for good. I was stupid to let my guard down. I should have known it would crawl its way back to us…” Gabe Weller, P.C.S.I Security Sergeant, The Sprawl.

I must be a glutton for punishment. After being slashed, rammed, ‘facially’ probed, and slowly losing my mind aboard The Sprawl as Isaac Clarke, I am back again as Gabe Weller, trying to save him and a prior Aegis survivor, Lexine Murdock, from the very necromorph outbreak Issac is dealing with. A Code Black is in progress: among the shrieks, screams, and gunfire–you observe the rigs of the mine workers flat-line. The only rigs with any sign of life, were those of Gabe Weller, Colonel Bartlett, and Corporal Price. Gabe is trying to reach Lexine to tell her to hurry and get to safety. Dead Space 2: Severed is a continuation to Dead Space – Extraction (available on the Nintendo Wii), and runs parallel to the events in Dead Space 2. If you experienced any of the horrors during Extraction, investing a couple of hours of your time to play Severed may be time well spent. 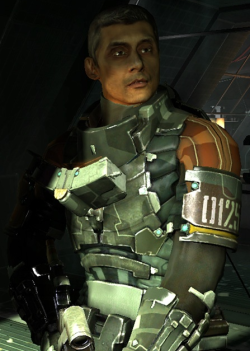 The controls are familiar in Severed (DLC) so there are no surprises there. The only difference is that your character is Gabe Weller. Gabe is escaping the mines to get aboard the Sprawl–so the environment is familiar overall, but is a totally new gaming experience. You do not encounter Isaac, but there is evidence of his ‘passing’ through–as the corpses of dead necromorphs litter the path. Gabe comes equipped with stasis and telekinesis abilities, and functions are similar to the original controls, which is a really good thing because my initial concern that the over all gameplay and feel would change. There are still the mini tutorials, in case you might have forgotten about something.

Gabe handles like Isaac. However, his weapon and rig are different. His gear comes decently upgraded, and there is still the option of finding power nodes, work benches, and shops for upgrades and purchases. If you unlocked any of the weapons or suits from purchasing the Dead Space Collector’s Edition, or beating Ignition, you could buy some items at the first store, (Refurbished Plasma cutter, Zealot suit, Zealot gun, etc.). His rig is a modified security patrol rig, which I did not like. I changed into the Zealot Suit at the first store.  I stayed with the pulse rifle and used the nodes I found to max its power. There is not a reason to truly locate all the nodes (about eight in all) because the survivalist aspect in Severed is not as intense as Isaac’s.

The beasties encountered in this DLC are familiar, and there isn’t any difficulty in slaughtering any of them. There was the return of the “Twitcher,” from the original Dead Space series which was a totally unexpected element to the game. “The Pack,” those annoying “Cysts”–which are great to have around on occasions as they do provide an easy supply of explosive ammo to hurl at enemies, and “Exploders,”were all familiar. The latter of those are necromorphs with an explosive pustule for a right arm, I like these because should you kill them without piercing the explosive sac, it can be used as a weapon.

The environment is challenging, yet not unfamiliar. It took nearly two hours to complete. I noticed that when I was awarded achievements in the DLC, for example, “King of the Hill” which should have added 20 points to my gamer score, did not. So I done a bit of research regarding this and it would seem that there are many in the Dead Space 2 gamer community that had experienced the same problem. Luckily, this glitch was fixed after logging out and beginning the Severed DLC again.

Overall, if anyone expects Severed to be anything more than an extension to the Dead Space 2 release, would be disappointed. However, Severed does provide enough game play satisfaction and does not disappoint in providing another horror perspective of surviving The Sprawl. However, depending on your budget, you may have to decide if purchasing Severed is worth it or not. If you are a die-hard fan of the Dead Space series of games, or are curious as to the whereabouts of the two surviving characters from Extraction, then the Severed DLC it is a solid purchase. If you are like me, and prefer an all out–full run survival horror–then your $7 bucks may be best served in your pockets.

Dead Space DLC: Severed is rated ‘M’ for Mature: Blood and Gore, Intense Violence, Strong Language. It is available for download on the XBOX Live Marketplace for 560 Microsoft Points and on the PSN.