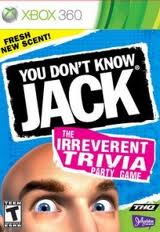 “The Irreverent Trivia Party Game” is BACK!

If there ever was a fun, fast, and furious game for everyone to enjoy all at once, then it is the revamped “You Don’t Know Jack” (YDKJ) for the XBOX360.

For the past several years, trivia game enthusiast had to forage their way through the small sample of quiz games (Trivia Pursuit, Scene it?) to try to find some intellectual stimulation. Touring through the XBOX360 demo marketplace, I stumbled across the ultimate in quiz show games.  The one trivia game that rules them all; “You Don’t Know Jack”—Developed by Jellyvision—since the 90’s, it’s popularity crosses all media platforms! The game can be played alone or with up to four people—local, or online. Each game is set up like a 10 question episode or quiz show, narrated by Tom Gottleib, the invisible quiz show emcee “Cookie Masterson” who not only serve up the quick witted questions in the game, which covers a wide range of dizzying topics, but also deals out some well-deserved comedic insults that keep you puzzlingly entertained. Each round contains a series of multiple-choice questions and four answers.

Many of the questions are multiple-choice, and using the 360 controller you select the correct answer, by pressing the yellow “Y”, red “B,” green “A,” and blue “X”  buttons that coincide with the correct answer on the screen. Your score is added towards with each correct answer or deducted for each incorrect answer. You can score bonus cash for answering the question the fastest out of the other players. The faster you answer, the more money you stand to win…or lose. Amidst the catchy theme music and the hysterical commentary, there are segments within the game that pose a different set of challenges.

Each 10 question episodes feature’s a DisOrDat round that gives those lagging behind an opportunity to catch up with the leader in the game, by answering as many questions as quickly and accurately as possible. But keep up—these rounds can be lighting quick and you may find yourself trying to reflect upon your answer for the last question– and miss the opportunity to be first to answer the next. The episodes are lively and exciting, but the game

may begin to feel a bit too repetitive.

YDKJ has a little PVP action going on, allowing you to virtually “screw” with your gaming companions, by disrupting their view of the answers and/or questions in-game. I think this is one of the best aspects of the game but use your “screw” wisely, because the misuse of an incorrectly calculated once-per-use  screw per episode could potentially backfire on you; you can either win a cash bonus or you could stand to lose…a lot.

What I really enjoyed is when you do choose the right or wrong answer, your response is met with derisive one-liners, which are 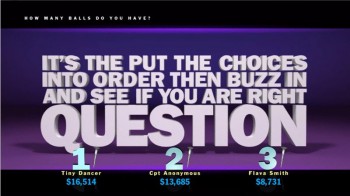 strangely motivating, with a tinge of bitter irony, responses, which are oftentimes well played.  The game comes equipped with 73 episodes, with each taking about 12 to 14 minutes to play, and of course, it would not be an XBOX 360 game if it did not come with DLC’s—which are currently in the works and soon on their way to the XBOX Live marketplace.

Overall, YDKJ is the ultimate in trivia games. With trivial rounds like DisOrDat, Shorties, and Jack Attack will most certainly keep you on your toes and the new features of the game keeps you on your toes and better yet, you just might learn a little something here and there. “You Don’t Know Jack” is just one of those games that will keep you  and your company engaged from beginning to the very end.

You Don’t Know Jack for the XBOX360 is rated ‘T’ for teens – for crude humor, drug references, language, mild blood, and sexual themes. YDKJ is available for the Xbox 360®, PlayStation®3, Wii™, Nintendo DS™ and DSi™, and PC.