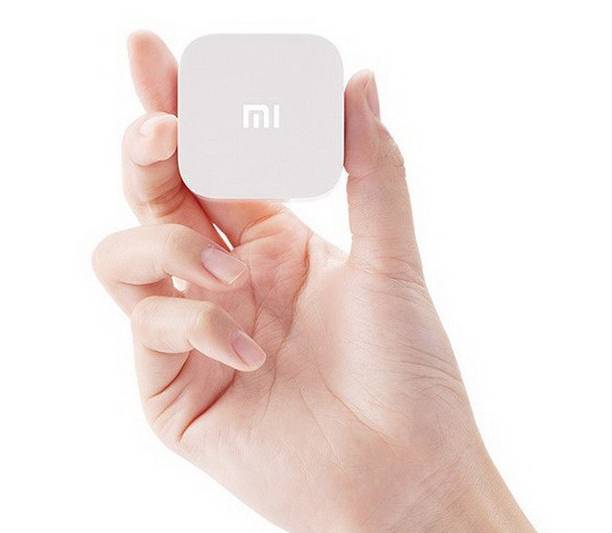 Xiaomi at it’s launch event in Beijing recently announced a little device, the Xiaomi Mi Box mini. The Xiaomi Mi Box mini is essentially the smaller version of the Mi Box set-top box. As the name itself suggests, the device truly is, mini (may as well call it tiny). The ultra compact Xiaomi Mi Box Mini will go on sale from January 20 and with a price tag of around $30. The device is so small that when plugged into a power socket, can easily be mistaken as a regular USB phone charger.

The device runs on Android version 4.4.2 KitKat OS out of the box with a custom user interface based on Xiaomi’s MIUI software optimized viewing on bigger television screens. Though the user interface is in Chinese, it has Google Play Store installed, so even if you can’t read Chinese you might be able to install some English language apps (such as the SPMC media center app) from the Play Store to make the Xiaomi Mi Box Mini useful.

The Xiaomi Mi Box Mini has a cubic design very similar to that of the Apple TV, square shaped with curved edges form factor. Despite it’s small size, it houses a quad-core MediaTek Cortex-A7 processor clocked at 1.3GHz. The device has 1GB RAM and 4GB of flash storage in built. The connectivity options are dual band WiFi 802.11b/g/n support as well as Bluetooth 4.0. It also supports DTS 2.0 audio, Dolby Digital Plus as well as HDMI 1.4a. It supports 1080p 3D video output along with support for H.264 and H.265 codecs as well as MPEG 1/2/4 and VP8 thorough the only available HDMI port to stream content like TV shows, videos, and more.

The remote provided gives control and is connected via Bluetooth. Their is however, no support for a Micro SD card or a USB port as compared to it’s bigger sibling (given it’s ultra compact form factor) so you’ll have to rely on the Desktop remote installation app to side load any app(s). Since the device is plug and play, the power unit is also built right in.

The box is available in different color options including red, blue, purple, yellow, and orange. Users who purchase the device will also get access to content of about 1.4 million hours distributed or licensed by GITV.

The Xiaomi Mi Box Mini is essentially a tiny box that turns an ordinary TV into a smart TV. That’s hardly enough to make the Xiaomi Mi Box Mini stand out from the rest — Amazon, Apple, Google, Roku, and many other companies offer similar devices. The most remarkable thing about the Xiaomi Mi Box Mini is probably the design: it’s one of the smallest devices of its type; measuring just about 1.8″ x 1.8″ x 1.5″ and plugs right into your wall jack or power strip/socket. It’s also one of the cheapest: it sells just for about $30. The device should sell in really good numbers in China and will go out of stock within seconds if they choose flash sales. If you happen to reside anywhere else, the device is a good buy if you are getting it for a decent price since you’ll have to shell out a few extra $.