You may think that social media is private. It isn’t. For that reason, you need to be careful of what you post. Here are some things to watch out for.

Really, it gets quite annoying, doesn’t it? All those people telling you what you can’t and can’t do. All those people acting like they’ve got it so much better figured out than you do, with their rules and their finger wagging. Couldn’t they just shut up already?

That said, some things and lists should be considered a little bit more carefully than others – and what you do on the internet and social media is one of them. After all, what you put up today will never go away. And so, perhaps it might be a good idea to not burden your future self with pounds of virtual baggage. 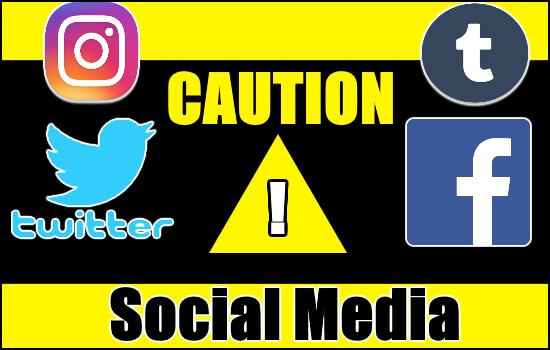 To that end, here is a list of things that you really should never do on social media. They’re not rules. Ignore them if you like, but don’t say I didn’t warn ya!

Social media is not a private place. It might sometimes feel like only your friends are getting access to that information, but that is simply not true. Police and other government officials can get court orders to look at your social media content. Even more worryingly, when they get such an order for people that you’re attached to, they automatically get access to your conversations with that person as well.

Heck, you might even end up pissing off one of your friends so much that they end up taking things that you’ve put on your social media and handing it straight over to the police. Then they don’t need any kind of court order.

And so, whatever you put up is very likely to be discovered by the authorities sooner or later. And that is just asking for trouble. So, if you’re going to do something illegal, keep it away from the Keyboard (and your camera).

People can do tremendously harmful with personal information, like your birthday, your social security number and your full name. Heck, with just your full name and your address people can already steal your identity and then engage in illegal activities in your name and in that way drag your name through the mud. Then you’ll be left trying to clear your reputation to clean up your credit record and unable to do a whole host of things, simply because somebody stole your identity

The most important thing to note here is that this information is often on documents that you may want to share. For example, a class schedule might have the information there and when you’re sharing what classes you’ve got, you might accidentally be sharing that information as well.

Similarly, you might take a photo of one thing, not realizing that there is a whole lot of information available for people to steal in the background. One child predator, for example, was caught because he’d taken a picture with medicine in the background and they were able to figure out who he was based on that. If the police can do it, so can the criminals.

It seems like such a good idea at the time – a picture where you’re taking the biggest bong hit of your life is sure to amuse your friends. The thing is, it won’t amuse your future employer, or the university you want to apply to, or the straight lace parents of the girl or guy you really want to marry.

People have been dismissed for less!

Most schools have rules that state what you can use their computers for. One of the things that aren’t likely to be on there is ‘social media’. That might just get you into a whole host of problems. And who really wants to serve detention because they wanted to put up a status update?

In fact, don’t use the computers for anything that the school really shouldn’t know about. So if you want to look at writing company reviews, do it from your smartphone or the comfort of your own laptop. At least then the chance that you’ll get discovered surfing those sites is hugely reduced.

Post nasty comments – even if you think they’re funny

You might not realize it, but somebody else might think of you as a bully (here are some of the warning signs to look out for). Their lives might be significantly worse off and they might hate coming to school because of the jokes you makes and the things you say.

Bullies rarely believe that what they’re doing is bad. That’s because they’re not on the receiving side of the treatment. They don’t feel ostracized, rejected and alone.

Sure, there’s a chance that the person you’re making jokes about gets that they’re just jokes. There is also a chance, however small, that your words contribute to them taking their own lives. And yes, they might have been a bit messed up, to begin with, but do you really want to tease anybody – however, confused – to an early grave?

So don’t do it. Don’t pick on anybody online, or offline for that matter.

Sure, you want to tell your friends where you’re at so that they can come your way if they’re in the neighborhood. The truth, however, is that it isn’t just your friends who are aware of those check-ins. People who you don’t know (And who know far too much about you) might be following your digitally through these kinds of check-ins as well

And if you check in at some distant location, where there are not likely to be other people, there is always a chance that a digital stalker can become a physical one. So don’t give them that chance!

In fact, consider checking in only when you’re leaving a place. Yes, it’s not as much fun, but at least if people mean you harm, then you won’t be there to receive it when they arrive.

Social media is a fantastic way to share with your friends and your family what you’re up to. The only problem is that quite often it isn’t just your friends and your family who will have access to it. People break into accounts all the time, while people that you might have thought of as friendly might not turn out to be quite as nice and wonderful as you took them for.

Don’t tempt them. Don’t give them information that they can use against you. Because when they do, the damage from a tiny little slip up can be immense and follow you around for the rest of your life.

For that reason, always exercise caution, always consider what you’re doing and always look back over what you’ve done to erase those things that weren’t well considered. Because though nothing ever leaves the internet, you can certainly make it a lot harder to find.

Malia Keirsey is an experienced blogger at Writersquad.co.uk and expert in social media marketing. She has a master's degree in sociology and a lot of achievements in web design. You can follow @MaliaKeirsey on Twitter.