I was always looking for a way to make it easier to move movie and video files between my PC and my iPad device.  When I discovered what Air Playit was and was invited to test the service myself I had to see if it provided the features I was looking for.

Air Playit from Digiarty Software, Inc. is really 2 applications.  1 Installs on your PC or MAC and acts as a media server or your own personal cloud storage.  The other installs on a compatible iOS device and currently supports Apple iPad, iPhone, iPod touch with firmware 3.0 or newer with Android support coming very soon according to the company.

The way it works is that you select which media library folders you want to “share” and have accessible via the server application running on your PC or MAC.  This is done by simply going into the application, clicking on Shared Folders and sharing folders that have media you want to stream to  your iOS device or download to your device offline (more on this later). 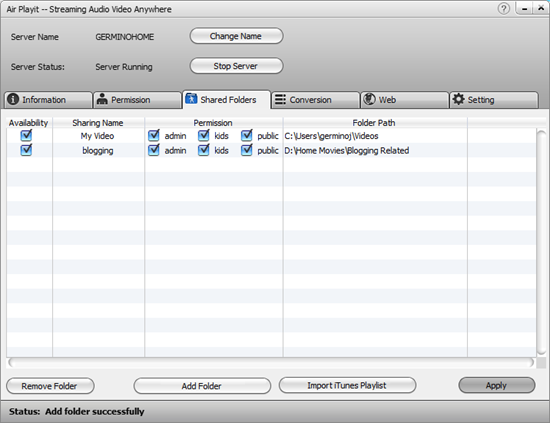 Now while iOS device is on the Wi-Fi network and has the Air Playit app installed you can stream any media file that you are hosting on your PC or Mac to your iOS device.  This allows you to play almost ANY Media file type on your iPad, iPhone or iPod touch people without having to do any media conversions beforehand.

Air Playit supports the following media files for streaming to your iPod, iPhone or iPad device:

Since I have an iPad 2 now I decided to test the software out end to end on both my PC and the iPad 2 itself.  I setup my “blogging” video’s to share and I wanted to test both the online streaming and offline download of media to my iPad 2.

In my tests it works well and the media quality is as good as the original copy you are streaming to your iPad.  This basically allows you to setup your own “Netflix” style hub of media files you can stream to family members who have iOS devices in your house and want to watch something on them.

One of the biggest features I want to see is this product come out in the Amazon Android app store.  The Kindle Fire with 8GB limited storage would surely benefit if you could live stream your movies to your Kindle Fire while within your Local Wi-Fi network and this is a great way to provide video’s for the kids to watch or education video’s you keep local and stream for home lessons.

If you have a collection of media files on  your PC and want a way to stream them to your iOS device without tying up the local storage, then the Air Playit application works perfectly for this.

Air Playit has now been released for Android as well, stream your media from your PC to your Android devices while on your Wi-Fi network now as well!