The Alien franchise has been the cause of many a sleepless night since the first Alien film released back in 1979. In the four decades since, Alien — and its spin-off franchise, Predator — has become one of the most recognizable names in sci-fi horror, its influence extending outside of film into other realms of media.

It should come as no surprise then that a brand as big as Alien would spawn video games. In theory, it’s a match made in heaven. The elevated immersion made possible by the interactive nature of the games’ medium makes it particularly well-suited for Alien’s unique brand of sci-fi, cosmic horror — at least on paper. 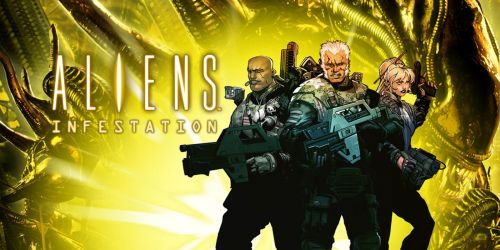 So far, the Alien games we’ve highlighted have been action-packed affairs, more in tune with the adrenaline-packed sequel Aliens than the original film’s horror. Aliens: Infestation, released on the Nintendo DS in 2011, manages a careful balance between the two while offering some innovative gameplay in the process.

Set on the Sulaco, the alien-infested Colonial Marines warship where Aliens concluded, you control a four-man squad of hardened Marine grunts investigating a mysterious message. Not only is the pixel artwork top-notch, the game absolutely nails that atmospheric, slow-burning dread so crucial to a great Metroid clone. Permanent death makes it all the more thrilling, and despite the rather throwaway nature of the game’s 19 characters, every death hurts because that’s a life down where each one counts. 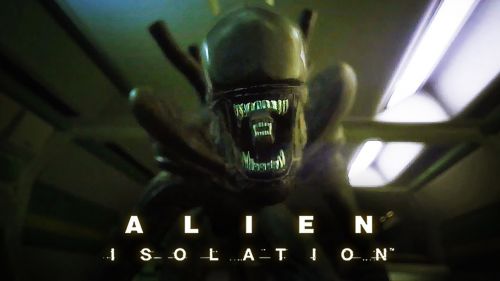 It only took 35 years, but we finally got a legitimate horror game based in the Alien universe back in 2014. Developed by Creative Assembly and published by SEGA, Isolation follows the engineer daughter of Ellen Ripley, Amanda, on her journey to discover the location of her missing mother.

From the get-go, the developers set out to emulate the atmosphere of the original film, emphasizing stealth gameplay and survival horror mechanics in favor of the run-and-gun style we got from previous titles. Instead of blasting aliens willy-nilly, Amanda is trapped alone on a ship with a xenomorph stalking her every movement. That claustrophobic feeling of helplessness really makes Isolation stand out from the pack.

To really lock in the visuals and feel, they paid special attention to incorporating a retro-futuristic aesthetic that depicts what the filmmakers thought the future would look like from the 1970s. The attention to detail is truly commendable; it’s a shame the game didn’t sell very well, despite raving reviews. On that note, get your PSN Gift Cards and experience this beautiful game on your own!

Predator 2 for the Amiga is a side-scrolling shooter that’s also viewed from an over-the-shoulder angle for some strange reason. The protagonist isn’t even running sideways, he stands still while the environments scroll by in front of him.

Your character, Harrigan, is a motorcycle cop who finds himself in the middle of a drug bust. He’s a jumble of outlines that sits in the center of your screen, sliding horizontally across urban locales blasting thugs and gangsters as NPCs run screaming through the streets. Your guns make no noise; all you get is a sparse synth soundtrack that completely contrasts all the chaos.

Say what you will about the catalog of Alien games, but there’s no denying these developers weren’t afraid to experiment a little. Aliens: A Comic Book Adventure is a point-and-click adventure that attempts to merge cutting-edge (at the time) CGI and a unique comic-book character style. It doesn’t work at all but A for effort.

That isn’t to say Alien isn’t prime source material for a great point-and-click game. Solving puzzles while avoiding xenomorphs? That’s just good game design. But none of the elements in A Comic Book Adventure work. The art is atrocious, the music’s bubbly sound is completely incongruent with the game’s grim tone, and the actual story reads like bad fan fiction.

Perhaps in the hands of a more capable developer, A Comic Book Adventure could have been something great. It’s too bad we got this mess instead.

Playing as the monster in a horror game very rarely turns out well. After all, the fun comes from the contrast in power between the hunter and the prey. When you’re the overpowered hunter, there isn’t much sport to be had in the hunt.

Aliens vs Predator: Requiem tried to get around this problem by pitting Predator versus Xenomorphs. Honestly, sometimes it works. The Predator’s countless toys of destruction are a lot of fun to mess around with and encounters with your Xenomorph rivals can often be heart-pounding, exciting battles. It’s too bad the level design is so bad, compounded by the wonky and overused stealth mechanics that made most levels an absolute trudge to get through. 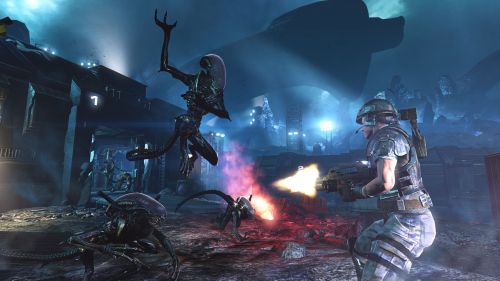 You knew this one was coming from a mile away. The story behind Aliens: Colonial Marines is a juicy one, full of lies, scandals, and comical finger pointing between the developers and publishers. Unfortunately, there isn’t enough space for us to get into the nitty gritty of the whole affair, but Matt McMuscles has a great summary of it here.

The short of it, though: Colonial Marines was the Fallout 76 of its time. Early previews and trailers were promising, and Aliens fans thought they were finally getting the first-person shooter this hallowed franchise deserved. Then the game released and the reviews dropped.

The Aliens: Colonial Marines we eventually got was a generic military shooter whose ties to the Alien franchise were merely aesthetic, but what really got players riled up was the horrible bugs that made the whole experience virtually unplayable. The enemy A.I. was genuinely stupid, with the series’ iconic monsters often seizing up or ignoring the player entirely. The entire ordeal reached new comical heights when it was revealed that a simple typo was the culprit behind all the weird behavior.

There would be no respite for SEGA nor Gearbox, some internet sleuthing uncovered undeniable evidence that the footage shown off at all the conventions and events prior to release had in fact been pre-rendered, disproving SEGA’s claims that it was real-time gameplay. The outcry was so great that it eventually resulted in the filing of a class action lawsuit accusing SEGA and Gearbox of false advertising.

Those were our picks for the best and the worst of the Alien and Predator games. It is certainly not an exhaustive list, but when you’ve got literally four decades and six home console generations of video games to pick from, some are going to be overlooked. What games do you think deserve a shout out (or a call out) on this list?