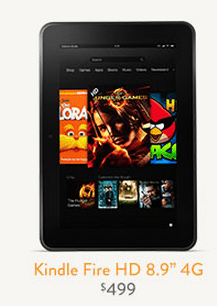 Probably the most impressive is the $499 tablet comes with a $49.99 (1 year cost) 250GB per month 4G data plan package.  So if you look at the savings compared to other tablets in the same size range with a data plan from your wireless provider you could be saving hundreds of dollars per year.  The Kindle Fire HD has a 1920×1200 resolution and supports full HD and though it isn’t the Retina display like the 3rd Generation iPad the Kindle Fire HD is geared toward media and entertainment. 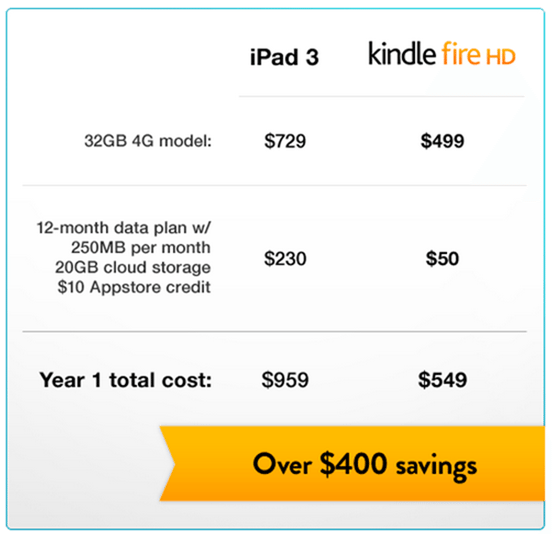 Stereo speakers with custom Dolby Audio should negate the complaints people had about the previous Kindle Fire’s speaker limitations.

You can also get the Wi-Fi only version for $299 which is cheaper than the 2nd Generation iPad.

the Kindle Fire HD also now has a HD video camera and comes with Skype so you can make video chat calls with friends over the Skype platform.  Bluetooth is also added which resolves both of the biggest “wanna see features” in the Kindle Fire from the previous generation.

One complaint about the Kindle Fire was that for kids, it wasn’t kid friendly enough and Amazon announced something coming next month called. Kindle FreeTime which is a personalized experience for kids. This will allow you to set daily screen limits, and give access to appropriate content for each child and comes free on every Kindle Fire HD.

Probably even more impressive is the 7″ Kindle Fire HD for the price now. 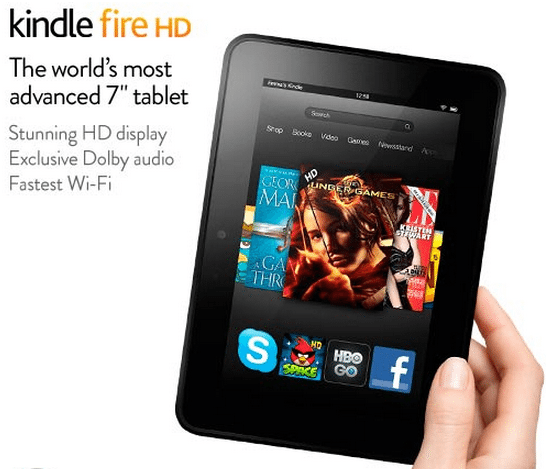 The Kindle Fire HD 7″ supports 1280×800 HD resolution rather than 1920×1200 but is still more than sufficient for full HD, you also get 16GB of space and a much more powerful Kindle Fire thank the previous model that was also $199.

All Kindle HD models have two antenna’s with dual band support and claim much better bandwidth than any other tablet model.  The power of the Imagination PowerVR 3D graphics core should be enough to negate any complaints about sluggish games as well.

Amazon’s answer to the Google Nexus 7 was swift and strong, offering a tablet that does strongly compete at the 7″ model for the same price and Amazon has a stronger offering with it’s Amazon Prime and entertainment choices.  Google still has a much more diverse set of applications available in it’s Google Play app store, but Amazon probably won’t take long to catch up.

So based on the new Amazon Kindle Fire HD do you think it will keep its reign on the 7″ tablet market or will Google Nexus 7 eat into it’s sales?  Do you think Amazon’s 8.9″ Kindle Fire HD will be enough to compete against Apple’s 3rd Generation iPad?

Even more interesting, is how will Apple fare with the 7″ market considering that if the rumors are true they will be showcasing a 7″ iPad Mini on September 12th which probably will be at least $50 more than the Kindle Fire HD 7″.

Finally, Amazon also announced that they still have the Kindle Fire available still with 8GB of RAM but an updated processor. The 2nd Generation Kindle Fire (not HD model) now has a low cost of $159 and is probably the best tablet on the market for that price range bar none!