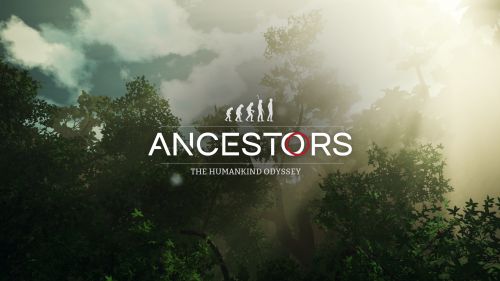 Survival games have always been, in my opinion, the medium that bridges the exciting and new environment that the game will bring, with the cruel reality of survival that mimics real conditions out here in the real world. Games like This War of Mine that mimics survival during war times or Frostpunk, steampunk RTS that pits society against the cold. But if you were to tell me that I’ll be playing a game where I get to control an ape, figuring out stuff out so that I could evolve into the species that humans are today, my questions would be: who’s overambitious idea is this? And hold on, that’s a real game, and it’s out?

Welcome to the world of Ancestors: The Humankind Odyssey, where you take the role of our early ancestors in figuring this evolution thing so that we can be the dominant species on this planet. There’s a real genius behind the game, and it’s one of the original minds that were behind the Assassin Creed franchise, so the hype is there. Now if you’re picturing apes doing Assassin Creed stuff, I’m sorry, no. What you’ll get instead is an unforgiving game that will pit you against predators that are always on the prowl for your delicious ape meat, and it’s your prerogative to figure out how to survive in this harsh land that’s has been simulated to be as close to what our ancestors had to endure in. 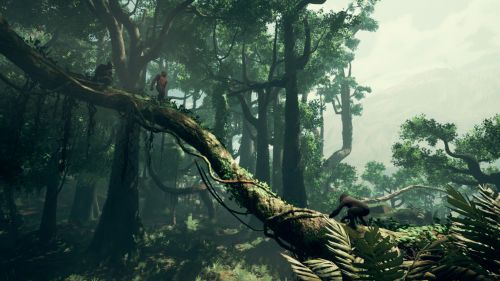 There is no story to the game, but essentially your objective in this game is to evolve your character via multiple generations and with each generation, your character’s traits that you’ve learned will start stacking up as you make more babies that will grow up and mate. So, the cycle continues till you get to homo sapiens. This is an immense game in terms of scale. The game includes a progress meter or sorts with a fancy scale that pits your gameplay progress along with scientifically accurate (?). This sort of functions as the overall objective indicator for the whole. 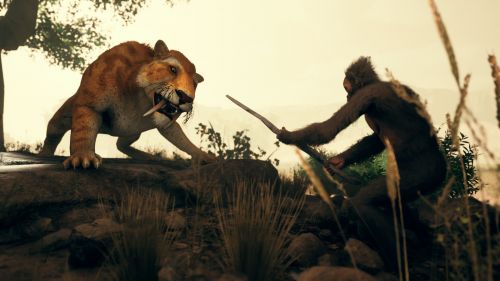 First off, Ancestors… is a survival game unlike any other. After the prologue, the game starts off with a warning that no help will be given starting from that point. It’s probably done purposely as to simulate how clueless we were as a species in our earliest form, which was given since complex cognitive functions were just starting to form. And most of the gameplay revolves around visual and sound cues which will help you to survive and build tools along the way. The game has beautifully set up the boundaries in which the ape can explore and instead of putting the expected text that warns that you’re out of your map area, the game instead start giving visual cues and sounds of beasts which gives the cue that your character is scared to death moving out of his usual grounds. This can, of course, be expanded as you slowly explore the terrain and learn more things about your surroundings. 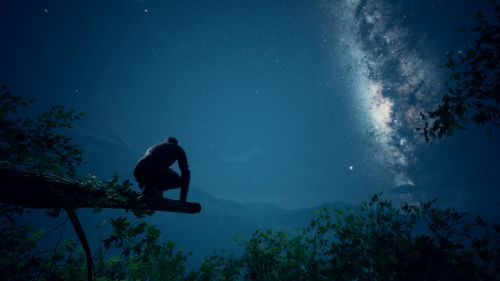 Now, I don’t know about you but give me the ability to swing on branches and tough jungle terrain, I will pay top dollars for that experience. Imagine Spiderman but more primordial. The game features exploration and discovering new items in their surroundings. Find a new edible and your current ape will start developing immunity to a certain disease, which will then be passed to your next generation. Players can start making tools and learn various skills which will, in turn, grant players points to be used in the skill tree. Use the skill to improve foraging skills or better reflexes when encountering predators or perhaps make better tools. Upgrade according to your playstyle. The game features many intuitive based gameplay which relies on sound and visual cues which is prevalent throughout the different scenarios in the game. The game also includes quick time events as a way to have gamers be more involved in the outcome of a certain event. 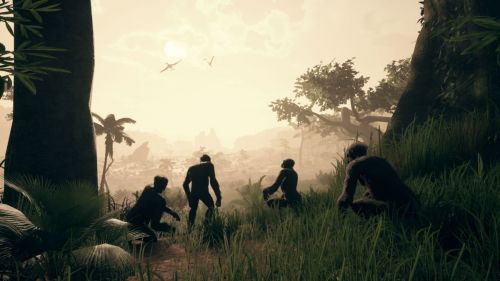 As to be expected of a game which is helmed by one of Assassin’s Creed original creators, the graphics are stunning. The environment of an ancient Earth is simulated perfectly as it looks like an authentic biosphere with ancient creatures that are in their nightmarish proportions (I’m looking at you, Crococaurus). The apes are animated as realistic as animation today can get, and the only downside of this is that you get attached to one of the apes as you feel a genuine connection to it as it expresses itself with great realism. And let’s not forget the music and sounds you’ll hear throughout your journey in this realm. Everything sounds like what it is supposed to be. The sound of apes interacting. The sound of a giant winged beast in the distance. Everything is to perfection. And in certain areas, the sound of nature just doing its own thing creates a sort of a calm ambiance which makes you forget that giant snake has you in its sight. The jungle environment is made so that your character can interact with it as much as it can. Trees and roots can be climbed. Fruits can be picked and object commonly found in the jungle can be picked. There’s not a bad thing you can find in this component of the game. Then again, the game is more about exploration than graphics anyway. Nevertheless, the game scores high points in graphics and sounds. 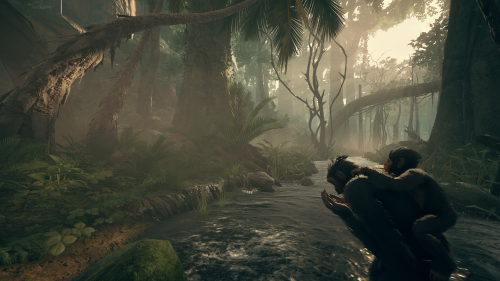 The game brings out revolutionary gameplay. I definitely felt something unique with this game and without hesitation threw in hours of gameplay. An experience-based game which lets you do anything you want to do without any help or guide. And the concept works well which you will find as you put in the first few hours into the game. But what you’ll notice after that is the grindy nature of the game where you do things with your first ape and will be replaced once you have an offspring. And then the cycle continues. Some might be okay with the grinding nature of the game, however, the problem I found was the grinding is too long before seeing any real visible progression. And you’ll be greeted with the same cutscenes over and over again when you’re mating or leveling up to a new species. The gameplay stays the same which can potentially start straining anyone’s patience. The action part of the game also lacks evolution as well. It’s the same dodge or stabs quick event action every time you encounter a predator, and it feels a bit worn out after a while. 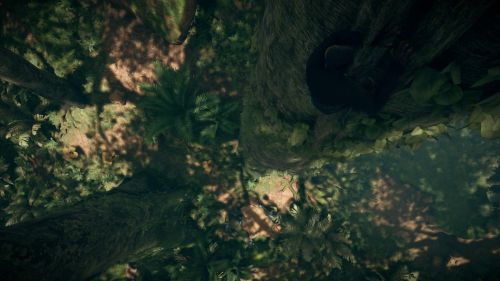 The game definitely features a new game idea which is executed properly. The playability of the game when it comes in the later stages is questionable, depending on the player’s patience and motivation to see it to the end. This game is definitely something to try and experience. Get yours today on Steam once your reload your Steam credits. It is definitely a new and interesting take on the survival genre. Beautiful environment, convincingly animated apes and interactive environments are the plus points of the game, and hopefully, future patches will be added to help to add another dimension and the replayability factor of the game.