The story behind Ubisoft’s latest release is well developed and can provide the extra motivation needed in the early stages, just to see how it unfolds. Particularly impressive is the way Anno 2070 succeeds in generating the impression that most of the events recreated in the narrative are real, or at least inspired by real life affairs. In fact everything is pure fiction, but thanks to a solid plot and well delivered cut scenes, players will easily be immersed into the atmosphere of the late 21st century.

The backbone of [easyazon-link asin=”B00657AVMO”]ANNO 2070[/easyazon-link] is the perpetual struggle to build a flourishing city starting from scrap, dealing with an increasingly high number of challenges dictated by progress itself. Careful planning prevents a late game collapse, but for beginners it’s almost impossible to get a clear image about how the city should look like in the latter stages. Frankly it takes double digit hours just to get a better glimpse of the big picture, which is not necessarily a bad thing, since Anno 2070 has huge replayability. 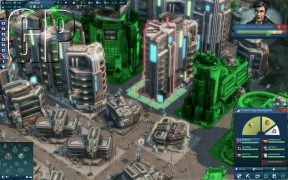 Building houses and satisfying the basic needs for their inhabitants may not sound like a gargantuan task, but finding the right pattern to erect those buildings will have a big impact on the long run. Since every building requires a rather large construction site, finding a way to construct all structures on the relatively small landmass can be fairly difficult. In this not so distant future, humanity is on the brink, following an ecological distaster so resources are scarce and addressing the needs of the population is a heavy burden.

There are two main factions that you can choose from and with their agenda being divergent, you need to weight the benefits and shortcomings. Ecos have learned the lessons of the past and are trying to build a sustainable city even though the growth is much slower than what the opposing faction has to offer. I am talking about the Tycoons who care little about the impact their methods have on the environment and are very result oriented. Last but not least, the Tech faction will support your efforts and in more than a few occasions, you will be forced to play with all factions at the same time.

A game for the dedicated few

In the absence of a comprehensive manual and a multiplayer mode, the campaign serves both as a tutorial and some sort of end-game experience, with all the possible challenges available at some point. Still those dedicated fans who manage to cruise through the lengthy campaign set and are still starving for more, can put their skills to test again in the “ Continuous Play” mode, highly customizable and virtually boundless. Just like the name suggests, you’ll build a city on a predefined map, and expand it without restrictions for as long as you want. For most of us this endeavor will eventually end in bankruptcy, but the elite players will expand their city to such a degree that it really runs by itself.

[easyazon-link asin=”B00657AVMO”]ANNO 2070[/easyazon-link] has both the looks and the stirring gameplay to grow into a hit and set a new milestone in the franchise developed by Ubisoft. Unfortunately the lack of an appropriate tutorial combined with the sheer complexity of the game mechanics, can have a deterring effect on the newcomers. The bottom line is that, Anno 2070 is not a game for the masses but it has enough depth to make it an extraordinary experience for anyone willing to try it and discover its hidden quality.

Take a look at how tomorrow’s world is being built: