This was the perfect gadget/toy to review with my two boys who are 12 and 9 years old and my youngest son already owned a MiP and had been wanting a MiPosaur for a while.  MiP are toy robots that you can control with an app on your Smartphone and are somewhat interactive to play games with though they aren’t programmable so fall more under the toy than project category.  The MiPosaur is perfectly suited for kids who are fans of all things Dinosaur related specifically if they play Ark: Survival Evolved like my kids do and my son was having a ton of fun with the MiPosaur in the week we have been reviewing it.

The only thing about the MiPosaur from the initial unboxing and setup is that you need 4 AA batteries for the MiPosaur itself and another 4 AAA batteries for the Trackball, so if you are buying batteries you can really spend some cash on batteries and it is highly recommended you use rechargeables.  I wish you can simply plug them in and charge them via USB cables with solid or larger battery packs but that would be the only thing I would mention is a bit inconvenient. 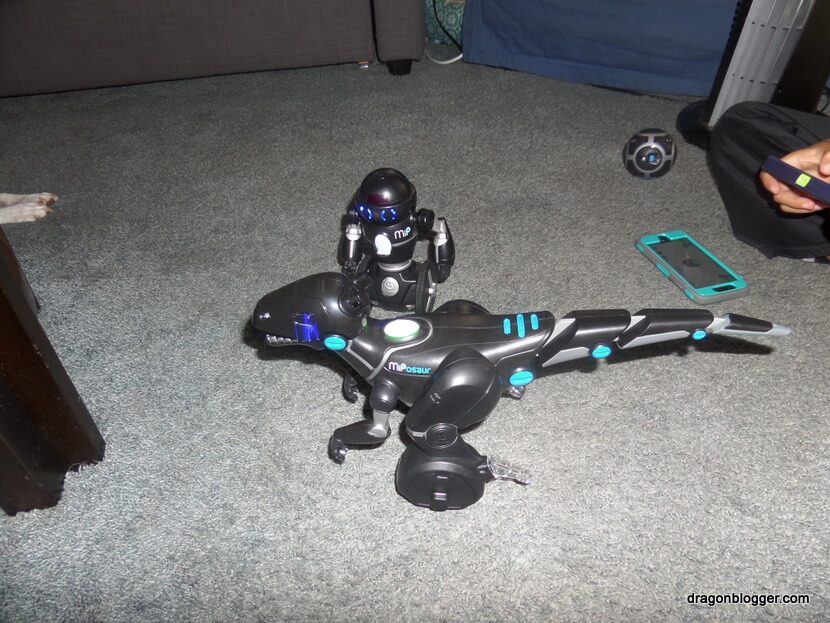 Overall my son hasn’t had this much fun with a toy in a while, and the Trackball is something that the regular MiP robot doesn’t have.  Without the MiP app for iPhone or Android the Trackball acts like a control system for your MiPosaur and you can use it to have the MiPosaur follow and fetch the ball anywhere you roll it, or play other games with the MiPosaur.  The MiPosaur is smart and will avoid obstacles and if it bumps into something will work around it and we watch it navigate around the dogs and chairs in the house. 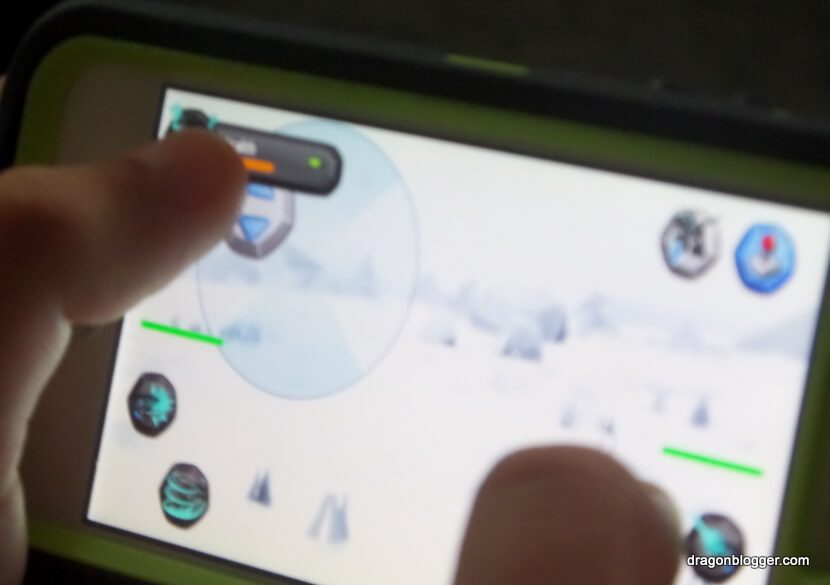 With the MiP app on iPhone you have direct control over the MiPosaur and you even have the ability to make the MiPosaur or MiP go into combat mode against another MiP device.  While both shoot lasers, the MiPosaur has a tail attack that allows it to strike it’s opponents. 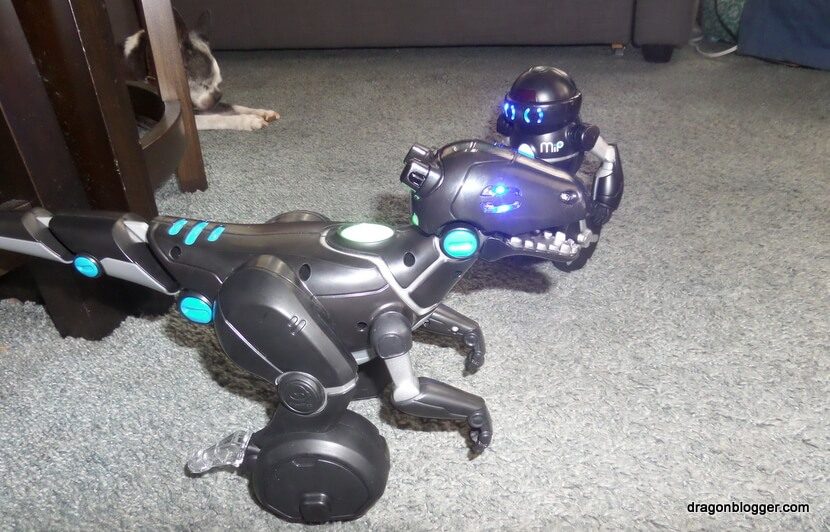 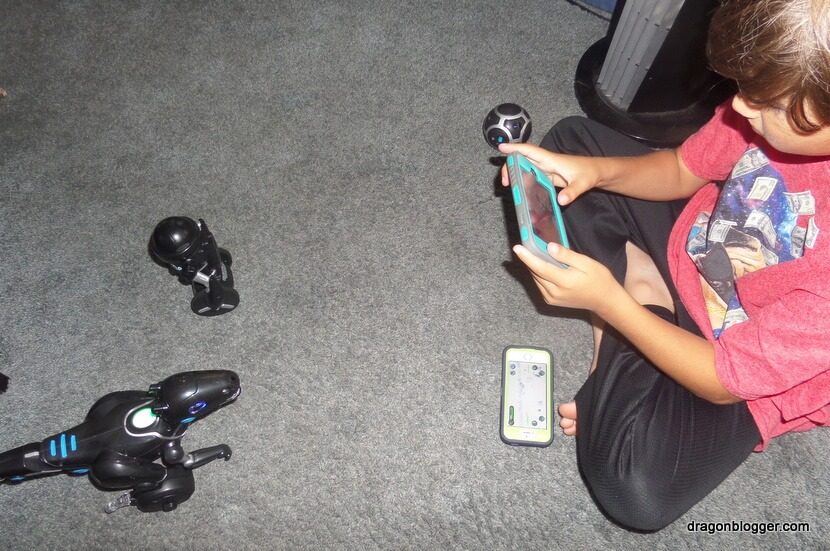 My son and I took turns installing the MiP apps on the phones and used 1 phone to control the MiP while the other phone controlled MiPosaur.  They took turns shooting lasers at each other and attacking each other.  The MiPosaur has an LED indicator light on it’s back which is green but turns yellow when he is injured and red when he is disabled and loses a combat.  The app actually shows a hitpoint bar and tracks the health of the robots while they battle it out.  MiPosaur just tilts back on his static rear claws and gets disabled for a moment, the MiP will actually fall over when he is disabled.

The MiPosaur is much more powerful in combat against MiP and has more health and does more damage, the MiP Robot can fire shots faster and is more mobile so with a lot of space it is a pretty fun game that gives the MiP some ability to roll around and try to out maneuver the MiPosaur.  Either way my kids had fun playing in about 15-20 minute stretches several times a day over several days as the MiPosaur dominated the MiP and they had to take turn who wanted to be the more powerful robot. 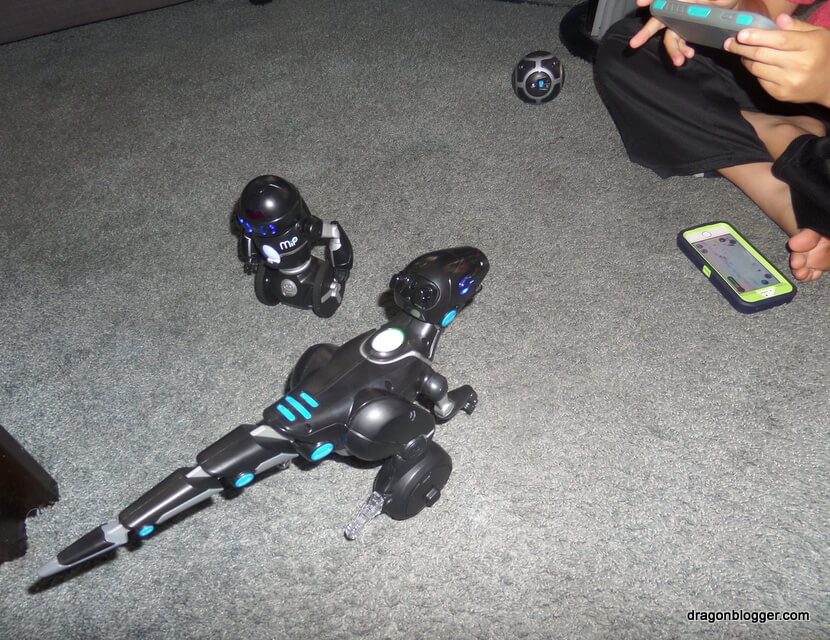 The Trackball games make it fun for your MiPosaur to play with around your home and he rolls around equally well over carpet or hard floors, unlike the MiP he doesn’t ever fall over and need to get back up so if he does happen to fall over (forward only) you will have to manually tilt MiPosaur back up, it isn’t able to prop itself back up with its arm’s which are fixed plastic arms that can’t be moved at all. 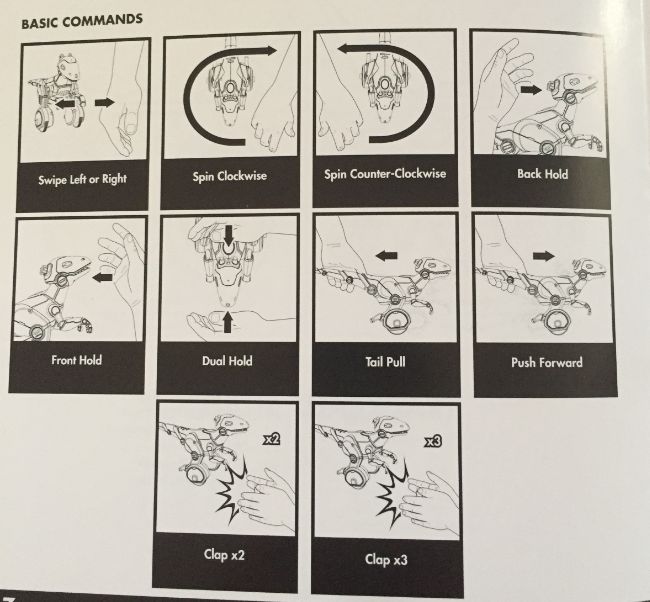 The MiPosaur has moods and can be set to Curious Mood which is its default, Excited Mood, or Annoyed Mood and each mode causes the MiPosaur to react differently to various commands that you give it.  The MiPosaur will bark, sing, roar, make grumpy noises and is more interactive to play with than you think.  The trackball can set to one of 6 modes.

This mode will cause the MiPosaur to dance, shake the ball and music will play.  Shake the trackball to stop the dancing.

You use this to simulate feeding the MiPosaur and he will make eating sounds when feeding him and generally act like a pet hungry for treats.

The MiPosaur will attempt to be near the Trackball at all times and stays close to it guarding it, it becomes an object of it’s affection.

This was the mode that my kids found most entertaining besides combat, the MiPosaur will follow the Trackball wherever you roll it and will keep hitting it and rolling it around pushing it around the house or room until you make it stop playing.

MiPosaur will start to beat box when it gets close to the Trackball, this is kind of a weird mode hearing MiPosaur belting out beat box.

These are the gestures the MiPosaur generally responds to and they cause different reactions based on what mood your MiPosaur is set to.