So it took me a while to do this review because I knew it would require cleaning up my desk and completely redoing most of the top of my desk, but once done you will see how much extra desk room I managed to get from using the Arctic Z2 Pro Dual Monitor Arm to hold my monitors above my desk instead of using the default monitor stands and in one case an extra stand to raise a monitor higher.

First let me introduce you to the cluttered mess that was my desk with dual 24″ monitors side by side on their original stands. 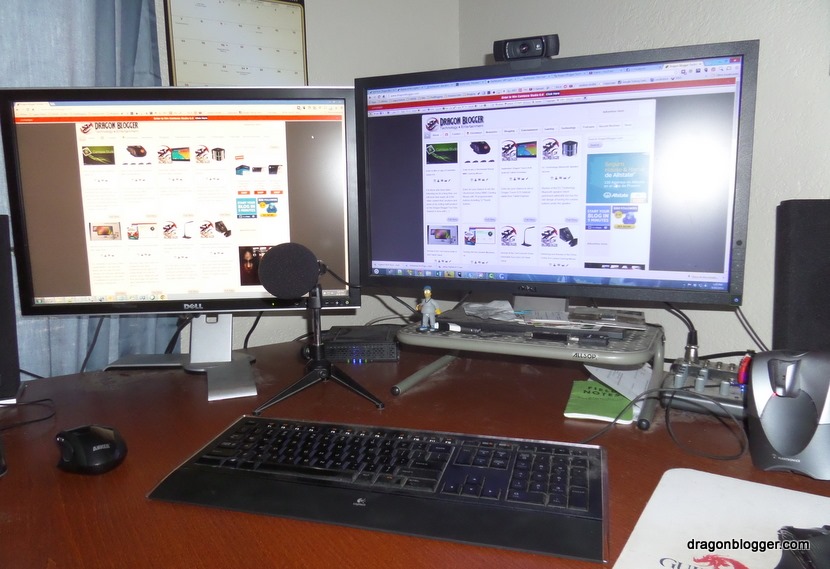 Then you can see the unboxing video as I take out the Arctic Z2 Pro from the box, which is quite heavy and solid.

Now, before I go into the review I want to point out some things, the first is that I don’t have 2 identical monitors which is highly recommended if you are using any monitor mount to hold monitors side by side.  Even if you are using the same size as in my case 24″ monitors, because they aren’t the same models they have different heights and widgets and depths which make them slightly awkward being side by side.  So note, that my final result would be so much better even had I had 2 identical 24″ monitors.

The first thing I noticed going into my installation of the Arctic Z2 Pro with my monitors is that not all VESA compliant monitors are equal and both monitors had problems with the mounting heads right off the bat.  The heads were just a little too big for the square VESA mounting inset on the Dell monitors which made me a little worried at first. 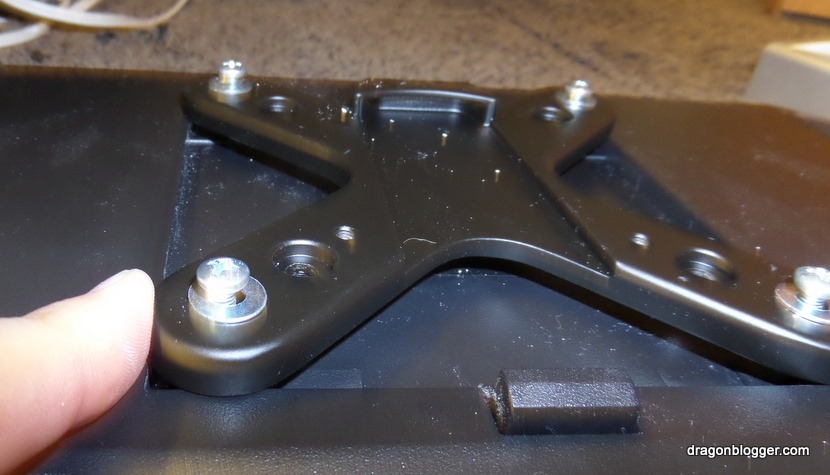 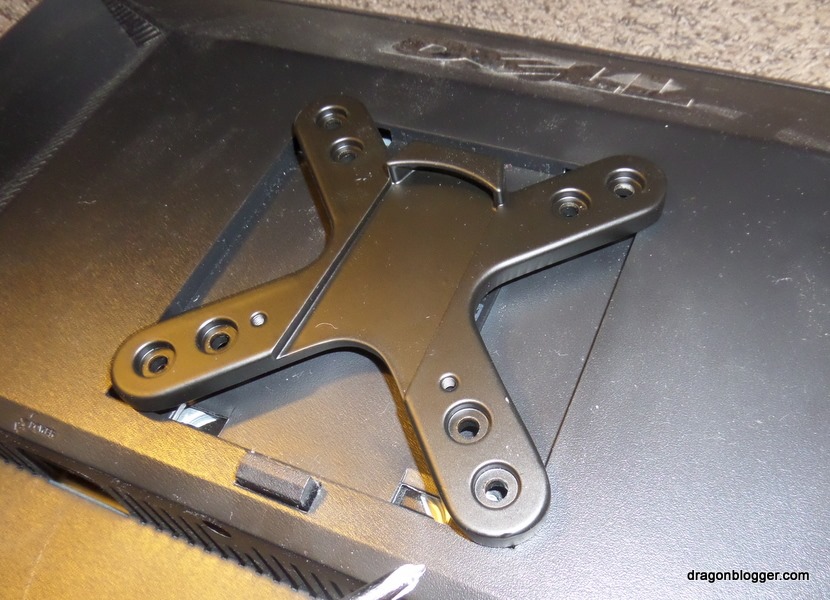 But, Arctic has you covered, they provide a few different types of spacers to help compensate if you run into this problem, I wound up having to use the largest spacers the provided and they worked like a charm raising the mount so it was well above the square VESA inset.  You can see with the spacers the mounting brackets for the Arctic Z2 Pro worked perfectly. 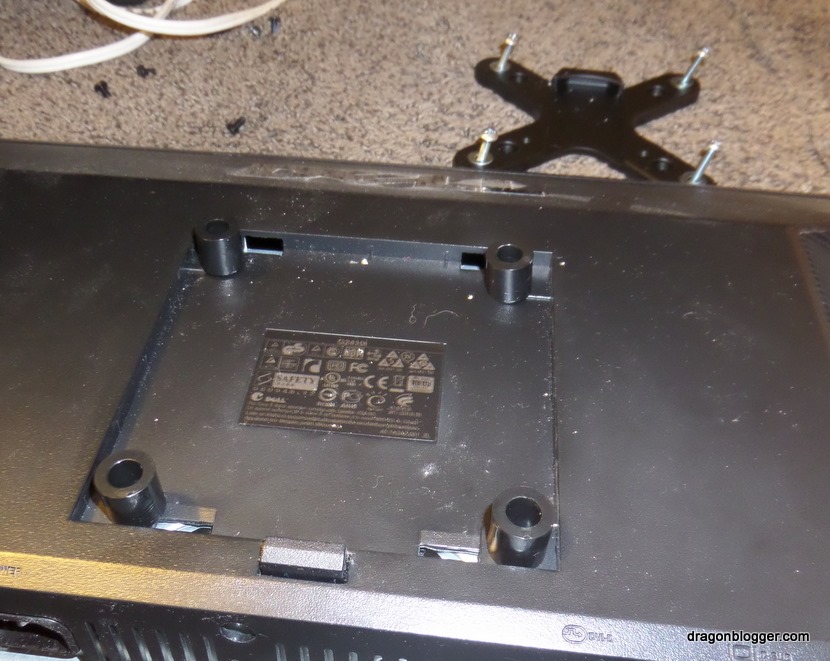 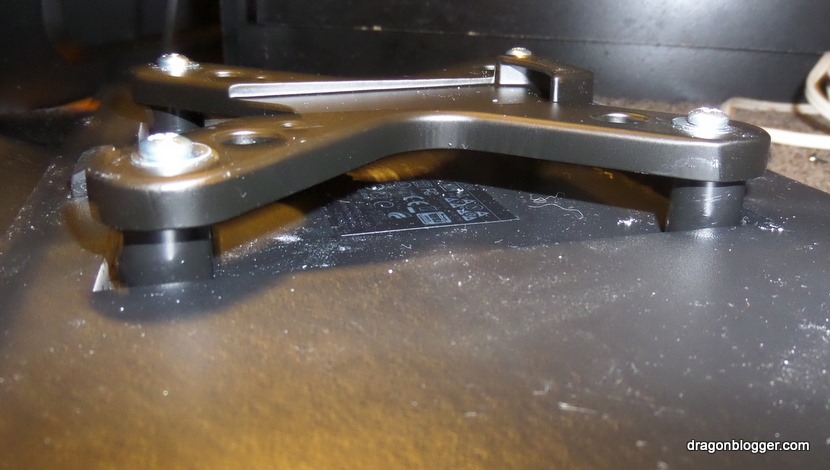 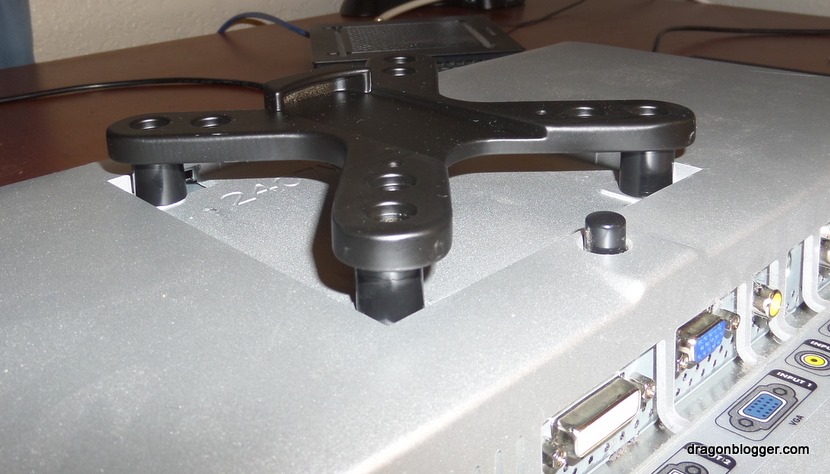 After you install the mounting brackets on the back of the monitors, you then attach the monitor to the arms and the main pole which you should have already attached to your desk.  The only thing of interest to note here is you will need to use the Allen wrench to tighten quite a bit, by default the head where the ball allows you to rotate and tilt the monitor was too lose and the monitor would just keep slipping and pointing down.  Tightening was a cinch and solved the problem immediately though if you have your monitors and bracket behind your desk while it is against a wall you could put yourself in some awkward positions to try and reach the heads to tighten them, which I had to stand on my desk to do, so it is better to tighten them up a bit ahead of time rather than after you put the monitor on like I did. 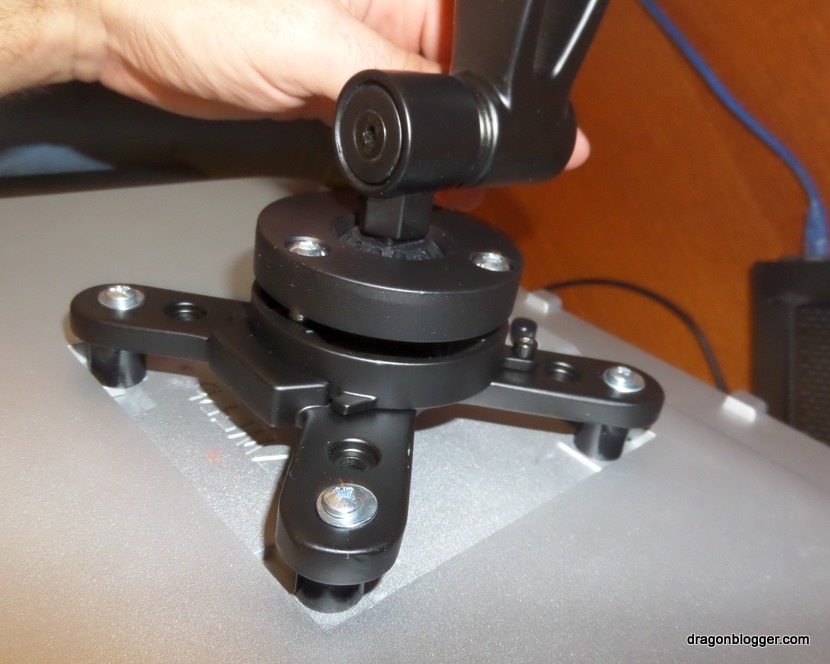 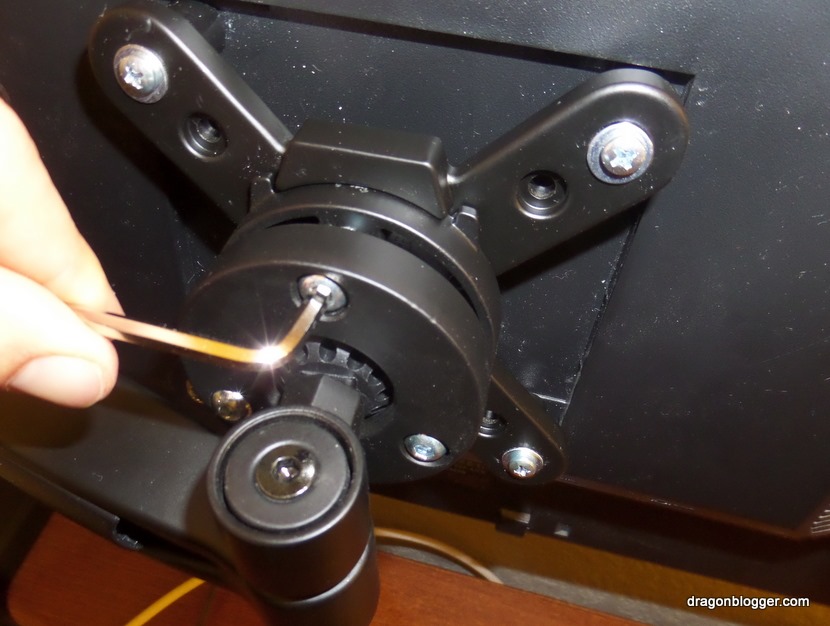 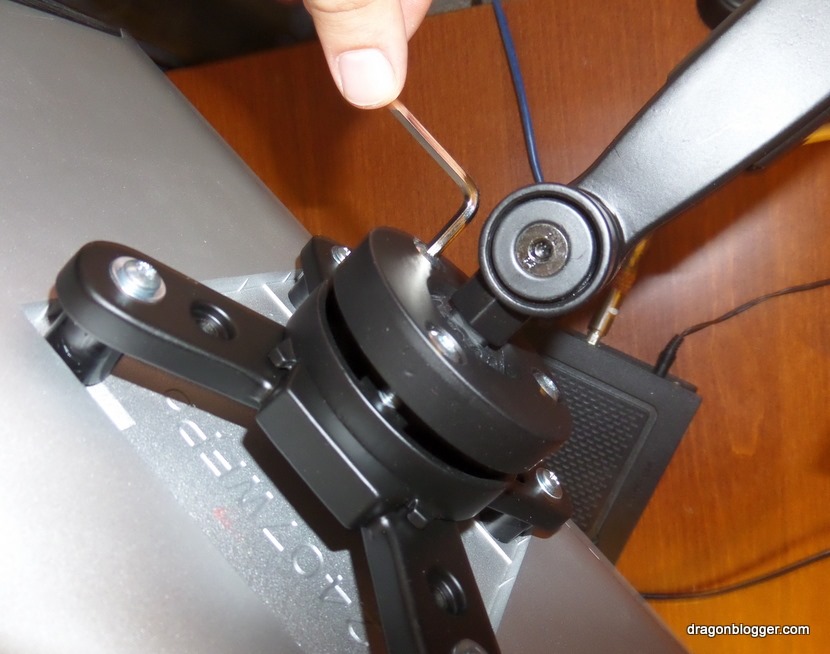 I got one monitor on and I realized early on that I was going to have a bit of trouble with the Arctic Z2 Pro with my desk configuration. 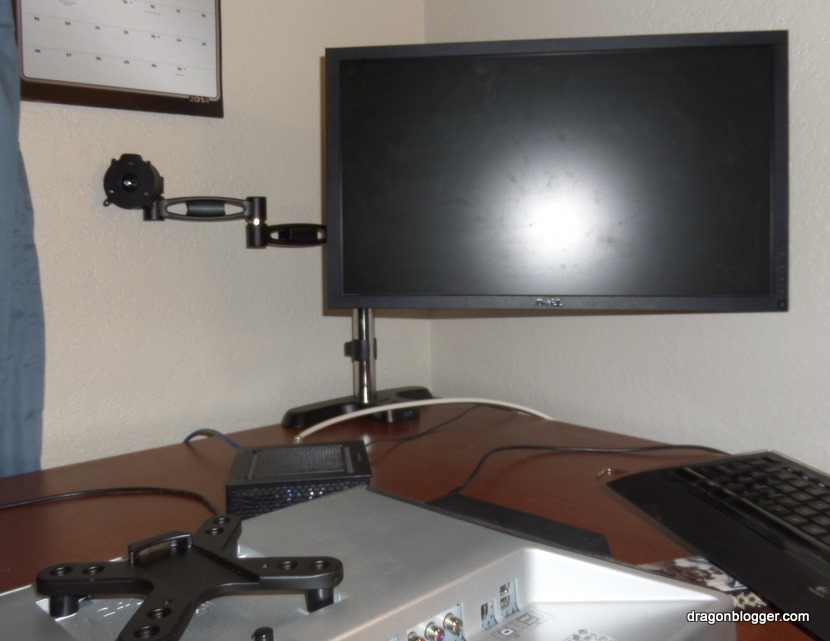 See I have a corner desk, it has a very large surface area but it is essentially like a square going flush with the corner of the room, the Arctic Z2 Pro is designed to be for a rectangle desk or any desk that isn’t directly in the corner of the room if you have 2 monitors, because though it has fantastic angles and tilts, the arm length is just a little too short for me to get the perfect angles to accommodate the corner of my wall and desk. 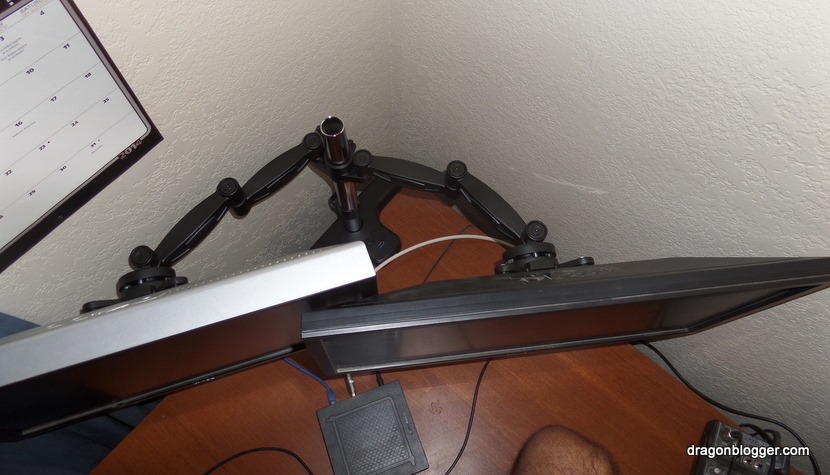 So you can see I ran into an overlap issue with the 2 monitors not quite having enough room to distance themselves to be side by side, because my  corner desk was right up against the wall which left too little room for the monitors to stretch out without crushing against the wall and window.  I did some slight desk adjustment and turned the monitors completely  vertical (LOVE how you can rotate the monitors a full 90 degrees in either direction.  And after some struggling, I did manage to get them side by side as best as I could so that they were virtually neck and neck.

Note, I have 2 completely different monitor models, the Dell 2405FPW and Dell 2407WFP so they are not the same size or same thickness and this is the best they will look together.  They  aren’t for the same computer, one is for my  work laptop the other is for my home computer, so I don’t split the same computer screen across 2 monitors.  This would look so much better if you had 2 identical monitor models I assure you. 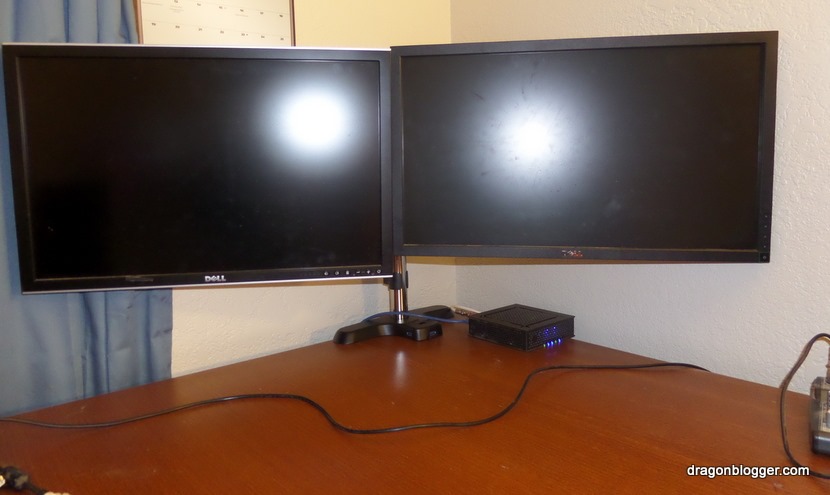 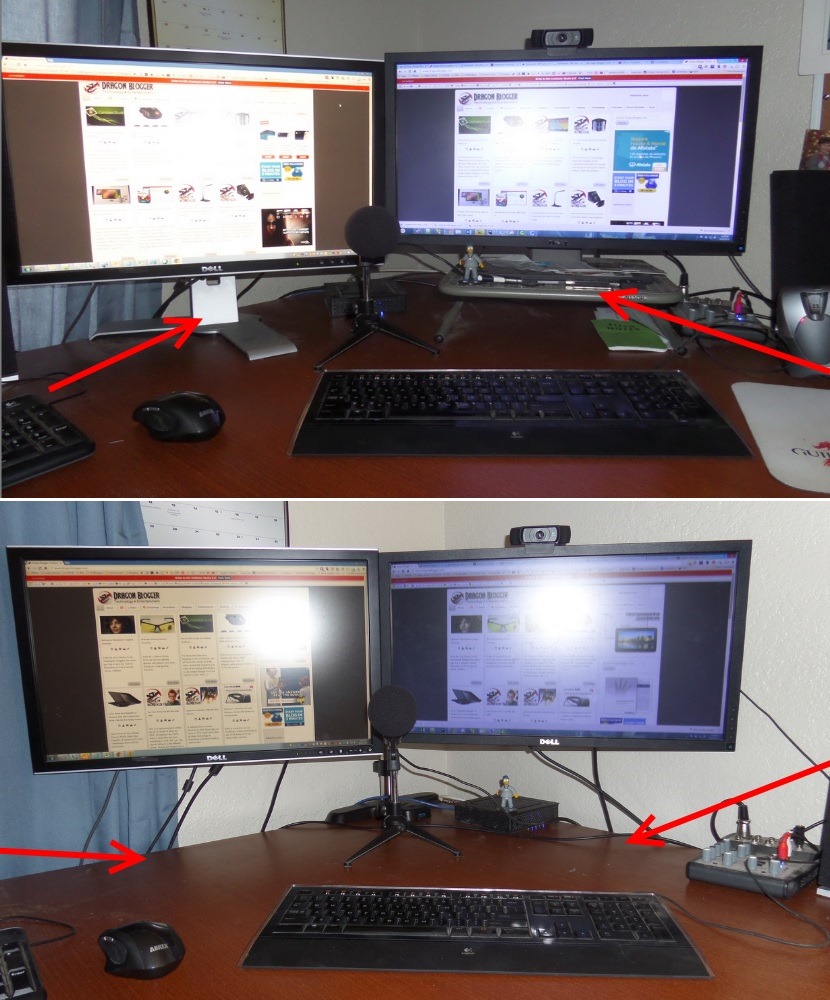 I actually  did free up a lot of room and the monitors were positioned well, these would be even better if I had a rectangle desk that wasn’t in a corner, which I will be working out of next year when I move.

Now, the Arctic Z2 Monitor Arm doesn’t just hold your monitors, it also includes a 4 port USB 3.0 hub as part of the base of the arm mount. This gives you easy access to 4 more USB ports which is of great benefit putting them right front and center on your desk so you don’t have to reach over to your computer case, or have your limits if using a laptop with only 2 or 3 USB ports. 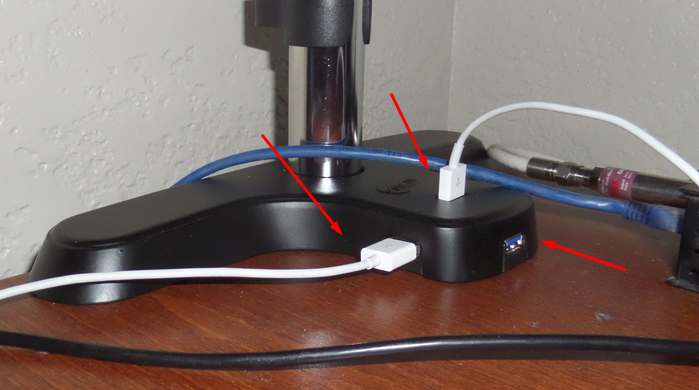 Now the Arctic Z2 Pro Monitor Arm is powered and needs to be for the USB 3.0 hub to work, but oddly  enough it isn’t capable of delivering 2.1A power output to charge tablets, it can charge a 1A device like a smartphone, external battery…etc.  But if you plug an iPad or Android tablet into the Arctic Z2 Pro you will get a “not charging” as the USB hub will bridge a connection to the PC but cannot charge 2.1A devices like a full USB 3.0 port on the computer can.

Still I use it mostly for plugging in my camera to dump pics, keeping my USB mic plugged in or doing quick transfers.  USB file transfers from a USB Drive were on par with using the direct USB 2 or USB 3 ports and I saw no speed transfer difference overall the Arctic Z2 Pro is highly recommended to anyone who has a need for a dual monitor arm mount.