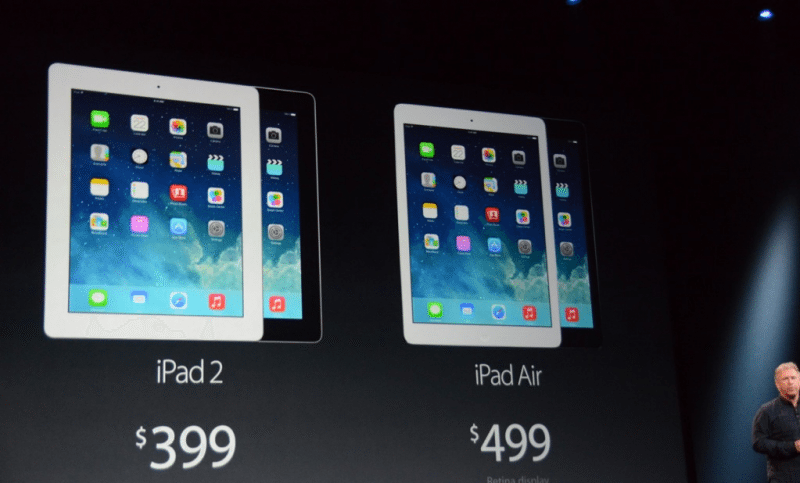 On October 22, Apple announced some changes to their iPad product line. The new changes include a new product called iPad Air, an updated model of the iPad Mini, and lowering the price of the iPad 2 to $399. Of course, none of this should be a surprise because we already knew what was coming, for the most part.

After examining the situation, it doesn’t seem like Apple made a smart move with the new iPad pricing. It looks as if Apple believes they are still the only company with a competitive product in the tablet market, but we all know that just isn’t true. I think the engineering in the new iPad Air is phenomenal, but they can’t win customers with engineering achievements alone. They will probably lose more tablet market share to Google and Amazon this year simply because the iPads are so expensive.

The new iPad Air costs $499, which is what they have been charging for the full-sized iPads since the original in 2010. This is understandable because it is their full-sized flagship tablet. People have been paying $499 for iPads for three years now, so there should be no reason to alter this price. Consumers also have to remember that a portion of profits Apple brings in from their products goes towards research and development, which supplies funding to the engineers that work on making each generation of iDevices thinner, implementing new features such as the fingerprint scanner on the iPhone 5S, and developing software like Siri.

The updated iPad Mini, on the other hand, is overpriced. At $399, it is $170 more expensive than the Google Nexus 7 and Amazon Kindle Fire HDX that are both priced at $229. A lot of children want iPads as Christmas gifts, but in this economy, I don’t know too many middle-class parents that can afford a $399 tablet for each of their kids. Even if they only have two children and buy each one a tablet, they would be saving $340 by purchasing a Kindle or Nexus instead of the new iPad Mini.

In addition to being expensive, keeping the iPad 2 is just a bad idea. First of all, the iPad 2 isn’t even the second-newest model. They released a third-generation iPad in 2012, but they have decided to keep the iPad 2, the model introduced in 2011, instead (most likely to keep production costs down). Not only that, but this large iPad is the same price as the iPad Mini! Customers that don’t realize the difference between the two will end up purchasing the iPad 2’s old hardware simply because the screen is bigger.

Overall, I think the pricing structure for Apple’s new iPads could use a bit of work. The engineering is there, iOS 7 is wonderful, and Apple definitely has the best app ecosystem in the tablet market, but consumers make the final decision based on how it will affect their wallet. Amazon makes zero profits from Kindle hardware sales, but they still make money because they have a closed ecosystem that requires all Kindle owners to purchase movies, books, and other media only from Amazon. Apple’s ecosystem isn’t as restrictive as Amazon’s, but they could still make money selling iPads at-cost and relying on iTunes, iBooks, and App Store sales for income. It’s a gamble for sure, but Amazon and Google are stealing more and more potential iPad customers every day. It’s not because iPads lack technical innovation – it’s simply because they can get a similar product elsewhere for less money.