Walnut Creek, Calif. (July 23, 2020) – Indie publisher Modus Games and developer eXiin today share a new features trailer alongside the news that Ary and the Secret of Seasons, the captivating action-adventure following a young girl and her awakened ability to shift the seasons around her, will launch September 1 on Nintendo Switch, PlayStation 4, Xbox One and PC.

Today’s announcement joins Ary via a new trailer as she dashes, climbs, and dives through the gorgeous world of Valdi, a lush but troubled land that’s lost its once perfect balance of eternally consistent climates. Players will use the powers of the seasons throughout their grand adventure to alter their surroundings; throwing the winter sphere, for example, will create icy stalagmites to reach new areas. Using spring’s sphere can cause vines to grow in order to traverse up once-insurmountable cliffs, and refreshing summer pools allow Ary to swim across yawning chasms. Get a glimpse of Ary’s incredible potential by viewing the video here:

Ary and the Secret of Seasons finds Ary faced with a monumental challenge as she strives to aid Valdi’s Guardians of Seasons, setting out on a journey no other inhabitant of Valdi can complete. Her compelling story of defying expectations will lead her through a strikingly beautiful world as she grapples with puzzles, meets curious people, and leverages her powerful abilities for an upper hand in fluid, satisfying combat.

For the latest on Ary and the Secret of Seasons, check out https://ary-game.com/. To stay current on all of Modus Games’ exciting upcoming releases, check out https://modusgames.com/, join the Discord channel (modus.games/discord), and follow @Modus_Games on Twitter and Facebook.

Ary and the Secret of Seasons is an award-winning adventure game following a young girl named Aryelle, or Ary, as she journeys across the great world of Valdi. By becoming the Guardian of Winter, Ary gains the ability to manipulate the seasons around her. Ary will learn to control the seasons and use them to defeat enemies, overcome obstacles, and solve complex puzzles on her adventure across Valdi.

Long ago, the world of Valdi was threatened by an evil mage. After a great struggle, he was defeated by the Legendary Warrior and sealed inside the Vault, imprisoned for all eternity. To ensure the mage’s imprisonment, four great sages swore to keep watch and protect the Vault. They formed the original Guardians of Seasons, a secretive organization now steeped in history and legend.
After a mysterious force throws the seasons of Valdi into disarray, Ary decides to assist the Guardians of Seasons and sets out to find the source of the mayhem. Using her wits and courage, Ary will have to overcome monstrous enemies, secret plots, and stuffy traditions to save Valdi and bring balance to the world once more. 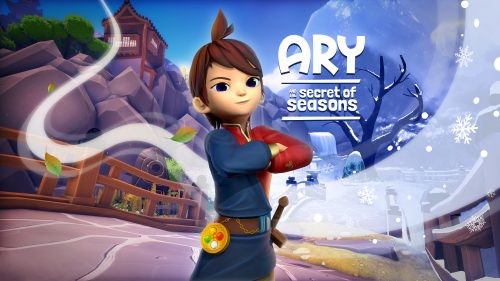 Ary and the Secret of Seasons Game Features

Modus Games is one of the fastest-growing video game publishers in the world. The label prides itself on providing AAA publishing services to talented independent developers across the globe. Modus Studios Brazil is a full-service development studio supporting creators of inspired interactive entertainment. For more information, visit www.modusgames.com.

About eXiin and Fishing Cactus

eXiin is a fast-growing indie game company based in Brussels, Belgium. Since June 2016, eXiin is developing their new IP called Ary; the first game is “The Secret of Seasons.” To increase the scope of Ary and the Secret of Seasons, eXiin joined forces with one of the most experienced Belgian based game developer: Fishing Cactus.

Fishing Cactus has been developing games for almost a decade and share with eXiin a certain taste for innovation. Fishing Cactus counts over 50 released titles and a crew of 22 developers. Fishing Cactus is behind the successful atypical typing RPG Epistory: Typing Chronicles and handcrafts smart games with soul.