Every once in a while we get a gadget related toy here to review and my kids get super excited because it is usually something they can enjoy as much as me when we do the review.  In this case it was the Babrit F1 High Speed RC Boat Remote Control Electric Boat and we did put the boat through it’s paces for sure at the beach which is only a 5 minute walk from my house here.  Before I talk about how it performed in the ocean let me talk about the product itself. 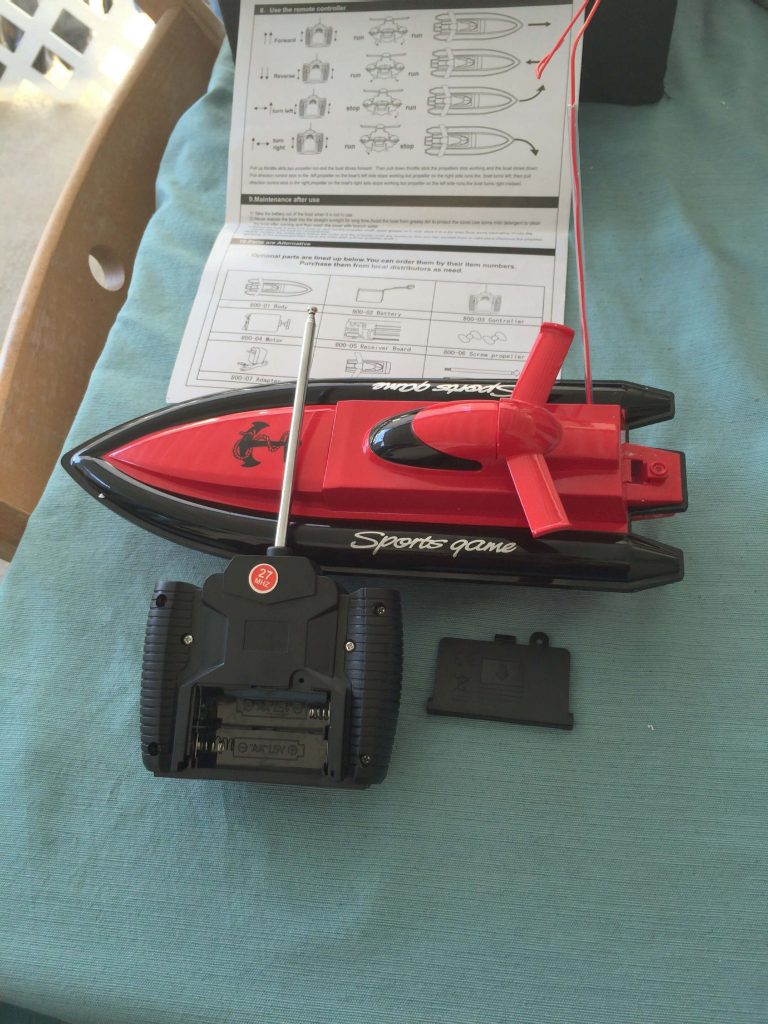 What you get with the Babrit F1 High Speed RC Boat Remote Control Electric Boat is a controller which has two levers that both slide up or down only, each one controls one of the two propellers on the Babrit F1 Red Racing boat.  The controller requires 2 Double A Batteries (not included) but the racing boat itself comes with a battery pack that just looks like a customized quad AA battery merged into 1 pack.  You charge it and you are ready to go. 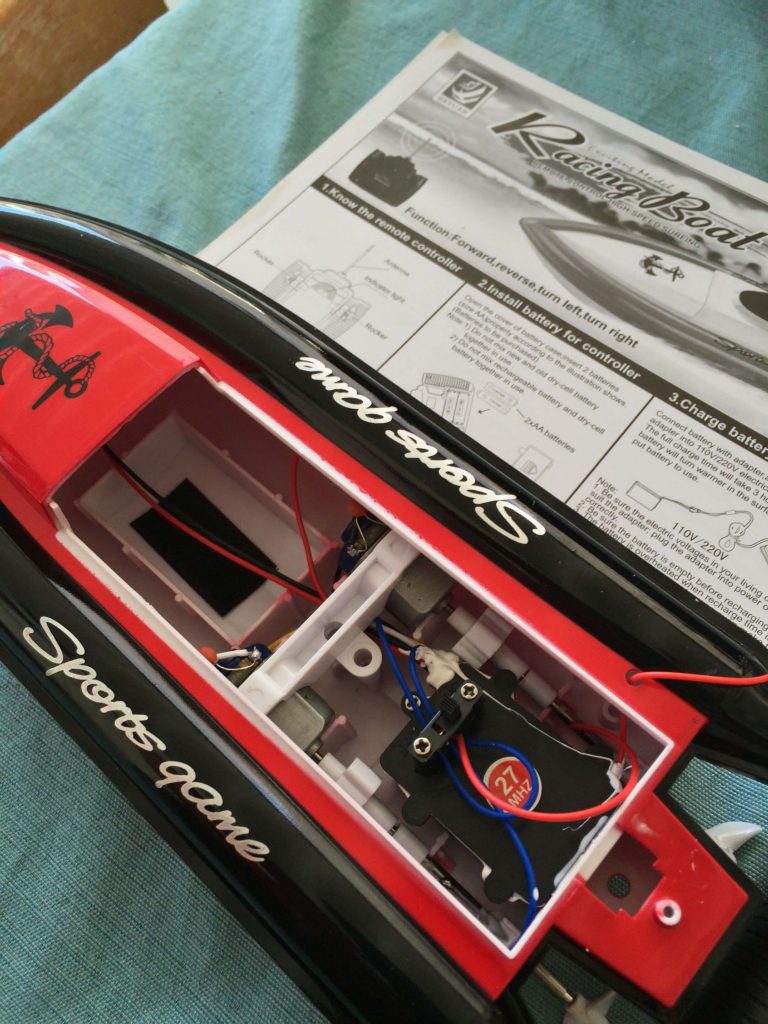 You assemble the antenna by sliding it in the hole on the right back of the boat which takes a minute and it just sites right in.  The wiring is all very much exposed and unkempt inside the boat when you open it, this combined with how light the boat feels gave me concerns over it’s durability.  When the battery sits in the boat it doesn’t lock into place it just rests in a slot, which caused me some concern over what would happen when this thing hits some rough waves too. 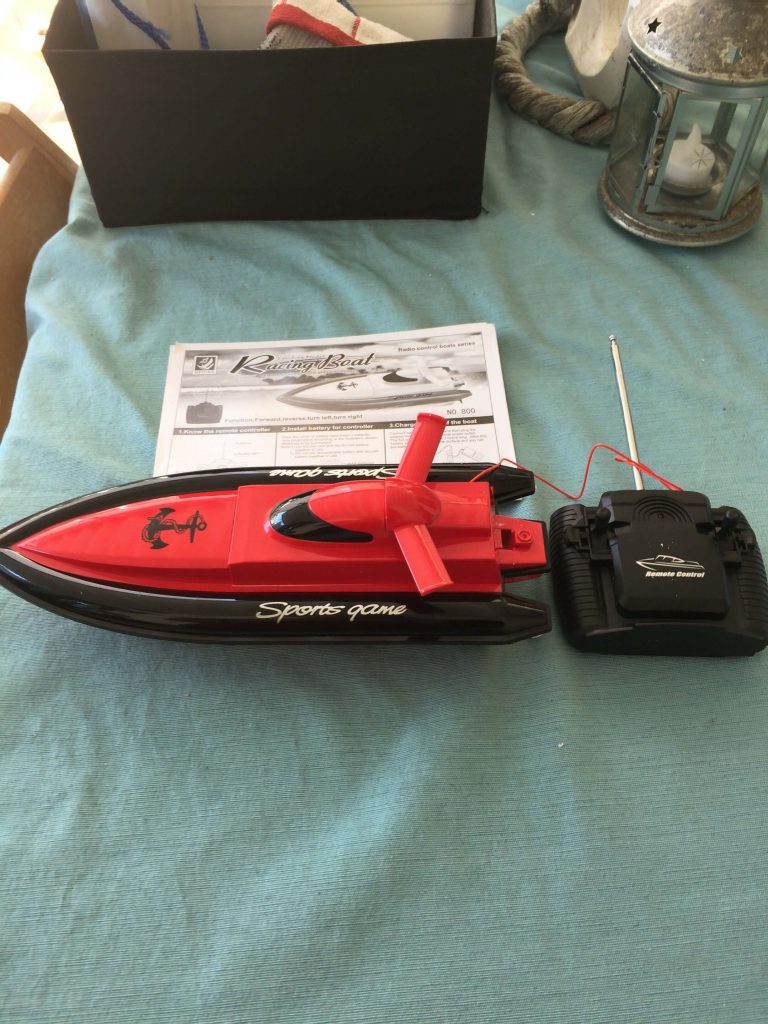 So we took the boat to the beach and here is where I ran into problems and disappointment.

The Amazon page for the Babrit F1 Racing Boat claims that it has:

Yet, if you watch the video below this thing really doesn’t appear to go that fast, it may hit 7 or 8mph but in rough water it just really doesn’t go that fast at all and it was easily overwhelmed with waves, it didn’t have the speed or power to go through waves, it was simply demolished and turned over by waves, which lead to the battery flipping around inside it, water getting into the cabin and eventual degradation of the boat.

It also mentioned 30-50M range from the controller and I found the boat would barely up to 10-15 meters from the controller before it was getting inconsistent signal and the propellers would spin on and off rapidly like it couldn’t get a solid and steady signal.  So in my testing this could be caused by the waves/salt water or other interference but the signal from the controller was not even close to the 50M range it mentions as max, I would say at best 20-30M was what I could say was reliable.

Here is the video of playing with the boat, you can watch as it struggles with the ocean waves and it is fun to use for a while.

Unfortunately, this boat does not appear to be designed for the ocean and seems like it would be more for lakes or calm water beds like a pool.  It struggled against the waves, toppled easily and worse because it isn’t water tight seawater got inside the boat which started degrading it.  By the end of 20 minutes of playing with it, one of the propellers was inconsistently powering on and off  even with controller close and the boat just didn’t hold up well after being capsized a few times in the ocean waves.

It was fun while it lasted, but the High Speed just wasn’t apparent nor was the boat durable enough for playing in the Ocean with, given the fact they show a picture on the product page like this: 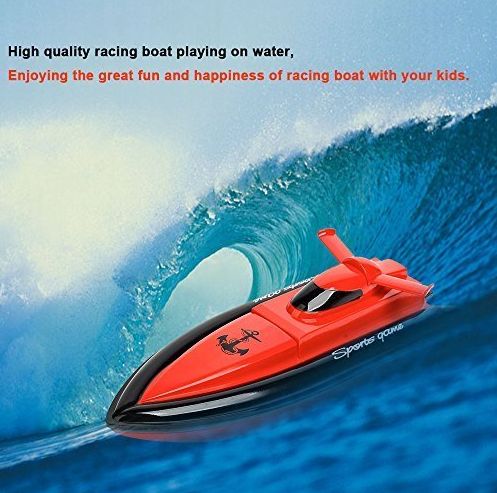 You really would have expected more from the Babrit F1 RC Racing boat, overall it was a 2.5 star product due to it just not living up to the claims that were presented in speed, distance and how well it performed in the Ocean.  Now that being said if you look around at pricing of RC Boats they vary in price but even ones twice as much don’t say they are save for turbulent ocean waves and say Lake/Pool…etc.  So perhaps they should just simply update the information of the product to say it is primarily for lakes/pools and still water, not for rough ocean water and then I could see it maybe being 3.5 stars.  But the picture clearly seems to indicate you could run it through the ocean waves and it doesn’t last long doing that. 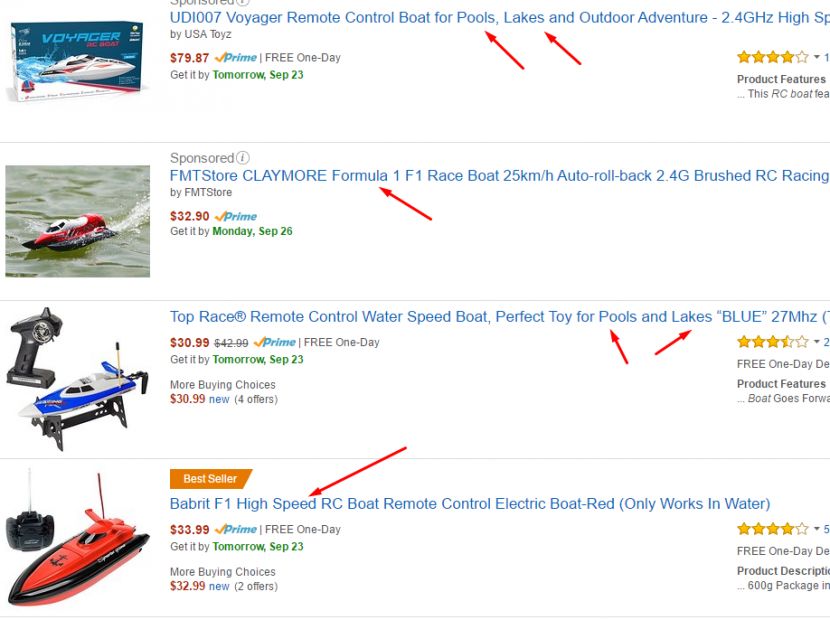 Disclaimer: Babrit provided me with the F1 RC Racing Boat so I could do a showcase and share thoughts on the product. All opinions are 100% mine and mine alone. For more information visit http://bit.ly/dbdisclose