Good day folks, how are you today? As for me, I’m doing alright, I suppose. Anyway, I’m just taking a quick moment to stop by and throw out my review of the graphic novel “Batman: Cacophany”. 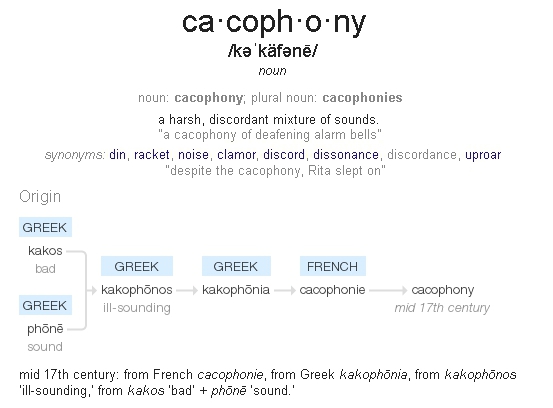 Yes, I’m aware it’s been out for a few years, but no I hadn’t read it until recently. I must say, the idea of Kevin Smith and Walt Flanagan (many may know him more from the TV show “Comic Book Men”, where Walt is the manager at Jay and Silent Bob’s Secret Stash – the comic book store that Kevin co-owns with Jason Mewes) collaborating on a project together seemed rather enticing. As such, I had to read it, I just had to. Admittedly, this was my first time reading any of Kevin’s comics or graphic novels (Cacophany was originally printed in standard trade form, in a 3-piece run), but I’ve seen pretty well every movie he’s been in and/or produced, so I thought I had an idea what to expect. A lesson learned: never make such an assumption. Anyway, I now present to you my brief review of the graphic novel, “Batman: Cacophany”… 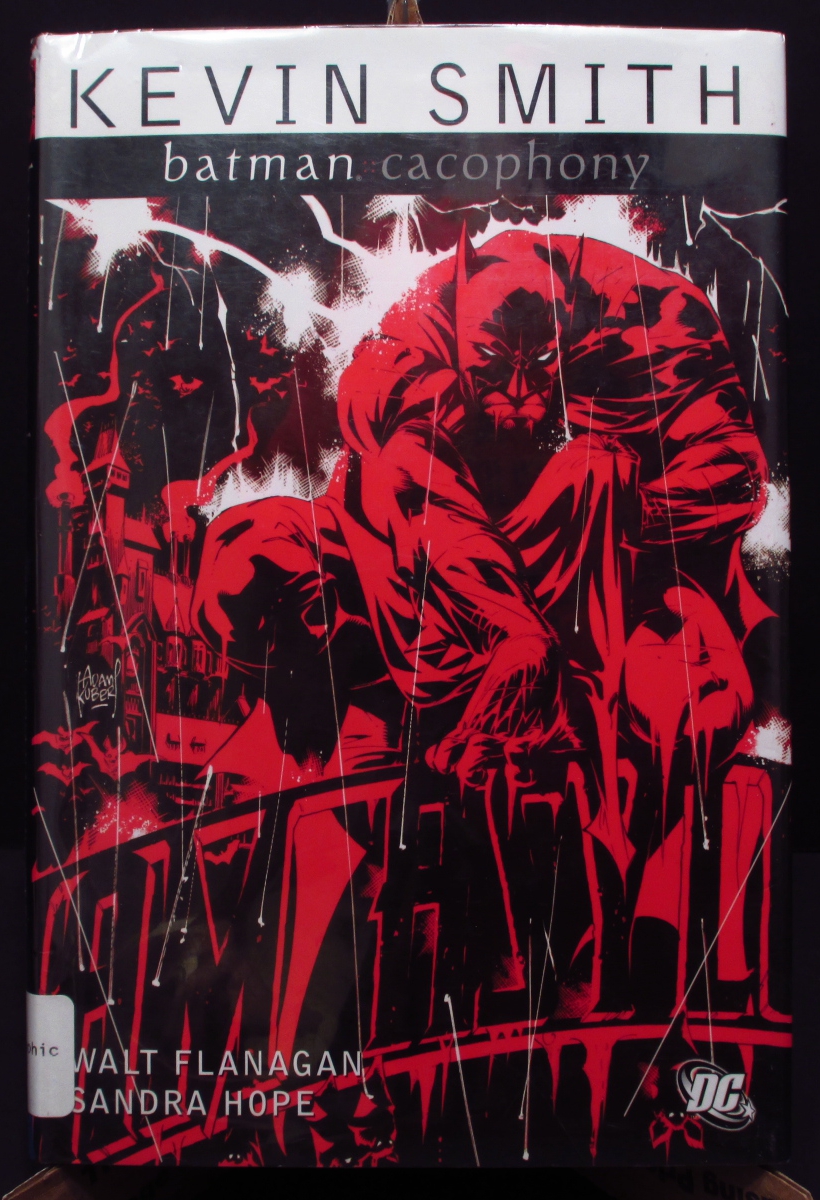 From the beginning, it’s pretty clear that the book is about Batman, that’s a given. What’s not clear, however, is what the story is really going to be about. The first thing to note is the cover, which was done by none other than Adam Kubert. It’s dark, gritty, purely Batman-esque in essence. In the background is Arkham Asylum, it’s night time, lots of bats around everywhere, and Batman is… well, Batman’s in some rather wildly awkward pose, crouching atop the Arkham Asylum gate. He looks angry, has his cape clenched in his left fist and staring at you as though it was you who made him get into such a ridiculous pose and out in the cold, wet night to boot. Hey Brucie, don’t look at me, I didn’t do it! I honestly prefer the variant cover much more-so, which was done by Bill Sienkiewicz (he also did the rest of the variants for this set). 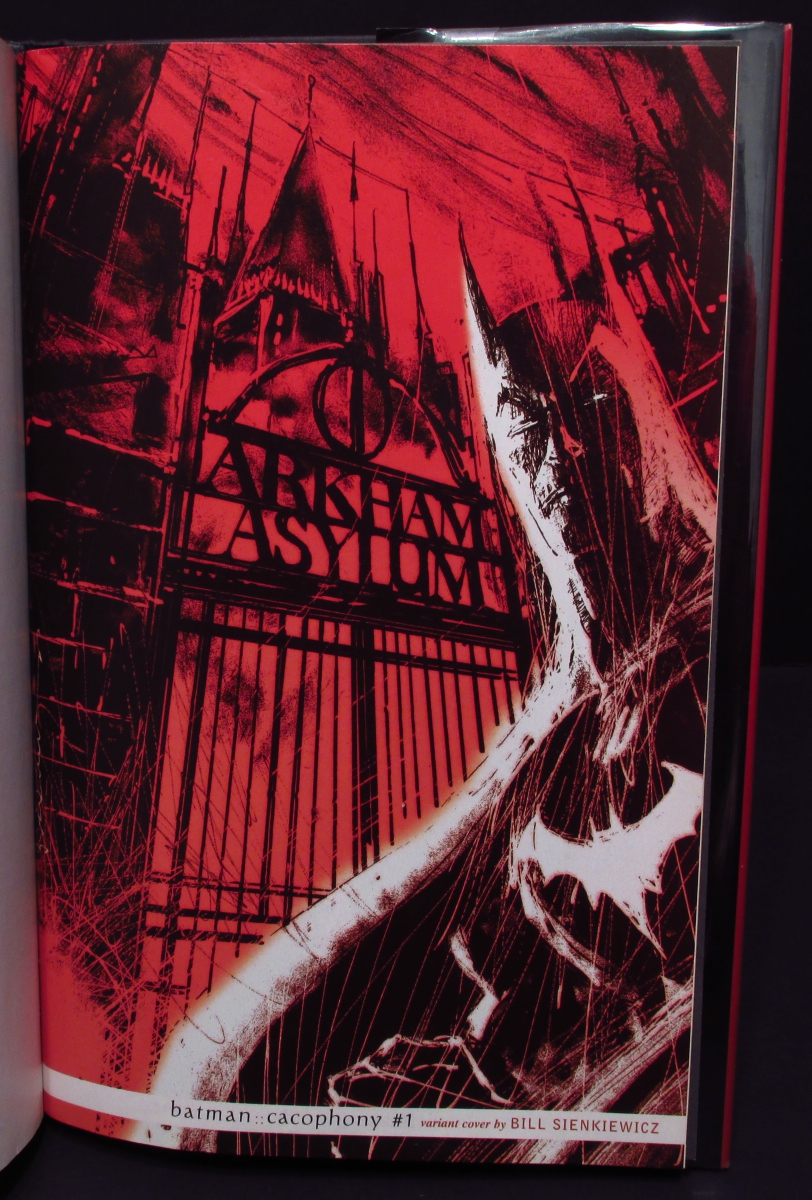 Inside are the typical credits about who made the book, publisher, etc. and so on. There’s even an intro by Kevin Smith himself, talking about how he and Walt are life-long pals, always wanted to do a comic together, etc. Fast forward into the book and you get to the story after a few pages. It starts off alright, pitting you in viewer mode during a break-in at Arkham (who breaks into Arkham Asylum? Apparently some people do – that’s acceptable). The art work from the beginning is great, what one typically expects, but the one thing I do find a tad annoying is the from-the-get-go over-emphasis of sound effect blurbs. “KZZZZT!”, “P-TOK!” and “PAF!”, all within the first 2 pages. Look, I get it that you have to give the reader some idea of what’s going on, but there’s “doing it” and then there’s “over-doing it”. Keep it small, simple, with less exclamation (as opposed to “lookie-lookie-lookie-at-me!!!”). The scene these sounds are happening during is supposed to be kind of zen in a way, gauging from the artwork and the character making said sounds. Just keep it quiet – not silent necessarily, but quieter as an overall tone.

Moving on, we’re quickly introduced to the intruder (which, by now – if you’re reading the book – you should’ve figured out who it was already), who’s noticed all-too-quickly by The Joker. I won’t throw down any details of the ensuing situation, but I will say it’s quite an interesting one indeed. So far, the writing seems great, the artwork a bit mixed (I’m definitely not a fan of how Walt drew Joker in this book, not at all, but I really dig Batman’s appearance), and then it gets really weird. I’m used to a sociopathic Joker, a sadist, etc., etc., but this is the first time I’ve ever come across a psychotically-homoerotic, under-sexed Joker. Regardless of your views on sexuality, the way that Kevin Smith wrote him in this story should make anyone wonder what he was smoking, drinking, and/or popping/dropping when he wrote this story. It’s just – for lack of a better word – WEIRD. It’s just not Joker, and uncomfortably-so. And no, I’m not kidding, he wrote him to be sexually-obsessed with Batman, seriously. It’s just not “Joker”, it doesn’t fit. Anyway, the rest of the story isn’t too bad. There’s a good deal of cross-over bits between Joker and Maxie Zeus, a bit of Zsasz thrown in for some sparkly filler, and of course Commissioner Gordon has to be in it (it’s a Batman in Gotham story, after all).

One thing that I really like about this book, is that you get to see the most excruciatingly human side of Batman – the side that always does what’s right, no matter how painful the consequences. There’s a depth here that I’ve never seen before, and I really, really like that. One other thing I strongly don’t like, is that toward the end, Joker looks like a strung-out-junkie cross-over between Michael Jackson and Dave Navarro. It’s creepy – and not “horror-movie” creepy, just, “ugly creepy”. Again, as I’ve already said, it’s just not Joker. Even after such an extreme life-altering and enlightening situation as he’d just experienced by this point in the story, he still holds on tightly to Batman’s junk, as though his brain is attached to the inside of the groin section of the bat-suit. It’s creepy, uncomfortable, and just confusingly out of place.

All-in-all, it’s not a bad book, it’s actually a pretty good read – just don’t expect anything over-the-top, epic-beyond-epic, spectacular here (from anyone except for the caped crusader anyway). Do you have any input? Have you read it or want to? Feel free to drop a line in the comments section below, as I’m interested to hear from you.

Until next time, I’m Ronald DMNKLR Smith for Dragonblogger.com, wishing you a blessed day, and reminding you that I want to know what you want to know about.