ORANGE, Calif. and SEATTLE, April 14, 2015 /PRNewswire/ — Alane Adams, author and founder of Alane Adams Studios, and Artifact Technologies are opening the door for eager fancon attendees to be the first to experience BattleKasters, a location-based mobile game that turns live events into game boards.  Based on Adams’ Norse mythology-inspired Legends of Orkney™ book series, the game will be officially released at Denver Comic Con on May 23. Adams and Artifact are inviting anyone to sign up as testers of the game at C2E2 inChicago, April 24-26. In addition to meeting Adams and being one of the first to play BattleKasters, attendees can also meet fantasy artist Dave Dorman (Magic: The Gathering, Star Wars), who will be signing art at the BattleKasters booth. 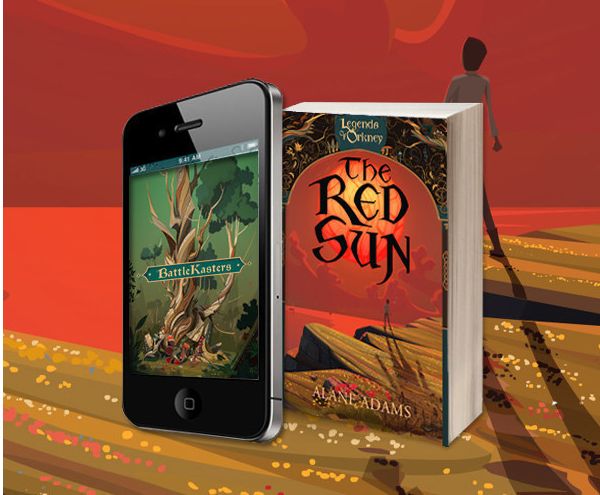 “We’re excited to bring a whole new kind of gaming to fancons,” said Brent Friedman, Lead Game Designer for BattleKasters and Co-founder of Artifact Technologies. “Everybody who tests the game at C2E2 and plays the game in Denver will not only have fun, they’ll be part of an experience that will change how people think about mobile games.”

Game testers can sign up now at BattleKasters.com or go to the BattleKasters booth at C2E2 (Booth #646) during the Chicago convention. Players who complete the approximately one-hour game test, which involves collecting digital trading cards, casting magic spells and closing the stonefire portal between Earth and Orkney; will receive a signed advance copy of The Red Sun, the first book in the Legends of Orkney™ book series by Alane Adams. Attendees can also enter to win autographed BatteKasters limited edition prints from Dave Dorman.

“Having created art for many different types of games over the years, I’m thrilled to be a part of an entirely new gaming experience,” said Dave Dorman. “The magic and characters found in the Legends of Orkney books and BattleKasters game lend themselves well to the style of art I create for fans.”

For BattleKasters’ official launch at Denver Comic Con May 23-25 attendees should look for the BattleKasters booth within the convention’s E.D.G.E. Programing Gaming and Development space. Alane Adams will be on hand to sign her books and speak on various panels related to transmedia storytelling. Adams and Brent Friedman will also sit on a panel moderated by Rob Salkowitz (Comic-Con and the Business of Pop Culture) to discuss the inside story of BattleKasters and look into the future of mobile gaming.

“Today mobile technology gives us the ability to more deeply immerse fans in a story,” said Alane Adams. “I’m looking forward to bringing the magic and adventure from the realm of Orkney to C2E2 and Denver Comic Con.”

The Red Sun is available for pre-order at AlaneAdams.com and Amazon.com.  More information on BattleKasters can be found at BattleKasters.com.

(Wendy) Alane Adams is a social entrepreneur, philanthropist, professor and award-winning author. After retiring from a successful business career, Adams founded the Rise Up Foundation, which focuses on creating collaborations to empower people to make lasting changes in their lives with a special emphasis on improving literacy in children. A believer in the power of transmedia storytelling, Adams founded Alane Adams Studios to create more interactive, immersive experiences for readers of her books.