I hate typing on touch tablets and have never been very quick typing on touch screens compared to physical keyboards with their tactile and springy keys.  This is why I tend to not do any sort of blogging or extending writing on tablet devices, but if I do I always bring with me a Bluetooth keyboard of some sort.  I test a variety of them and many are miss or hit, you deal with issues like the keys too small and compressed to get a natural typing rhythm, to some keys not being picked up due to weak Bluetooth signal to even latency where it can’t keep up with my typing.

So the BATTOP is a Foldable Bluetooth Keyboard that when folded is one of the most compact Bluetooth keyboards you can get for a phone or tablet.  The fact that it functions as a stand not just a keyboard is a plus. 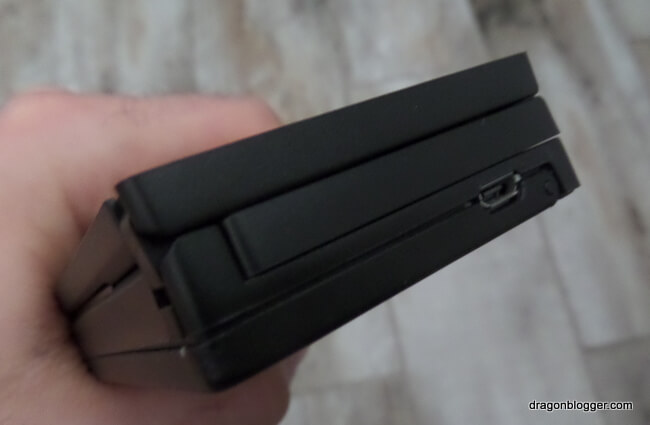 This keyboard comes boxed as a folded rectangle, it has has 2 folding joints for a tri-fold type of effect when the keyboard is closed. 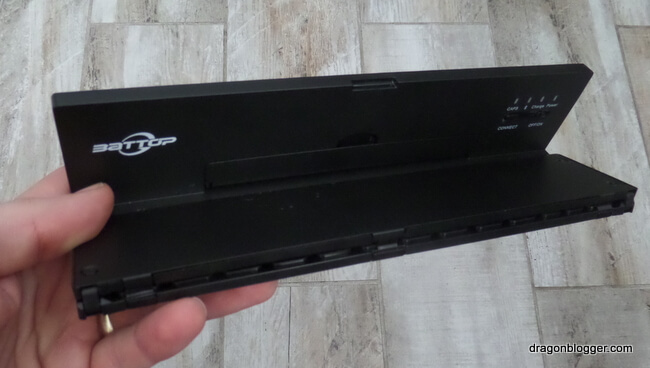 When opened up you can see clearly where the hinges are on each section. 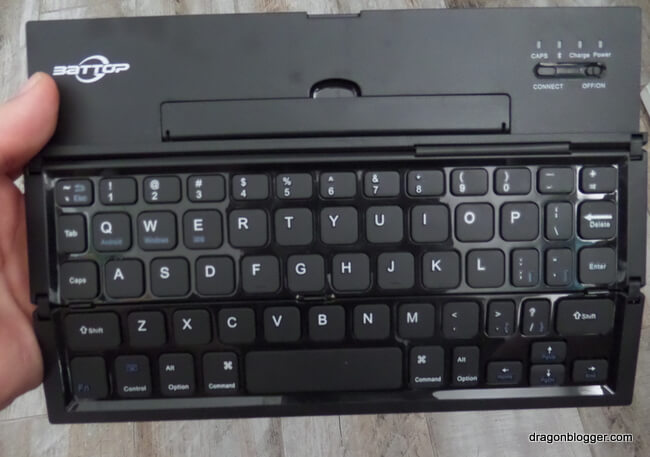 On the top/back of the BATTOP Folding Keyboard is also the stand portion which you unfold, in the front where the keyboard is is the slot which you can open up and it helps hold a tablet or phone in place in an angled position. 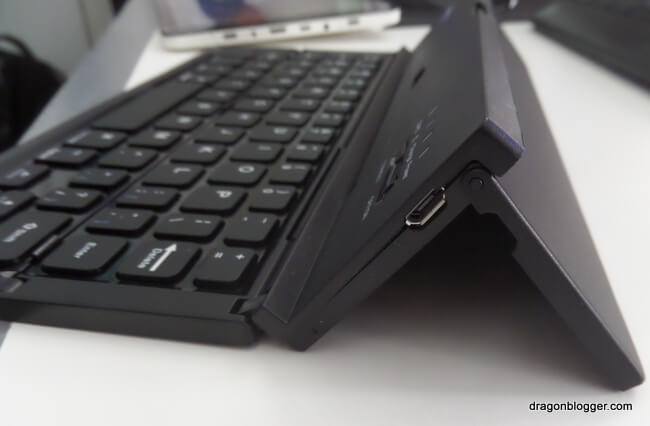 The USB Charging port is on the side of the keyboard and easily accessed as well whether the keyboard is folded or unfolded. 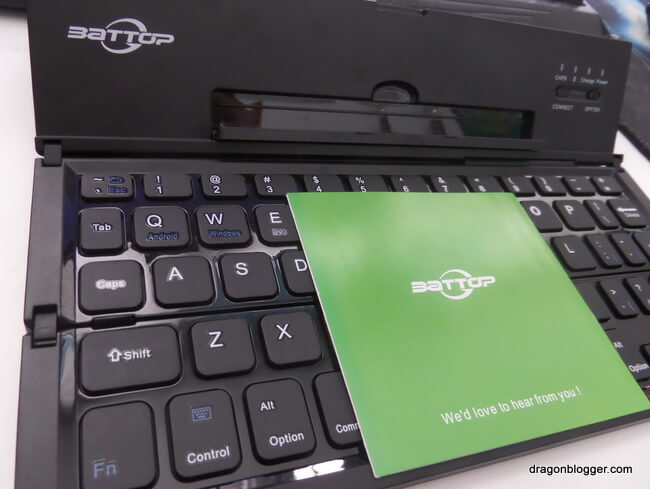 Now the keyboard itself was fairly heavy for it’s compact size, and the keys appeared to have decent size and spacing so I decided to pair and try the BATTOP Bluetooth Folding Keyboard first with my iPhone 5S which I left in the Otterbox Defender case because it is a pain to take the phone out of this case and put it back in, so I wanted to make sure the stand would work even if you had a thick case on your phone. 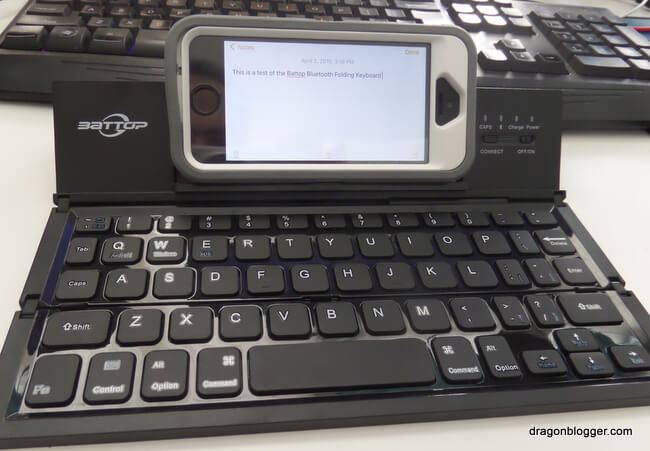 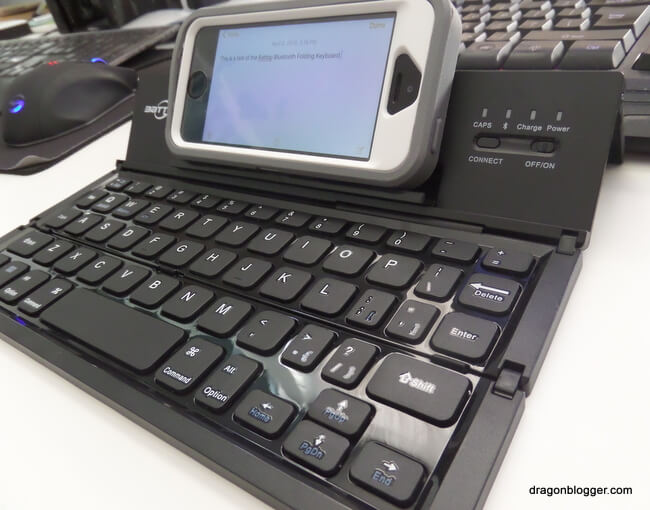 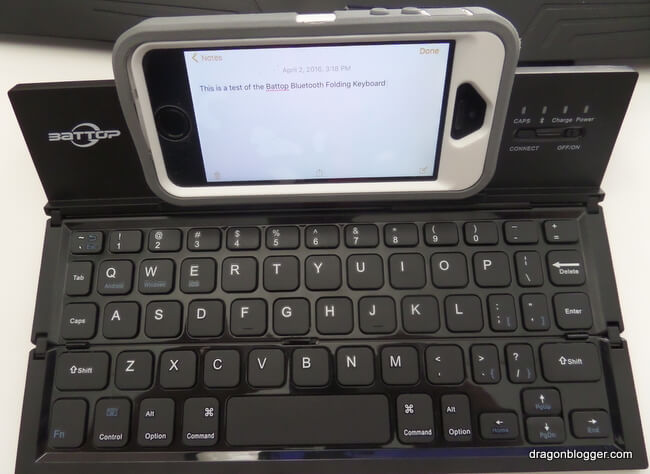 The stand accommodated the phone fine and I started typing a few letters, emails and Facebook posts.  The keys were a bit off, not naturally compared to a standard keyboard placement so I was very error prone and finding the backspace key with my pinky was a bit of a struggle.  The keyboard itself though was fairly accurate with keeping up with my keystrokes, no missed keys or errors in key press and on screen response functions.

I did however find that when I strike the keys I tend to have a drag while pulling my fingers off, this caused the BATTOP keyboard to slide constantly under the barrage of typing.  This made me immediately realize that this keyboard needed rubber bullets or bumpers when unfolded so that it provided better grip on the surface it was sitting on.  It just slid way too easily back and forth while typing to where I kept having to straighten it out every few minutes of typing and push it back into position.  Again it could just be me, but not having something to stabilize it on the surface it rests on was an oversight in my opinion. 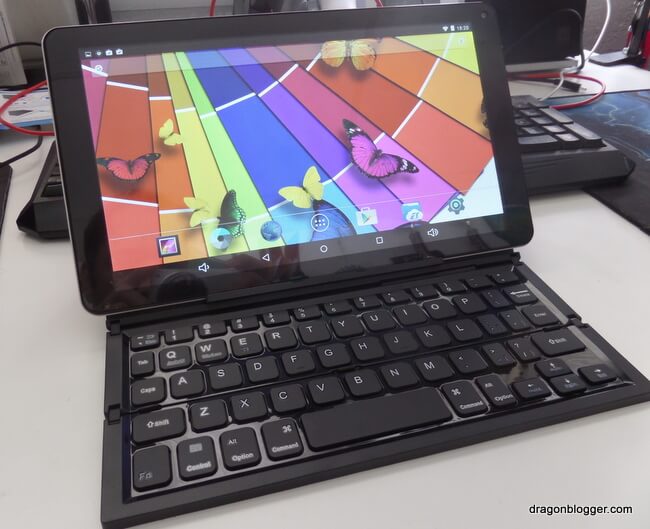 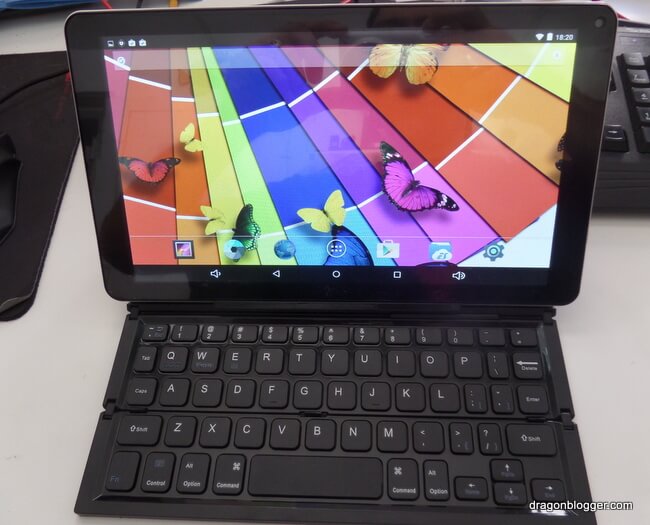 I did find that the BATTOP Bluetooth Folding Keyboard stand was able to accommodate the large size of the Kingpad V10 Android Tablet, I was surprised it would hold this large of a tablet in it, but it did and it was stable.  This was a much better use of it than for typing on the phone, but I found it couldn’t hold my Kindle Fire 8.9″ HDX when the Otterbox Case was on it, it made it simply too thick to stay on top of the stand part.

Overall after a few hours of testing and typing, I thought the keyboard was slightly better than several Bluetooth Keyboards I have reviewed, then again I rarely like very many Bluetooth folding keyboards.  It keyboard didn’t have the weighted feel of some of the heavier and larger foldable Bluetooth keyboards (the ones that fold horizontally and become large bricks) which was a plus, but it really needed bumpers to grip onto the desk surface, that would have been worth 1/2 a star easily, and the other suggestion would be for having 2-3 angle adjustments on the stand itself and for it to be designed a bit better for tablets, it clearly was designed more for phones than for tablets. The final mention is that when closed there is nothing that snaps or holds it closed, if you hold it the wrong way it just falls and flips open on it’s own accord, I would have preferred some sort of snapping or locking mechanism so when you fold it it can’t just simply fall open if you are holding it wrong.  Overall though the price is very competitive and better than most other folding keyboards and for the price of just around $30 I think this weighs it out to be a 4 star product, it would have been 4.5 stars if it wouldn’t have slid so much while typing on it and if it had a larger holder part for the device.

Disclaimer: BATTOP provided us with the Folding Bluetooth Keyboard so we could do a showcase and share thoughts on the product.  All opinions are 100% authors and authors alone.