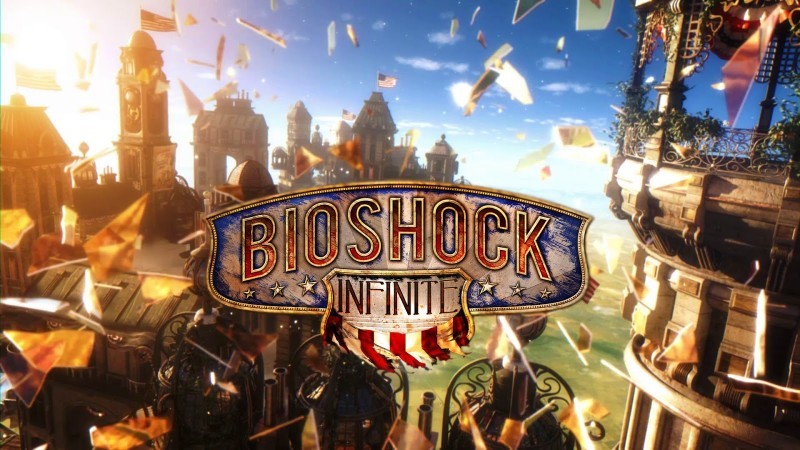 Hey there.  The much anticipated Bioshock Infinite was finally available to the masses on March 26th!  After several setbacks, a few pushed back release dates, and awesome trailers, Irrational Games and 2K games finally released Bioshock Infinite.  I finally had my hands on the game that I have waited for over a year!  The trailers teased of a different game, one that was different from the dystopian city of Rapture, one that was a complete contrast to the stark settings of the first 2 Bioshock games.  Bold?  Definitely!  Worth the risk?  Well, let’s find out.  Here is Dragonblogger’s official review of Bioshock Infinite.

In a single word, Bioshock Infinte is simply beautiful.  The colors are vibrant, the scenery is detailed, and the statues, my goodness, those statues have a lifelike presence to them.  Bioshock Inifnite is definitely deserves art status like marks for it’s visuals.  When you first step into the world of Columbia as Booker DeWitt, the blue sky pops amid a sea of floating buildings and statues.  More than a few times, I stood in front of them and just admired to details.  Even the game decided to add a telescope here and there so that you enjoy the scenery.  Of course, the scenery plays a part of the story but I loved the the game incorporated the visuals into it’s game play.  But bright and pretty is not all that the game does right.  Bioshock Infinite still makes great use of the colors and surrounding to build tension and atmosphere.  Despite the city of Columbia being in the sky, Bishock Infinite finds a way to create a tense atmosphere for different areas of Columbia.  The graveyard is dark and eerie, the fairgrounds are bright and festive.  Once you step into the city of Columbia you just get that sense that the city is a character of it’s own.

The game play of Bioshock Infinite is similar to that of the previous Bioshock games, with slight variances.  You now obtain Vigors instead of Plasmids, and you need Salts to power them instead of Eve, and there still are voice recordings (voxophones) littlered about Columbia for you to find.  You also pick up weapons and items that are scattered around the areas and picked up off of fallen enemies.  Nothing new there.  Now for the variances.  Early on in the game you are introduced to your means of “sky travel” and your one and only melee weapon, the sky hook.  As a melee weapon, the sky hook is similar to that of a wrench or pipe.  You pummel enemies with it and can perform “fatality” type attack when the enemy is low on health.  But where the sky hook earns it’s stripes is on the sky lines that are found throughout the city of Columbia.  With a touch of a button, you can launch Booker into the skies and ride the rails to unexplored heights.  At first, it may seem to be a daunting task to zip around the sky and focus on eliminating enemies.  Bioshock Infinite eases you into the new play mechanic and then shortly thereafter thrusts you into a full blown sky lines battle.  As my boss once told me, “when your ass is in the fire, you learn real quick.”  I love that Bioshock Infinite takes that approach as opposed to holding your hand during game play.

The weapon upgrade system was improved in Bioshock Infinite.  Instead of looking for hard to find upgrade booths, you have more freedom to purchase weapon upgrades.  Each weapon is allowed four upgrades.  The new upgrade system will allow the player to play to their strengths.  If you are a master with a shotgun, you can focus on fully upgrading your shotgun as opposed to wasting your money on upgrades that you will not use.  Bishock Infinite has an abundance of weapons to use and the game adds a strategic element when you are forced to pick what weapons you wish to upgrade.  Same thing goes for the Vigors.  Each Vigor has 2 upgrades.  There simply is not enough money in Columbia’s streets for you to collect and upgrade everything so you will have to pick and choose your upgrades wisely.

Another great addition that I thought was extremely helpful was what I call the “arrow of guidance.”  With a touch of a button, an arrow will appear on the screen and guide you to where you need to go.  I’ll be honest, I used the hell out of that guide, but I used it to venture away from it.  lol  Because I’m one of those types of guys that like to explore, I would avoid going towards the arrow until I was certain that I checked out every nook and cranny that I could find.  Because the game does not have a map to help you navigate, the arrow was a welcome addition.

Now, on to Elizabeth.  Elizabeth is not only a character in the game, she is an integral part of the gameplay of Bioshock Infinite.  When you first encounter Elizabeth, she follows Booker wherever he goes.  And NO… the game is NOT one giant escort mission.  At first it may seem that way, but the game makes it extremely clear that you do not have to protect Elizabeth during battles.  On the contrary, you want her to intervene.  Let me explain, by using her powers, Elizabeth can “find” ammo, money, health, salts, or weapons that she will toss to Booker during the heat of a battle.  Also, depending on the surroundings, she can “summon” allies, cover, hooks, med kits, and environmental hazards that you can use to your advantage during battles.  Trust me, once you get to the later stages of the game, you’re glad that Elizabeth was there to toss that med kit at the last possible second or tossed some much needed ammo.  As mentioned before, Elizabeth is INTEGRAL to surviving in Bioshock Infinite and the game pulls it off seamlessly.  Never once during my game play did it feel like she was in the way.

The story is captivating, it’s intriguing, and you know what… it’s not going to be for everyone.  This is where Irrational Games made it’s boldest move.  The Bioshock fan base is in love with Rapture, Big Daddies, and Little Sisters and for Irrational Games to deviate away from that is a move that will not please everyone.  I, for one, loved how Bioshock Infinite ventured away from Rapture.  The game felt different, yet… similar.  The story line itself seemed similar to that of Jack’s from the first Bioshock yet, not quite the same.  The undertone throughout the game hints towards Bioshock’s roots but never fully admits it.  Booker DeWitt is approached by a strange man and is tasked to “bring the girl” to “wipe away the debt.”  While in Columbia, Booker is deemed the “false prophet” and the prophet and leader of Columbia, Zachary Comstock, unleashes an army to go out and stop Booker at all cost.  When Booker finds the girl, Elizabeth, he not only finds out that she has mysterious powers, but with her comes the guardian of Elizabeth, the Songbird, which will stop at nothing to get Elizabeth back.  Through their travels, they learn the true meaning of Elizabeth’s powers, the meaning of Booker’s mysterious mark on his hand, and the meaning of the prophecy. 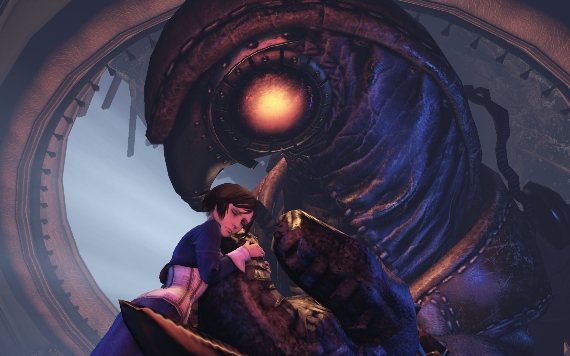 If you are a fan of Bioshock, do not miss out on Bioshock Infinite.  It has everything that you love from the first two games and then improves on it.  Elizabeth’s character is revolutionizing what a NPC’s (Non Playable Character) role should be and is incorporating intriguing strategies when in the heat of a battle.  The game also has a high replay value to the game.  Once you have beaten the game, you can challenge yourself in “1999 mode.”  Let me tell you friends, this mode is HARD!  This mode is not for the standard player and you will be challenged.  And to top it all off, we have been promised DLC in the near future that will feature new characters and additional story details.  I for one can’t wait to check that out.  But in the in mean time, I’ll be hanging around in 1999 mode.  Grab Biochock Infinite and discover the infinite possibilities that the City of Columbia can offer you.  Later!