December 22nd, 2014, Taipei, Taiwan – BIOSTAR is introducing a new design for the boards, whereby they are adding an integrated chip to strengthen electrical stability and prevent damage from lightning strikes and electrical surges. BIOSTAR is the first Motherboard manufacturer to offer motherboards with these features and specifications so called “SUPER LAN Surge Protection”. Going forward, all BIOSTAR series products will incorporate this technology. 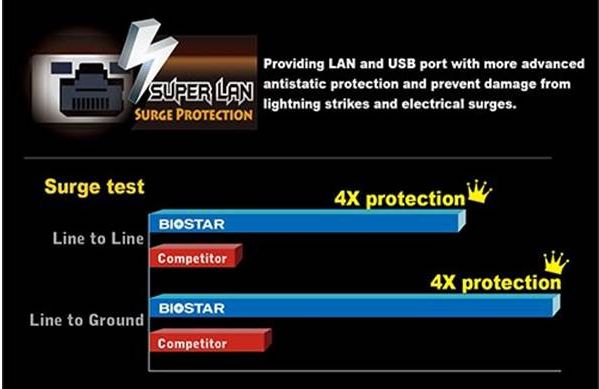 PC systems can be damaged or destroyed by electrical surges. These are voltages which are much greater than the normal working voltage and which appear in a system for a short period of time.

BIOSTAR “SUPER LAN Surge Protection” wants to insure that the motherboards have a high degree of protection from such surges by the use of hardware devices, directly built into the motherboard, which limit surge voltages reaching protected equipment to safe levels.

Look for these new boards at: http://www.biostar.com.tw

BIOSTAR, a manufacturer dedicates in motherboards, graphics cards and industrial computing systems. Since its establishment in 1986, the BIOSTAR GROUP has become a major motherboard supplier in the PC industry. In order to pursue continuous growth, BIOSTAR has invested heavily in acquiring the physical and human resources to excel at research and development. With a constant emphasis on quality, BIOSTAR always seeks to offer products with the highest price-performance ratio