*Disclaimer: All products are sent to DragonBlogger.com at no charge for review purposes. This in no way affects my objectiveness in evaluating products*

The Blackzebra HP-S1 is the first set of Bluetooth headphones I’ve owned. For the price of $20, they’re pretty darn good. The manufacturer makes several claims, which I will evaluate in the order below: 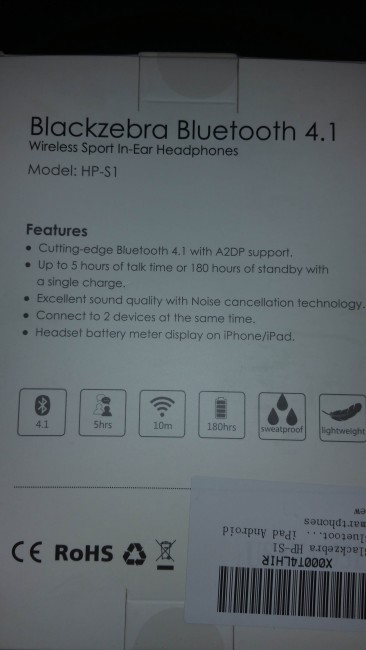 Features as written on the manual

A2DP is a Bluetooth profile that allows stereo communication from A2DP sources (almost all “smart” technology features this). So, quite simply, a stereo input should yield stereo output. Put on some metal, where left and right are often separated harshly… listen, listen, listen… headbanging, rocking out… here comes the breakdown… left isolation track clearly on the left… Right Isolation…. Clearly right-only. This is a pass/fail type of technology and the device passes.

Sweatproof? They had better be! I only wanted these things to accompany me on runs anyway (before I discovered the benefits of wirelessness all day, every day). So, I ran to the dojo in 100+ degrees for the first full week of having the headphones. To give some perspective on the kind of sweat you produce running in the dry desert of Las Vegas, I’ve been showing up drenched in the kind of sweat which leads me to be banned from training until I’ve rehydrated with at least half a liter of water.

And yes, the headphones work exactly as they should the entire time, even when pressing buttons with sweaty hands.

To be completely frank, I haven’t been able to kill these things in standby mode, but I’m also not willing to sit for over a week without using them just to see what happens. The short version is, standby will not kill your battery by any stretch. Pretty much any time I’m not using these headphones, they’re in standby. I haven’t noticed any drop in playback time from my initial full-charge test. The impact in standby is minimal. But, to be clear, 180 hours is 7.5 days of continuous standby. As for playback, I’ve fully charged and fully drained the device (no standby) 3 times. Each time, I was within 5 minutes of the 5 hour claim (both over and under). I’m told this kind of battery life diminishes over the life of the product, so I’ll be sure to post an update if that does indeed happen to me. 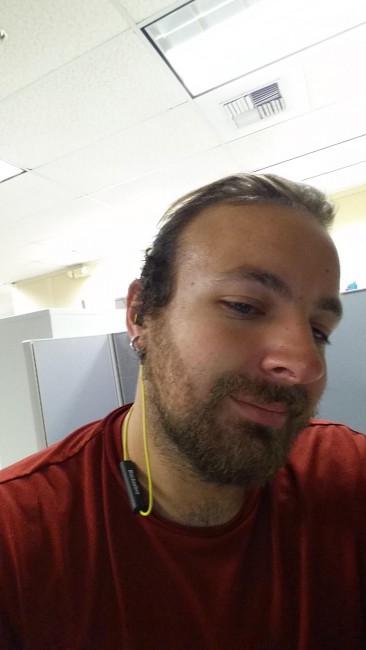 There’s no debating the sound quality here. These days, it seems $20 is a fair threshold for high-fidelity or high-quality audio output. While these Blackzebra Bluetooth headphones certainly don’t stand out, they also don’t fall behind either. Above mediocre, below amazing.

As for the Noise cancellation technology, I get some frequency chirps and feedback when the outside noise doesn’t match the frequency emission within the headphones (mostly in my home). However, once the music starts, all of that goes away. They aren’t soundproofed, but the frequencies they cut are mostly from ambient urban noise (planes, cars, electronics). In general, they cut out annoying sounds and not much of anything else. Whether this is good or bad depends entirely on what you want to use the headphones for. As a fitness accessory, they work great.

This is another pass/fail kind of test. The claim is that you can connect the headphones to two devices simultaneously (instructions included) and switch between calls effortlessly. The short answer is yes. The central button has many functions, one of which is switching between calls. It doesn’t matter where the call comes from, as long as the device is within the 10-meter (32.8084-foot) range. For me, that means the device can be charging in my main room and I can walk out to the edge of my driveway before the sound cuts out. That’s exactly as far as I ever want to be from my phone, so it works for me. The actual distance from my charging outlet to the curb is 29 feet. The headphones start to skip a bit, but they don’t fall completely out of range until I start crossing the street. . Still, 29 feet is devilishly close and that extra three feet will never make or break a product for me.

Although it only works on two i-Portables, it does indeed show battery life by percentage on the alert bar, and hours/minutes remaining in the pull-down menu of my dad’s iPad mini.

There are a handful of uses for the controller listed in the instruction manual. All of them work as described. The instructions are a little unclear on making the previous track work (use two long presses) and I personally had an issue with not releasing the button enough to register a second click. User error aside, all of the miscellaneous features work! 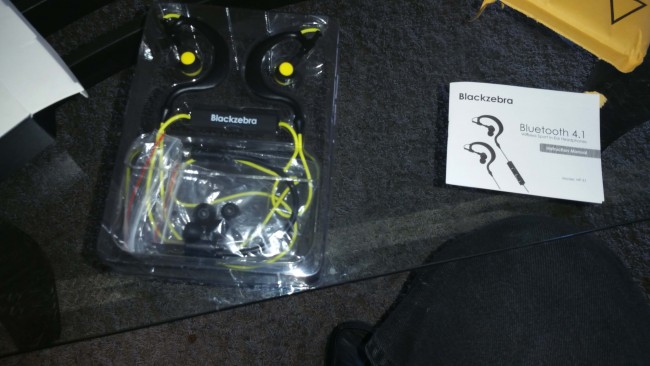 Everything in the box

With the exception of reverse trackskipping, the things work awesome. Below are some general evaluations which didn’t merit a full section of discussion:

Ergonomics, Comfort: 8/10. The headphones need to be broken in to really be comfortable. Starting out, they were slightly tight for my ears. Now, they’re pretty solid. The smallest buds would probably make them more comfortable in my ear, but I’m sticking with this size to minimize external noise.

Meeting Manufacturer claims: 9.5/10. A half point for the few feet of discrepancy, though that really is such a minor difference that I only noted it out of thoroughness, not because I particularly would have noticed or cared.

Ease of use, intuitive design: 10/10 Without reading the instructions, I was able to figure out what every light flash meant as well as how each button could be used without picking up the instructions. In fact, today was my first time looking at them, only to see if I was doing something wrong that separates “rewind” from” previous track”. I wasn’t. If the previous track feature works for you, let me know in the comments below!

The headphones are ergonomic and comfortable, but I’m very aware of their mass in my head. The range is slightly off for my expectations (I expected ten meters before cutting out, not ten meters to disconnect). Otherwise, they’re a fantastic set of headphones and they will certainly get a lot of use!

Update:  This must be a defective unit that was received as it stopped receiving sound in one ear a few days after continuing to use it.  This doesn’t appear to be the normal behavior of the headphones based on the many Amazon reviews and other user experience, so despite that we had problems with it you may want to check them out.  The brand will send us a replacement to test at some point but we don’t know when that is.

'Trick is a linguistics major with an emphasis on culturalism. He hopes to bring accurate and thoughtful content to his followers and inspire others to create with his fiction. Downtime spent playing one of many instruments, training in Aikido, or geeking out to the latest Marvel/DC/Any Entertainment media!