After a fairly short break, Lost Girl returned with a huge question for fans, is Bo going to end up bad?  Thus far, she has sided with the Light side in most instances but still not chosen it as her “side”.    This has proven a good thing, especially since the Fae, both Light and Dark, needed to band together to beat the Garuda at the end of last season.  However, Bo finally tapped into her dark side when she saved Trick and no one knew what would happen with her. 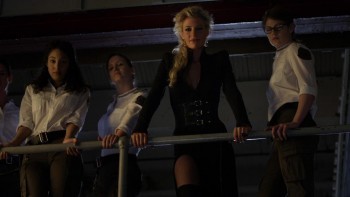 As Caged Fae opens we see Bo running from an unseen foe.  She runs into two men in an alley and beats them both up, but not before one cuts her face.  Once she escapes this altercation, she finds a club where three men are attempting to get in.  Bo does an “eenie, meenie, minie, mo” to choose one to suck the Chi from to fix her face.  This is something she has never done before so it leaves the viewer wondering if she has indeed turned bad.  To make matters worse she tells all those waiting to get in the club that the drinks are on her and throws lots of money into the air before running again as her unseen foe chases her again.  Down another alley, she runs and bursts into a door, which turns out to be Trick’s bar.  Not what I expected for the front door of the bar we have seen the inside of for almost every episode (or had it been every episode?).

Turns out Dyson is the one chasing Bo.  Kenzi and Trick are appalled at Bo’s behavior as she taunts Dyson while he arrests her for her crimes.  Hale is nowhere to be found for the moment.  Turns out that it was all a ruse to get Bo into the Fae prison to find out what the Amazon women who run it are up too.  Lauren is even acting like a Fae doctor, complete with skunk stink to mask her human scent, in an attempt for her and Bo to find out also what happened to the previous doctor.  Bo manages to befriend her cell-mate and in the midst of things, takes a beating for Sylvie.

In the meantime, we find out that Hale is now the acting Ash and hiding in the back room of Trick’s bar.  He claims he wants to be closer to the people still.  Dyson still has to do his job but without Hale, Vex is able to talk Dyson into letting him help with the detective work.  Unfortunately, Vex is too evil to do a good job at it and Dyson must threaten him since it looks like Vex is going to give away what the pair are.  Kenzi is not thrilled that her best friend is in this prison, powerless since it sits on a fault line where all Fae powers are null.  She does manage to get in acting like Bo’s human lover and with a kiss that is totally unexpected for the viewers, a special contact lens is passed between the two. 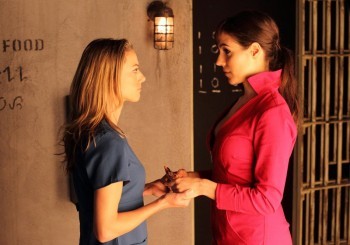 As Kenzi finally convinces Trick, Hale, and Dyson they need to save her and Lauren, Bo has managed to discover that the prison warden has been impregnating prisoners who were believed to have been released.  Sylvie is full-term when Bo finds her in a special room behind the warden’s office and the girl just left the day before.  While trying to deliver Sylvie’s baby, they are captured along with Lauren.  One of the prisoners helps Bo find out the truth about the warden, the she is actually a he, when she tells Bo it is now or never and Bo kisses the warden.  Of course, the Amazon women are appalled because when a boy is born to one of their kind, it is left to die.  Dyson and Kenzi are coming to the rescue when they see Lauren and Bo kiss passionately, after Bo having just declared they should attempt a real relationship.  Dyson has lost his chance to get the girl he loves back because he didn’t do as Kenzi told him, he waited to tell Bo his love was back.

Despite things looking good, Bo is worried about turning evil and confesses to Trick in the bar that she knows her father was Dark and hopes it won’t affect her.  He comforts her stating it’s not possible but as Bo leaves the bar, through the alleyway door we now know is there, she finds a random stranger, steals some of his Chi, and leaves him unconscious on the ground.

Just makes you wonder how long until her friends will find out she is doing this.  It also makes you curious if Bo actually realizes she is doing this or if her dark side is coming out on its own like it did when she fought the Garuda.  We will have to wait and see as the season progresses.  In the meantime check out a sneak peak at next week’s episode.