Brainwavz targets the high end earbud market with the M100 earbuds and I have to say that they deliver superbly with this fantastic model. Here are some features and specs to help you get started. 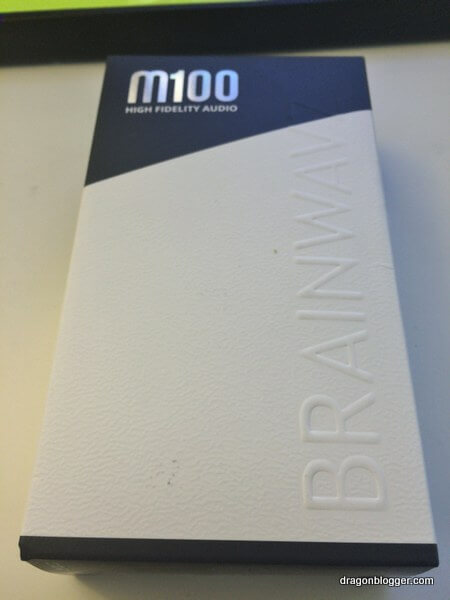 After opening the box you can clearly see the ear tips, foam tips, shirt clip,carrying case and Velcro cable tie.  I tested out a few tips but the default tips on the M100 worked perfectly for me so I didn’t have to really use any other tips to start with. 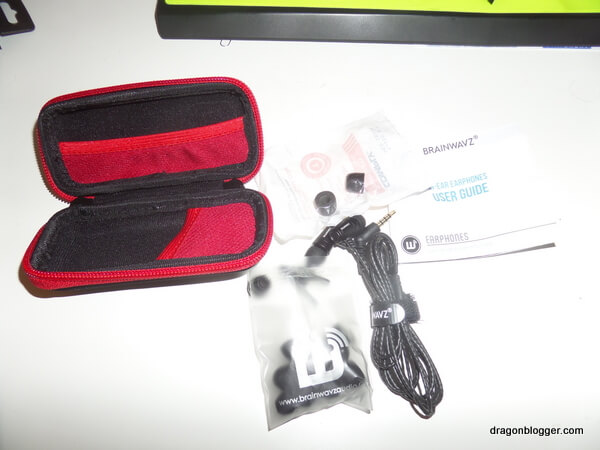 On the earbud cord itself is the control switch, which has your plus or minus volume and track skip buttons as well as your pause/answer/hang up button for phone calls.  This is a wired earbud so not wireless here you just plug it into your aux jack in your phone or tablet and you are good to go.  You can also use it with your PS4, laptop or any other device that supports 3.5mm input jack. 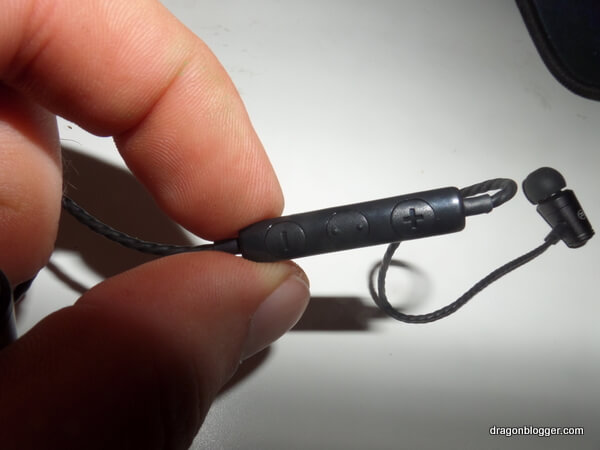 The cable is a plastic coated braided cable this makes it resistant to twisting up and kinking and also makes it stronger reducing the chances of wires snapping inside the cord as a result of twists or knots. 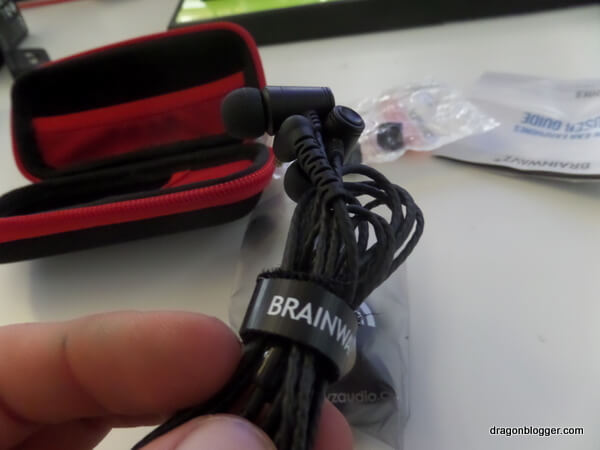 Each earbud in the Brainwavz M100 is clearly marked with an L or R for which ear it goes into.  The control box is also on the right earbud side so you don’t have to look at the earbud letters knowing that too. 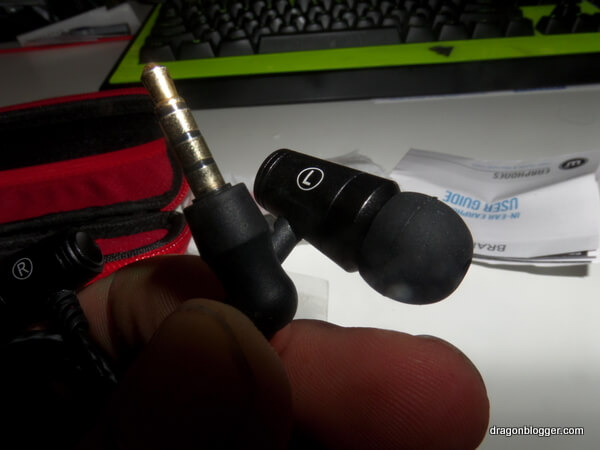 The carry case is hard shell and durable and is a nice touch, though is a bit large for the earbuds only as it is large enough to store all the accessories as well as the earbuds.    I felt it could have been smaller to fit in a purse and is good for travel putting in your luggage but most people would wear their earbuds or keep it in a purse or small bag and it was a bit large for that. 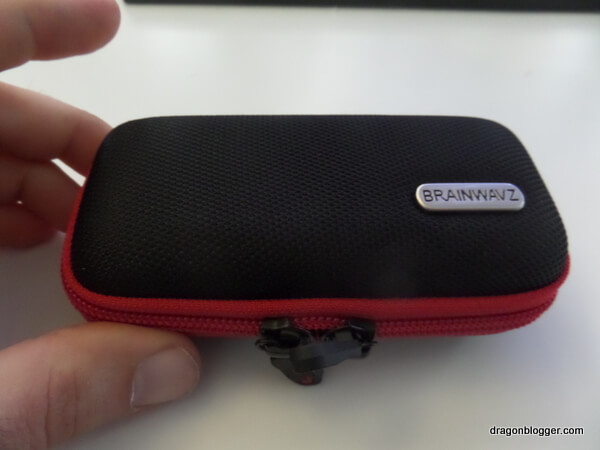 Now, these earbuds you can wear traditionally like in the images below: 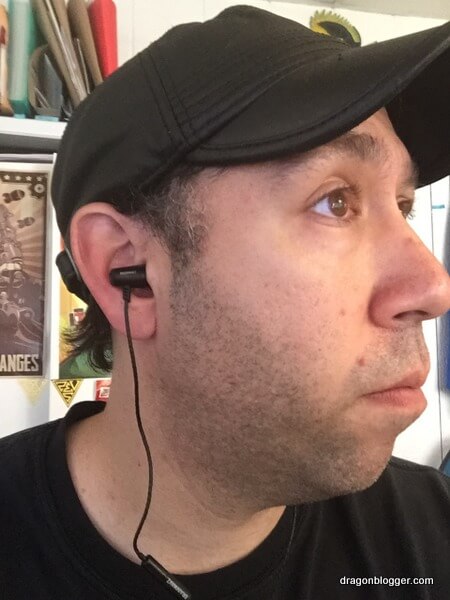 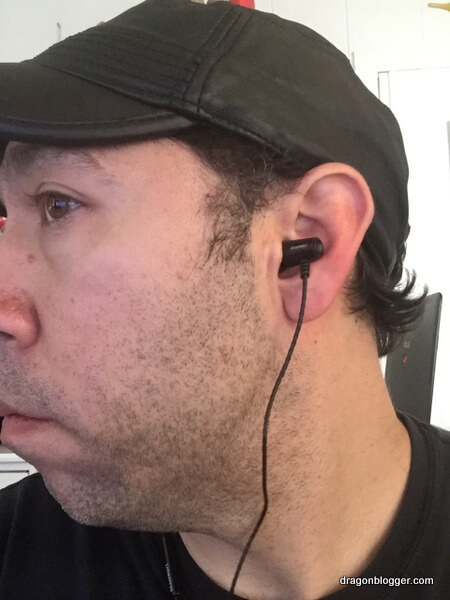 Or you can wear them with the cord wrapped around the earlobe which adds better support so you can jog or run with the earbuds in without having them pop out from the tension on the cord. 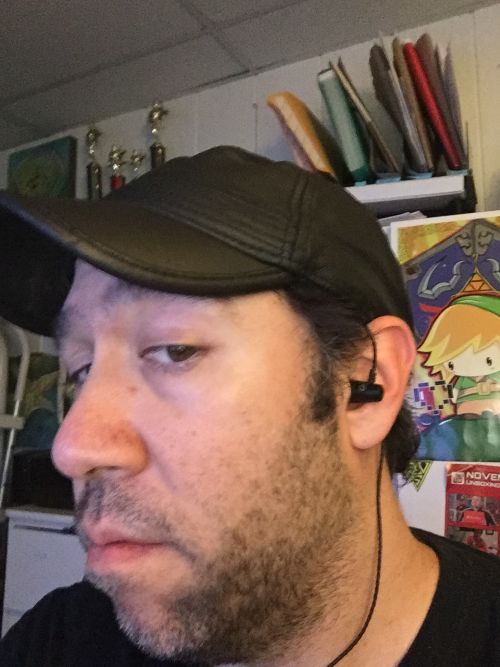 I have used the Brainwavz M100 as my exclusive earbuds for 3 weeks and I can tell you that they are incredible and sound amazing.  Everything from the deep base to the clear and crisp high notes sounded much better than even the Bose earbuds that I have which cost $20 more.  These earbuds give you a premium sound and don’t skimp in the volume or the deep bass frequencies compared to other earbuds.  In fact I can’t say I have tried any other earbuds that match this sound quality in any price class under these.  These sound better than most wireless earbuds and headsets I have reviewed as well and blow away anything except the premium headsets that are $80+.

I listened to audiobooks and the narration seemed to just be so much more engaging than my previous earbud or headset experiences.  Music ranging from Electronic, Video Game Soundtracks, Metal, Rock just all sounded fantastic and delivered more energy from listening than with lower quality earbuds or headsets.  It makes a difference, and all you need to do is listen to that same song with a cheap pair of earbuds, then compare to the Brainwavz M100 to know how much better they are.  Now the only other earbuds I can compare them to firsthand is the Bose SoundSport and the Brainwavz M100 sounded better and are generally $10 cheaper in my opinion.  I found the Bose ones to be too ‘buzzy” and ‘bassy’ compared to the M100 almost like they just pushed up the bass at the expense of clarity.

If you are looking for a pair of high quality earbuds to deliver your music or audiobooks then I can highly recommend the Brainwavz M100 though at the price they are not cheap but in line with other premium earbuds.

Content Creator/Owner of https://t.co/iWP6afuOc9 for Tech, Game, Entertainment and streamer at https://t.co/594fXMdMIA
_TheDragonCast: We are proud to announce the return of one of our very special former guest, #MortalKombat artist,… https://t.co/7oUoq6aZLV - 29 mins ago