I have found my new favorite pair of wired sports earbuds that cost less than $30 with the Brainwavz XFit XF-200.  This simple pair of earbuds has incredibly crisp sound and includes enough ear piece types to accommodate any ear canal size.  Now the thing I like most about these sports wired earbuds is simply the design and fit on how the wires go over and around the ear, and the ear bud locks into place in your ear firmly seated between your earlobe and the sound going right into your ear canal. 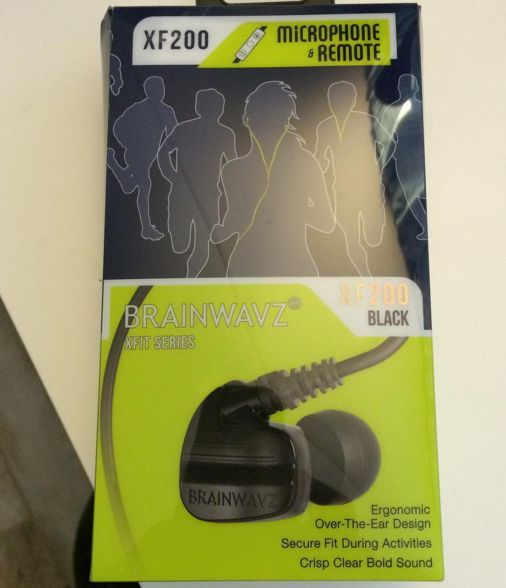 Now the main reason you would want a wired earbud instead of Bluetooth is obviously convenience in not having to pair a Bluetooth device or deal with remembering to charge devices.  Something like the Brainwavz XFit XF-200 you can leave all the time in your car, or in the pouch it comes with and leave it in your gym bag and it is ready to go 24×7 without worrying about charging.

As mentioned it comes with a variety of extras including a clip for your shirt, a Velcro tie strap for the wire is included which is another really nice touch as well. 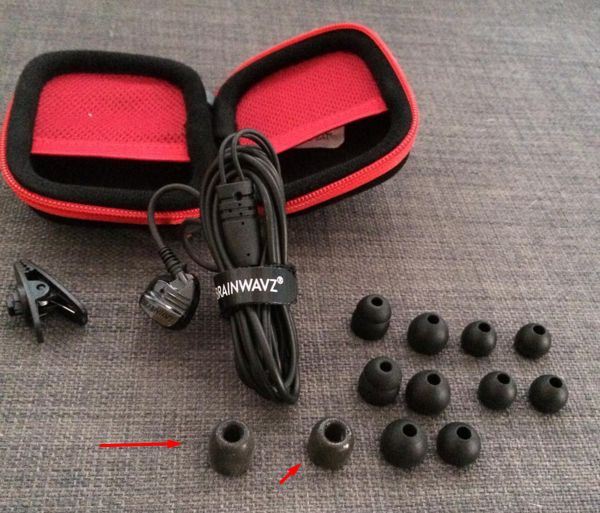 Of the various ear attachments, the ones the red arrows point to are the Noise Isolating ones that I want to point out.  They are thicker foam than the others and provide almost a complete dampen of all sound outside around you. They do a great job of ensuring you hear nothing but the music, in fact they block so much sound I recommend them on planes but not while jogging in streets as you want to hear ambient cars or noise around you just in case.

The earbud attachments made these fit perfectly in my ear, or my twelve year old son’s ear who is using these permanently now after the review to replace his Bluetooth ones as he got tired of having to pair them and deal with battery dying, he just wanted a nice set he can plug and play when he is in school at recess or in the computer lab during study time.  The carry case holds all ear piece attachments and includes a silica pack to remove any moisture that may be on your buds from sweat, so it is a nice thing to leave the silica pack inside the case at all times if you plan on using it. 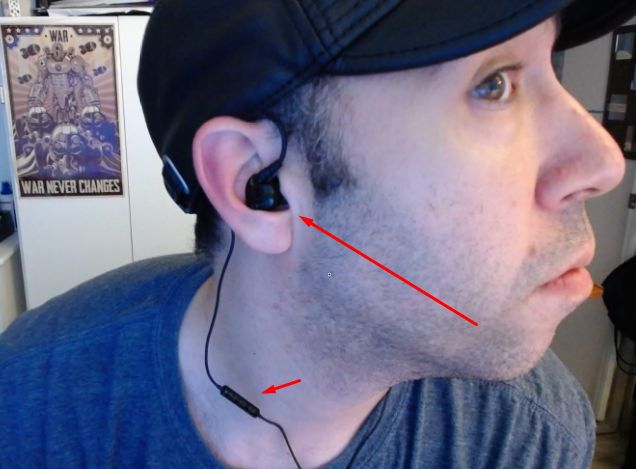 As mentioned you put the wire over and behind the ear and twist/turn the earbud to lock it into your ear properly, this took some practice and about 15-20 seconds to figure how out to get right, but once you feel it lock into place in your ear you will always know you did it right because it seats and stays put. The control box is also on the right earbud, this includes your +, ” and – buttons which are used to raise, lower volume, pause and if held long enough it will skip and previous track actions as well. 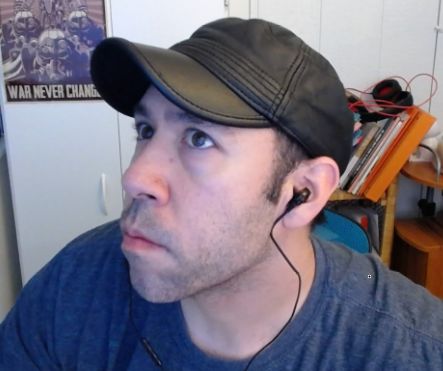 The sound is actually excellent from a $25 pair of earbuds, crisp and clear, I listened to Adele’s Hello and it was much more crisp and vibrant than some earbuds I reviewed at twice the cost.  The Police, Eminem, Depeche Mode, Daft Punk, Moby and all my other tracks sounded great. Now there is much more Treble than Bass in these earbuds, and they sound very clear and vibrant as mentioned but don’t hit the low bass frequencies and provide that “feel” from bass like some bass focused earbuds.  They won’t provide as much bass as $99 Bose Earbuds for example which I use as my baseline for bass in earbuds, but you also are paying 1/4 of the price for earbuds that I think sound better in the mid and high range than the Bose ones which do make the music a little “blurry” by providing so much bass.

These are definitely worth the 5 Star Editors Choice award for sound quality for the price!