The Cabin in the Woods releases on DVD and BluRay on Tuesday September 18 and if you think this is just another teen slasher flick, well you are wrong.  The movie, co-written by Joss Whedon, is definitely a slasher style film but it also a comedy and probably not what you expected from the trailer.  I know I was surprised. 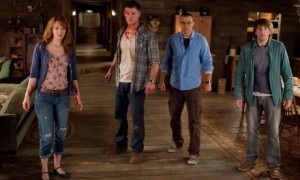 The basic plot of the story is about five college-aged friends who take a trip to a remote cabin for a vacation.  Unfortunately like many horror films, bad things happen to the kids and one by one they fall victim to a horrible fate.  Well, sort of.

The truth about the cabin and what happens has to do with a group of workers in the US who bring five young adults to this site every year for this sacrifice to appease the “Ancient Ones”.  It is never known exactly what these creatures are but if they don’t get their sacrifice, they will destroy the Earth.  This isn’t the only one which takes place, there are others around the world, and at least one must be successful for the “Ancient Ones” to stay asleep.

There are technicians who control the environment of the cabin to make sure the kids eventually head into the basement and choose an item to bring forth their doom.  All the workers at the facility, which plans and controls this yearly event, place bids on which evil will be the “winner” (here’s where some of the comedy comes in).  The one which is chosen resurrects a redneck zombie family.  In order for this scenario to work, the kids must die in a certain order as they embody specific archetypes the “Ancient Ones” want, although none necessarily are exactly what their archetype is.  In order they are: the Whore, the Athlete, the Scholar, the Fool, and the Virgin.  Interestingly enough the Virgin can survive and not awaken the baddies below but she must fight for that “privilege”. 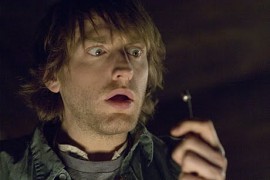 As a Joss film, it should be no surprise that some familiar faces show up in the film from past TV shows.  Fran Kranz from Dollhouse and Amy Acker, who is from Angel and Dollhouse, are major characters in this comedy horror flick.  There is another major star that makes a cameo, but I won’t spoil that surprise for you.

So if you want to see a movie that will make you laugh and scream all at once, pick up a copy of Cabin in the Woods.  I promise you will enjoy the humor and horror this movie has to offer.  Just make sure you pay attention to the chaos at the end.