In the early 19th century, Cape May – a city at the southern tip of Cape May County, New Jersey – emerged as one of the famous coastal tourist areas of the East Coast of the United States. During the 19th century, the city experienced various fires, especially the Great Fire of 1878. During the rebuilding of the city, the council decided to keep the Victorian architecture intact. That has helped Cape May become one of the National Historic Sites of the United States.

With Thunder Work’s Cape May, players will go back to the 19th century to start the process of building this seaside town. During the game, players will have to face many different difficulties and hardships such as devastating fires, coastal erosion, or competition from surrounding areas. And the final result, players will develop Cape May to become “Queen of seaside resorts”. 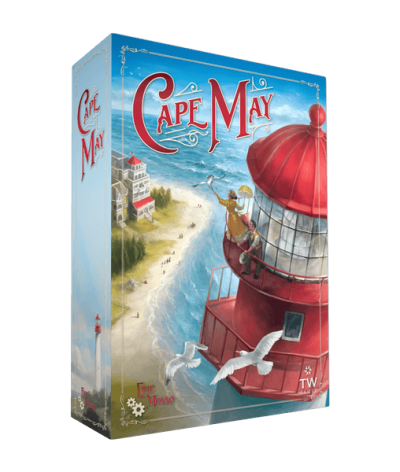 Good feelings about the game:

1. Cape May comes with a new wind of old feelings. I must admit that before buying the game, I imagined the gameplay would be similar to Monopoly. The player must move his Meeple to an area, and build a house in that area. After that, the player must stand next to that area to upgrade that building. Fortunately, that is not the case. In Cape May, the player is completely in control of his actions and strategies. They no longer depend on the luck of the newly rolled dice. Actions in Cape May can be carefully calculated in advance.

2. The game mechanics make for a very interesting and challenging system. The game is not simply point-to-point movement (moving from one point to another). Players also have to be careful when straying onto one-way streets, which are expected to take more moves to step out. With a certain number of actions, the player must not only optimize their finances, but also the moves in the game.

3. Cape May is very accessible. The first is the rule book with many great examples. When reading through, players easily understand and know the meaning of the actions as well as how to play. Cape May also doesn’t rely too much on language. Only event and upgrade cards are in English.

4. Cape May’s flow is very smooth. The player doesn’t spend too much time on his turn settling and finding action. The actions themselves are also simple and easy to understand. Therefore, players will not suffer from AP – analysis paralysis – too much in the game

5. The Production Value of the game as well as the Table Presence (the presence of the game on the table) are at an excellent level. Without too many complicated components, each player will build a residential area on squares, and a commercial area on pentagons. Upgrading to a historic site is also very eye-catching with the addition of white patches on the bottom

6. The level of indirect player interaction is very high – especially at 2 (or 4) players. Cape May is typical of the saying “Land is tight, people are crowded”. You have to fight each other, compete to build golden lands in the real estate village. In addition, individual quest cards will increase the competition on these lands more fiercely. That’s not to mention calculating the majority score at the end of the game. In Cape May, players will experience a tough real estate race. 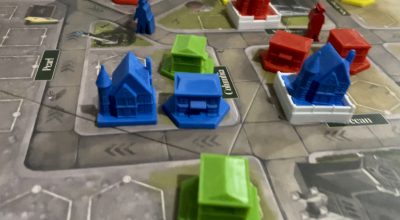 1. One of the Set Collection elements of the game lies in bird watching. The more different types of birds the player looks at, the more points he gets. This is more of a distraction than a goal. If players focus on developing this way, they will definitely lose. Therefore, players should be aware, bird watching is just a side job in Cape May

2. The visual accessibility of the game is very poor; very very poor. 4 areas with 4 different types of soil, but the Earth and Sand areas draw almost the same graphics. The early games really challenged the player to distinguish these two regions. The next thing is the player’s buildings are at level 1. If you haven’t upgraded to level 2, it will be difficult for players to distinguish buildings between players. This can be said to be the biggest minus point of the game

3. Randomness: the event cards are quite random in nature. For some players, they will feel quite uncomfortable with this. But for me, it’s one of the climax of the cycle so I totally enjoyed it. However, the greatest randomness is in the Activity tags. If the necessary card is drawn, the player will have a huge advantage over the rest of the players

With light game rules, easy to understand and simple; Cape May is not too difficult to become one of the quality gate-way games for new players. With its SOLID score, Cape May completely meets that. You can buy Cape May from Amazon at this link 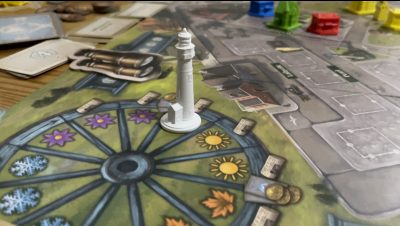