When Arcostream contacted me asking me to review their CDN Speed Cache WordPress plugin and CDN offering they knew I would put it through it’s paces and measure performance up against many others.  First of all if you are a WordPress blogger on any type of hosting account, but especially one where you are charged by the amount of bandwidth usage every month you should consider using a CDN or Content Delivery Network.

What is a CDN

A CDN basically stores and serves all of your static files for you so that the content served doesn’t come from your hosting web servers directly, a good CDN network will serve content from the closest locations possible to the users computer.  This means that when a user visits your site from Japan for instance that the static content served to that user comes from servers in a datacenter in Japan or much closer in geographic location than where your web server maybe hosted.

Why use a CDN

A good CDN has vastly more servers in their infrastructure than any average hosting plan and therefore can handle a much greater load all the while serving content faster than hosting it on your own web servers.  This also means your own web hosting can handle a greater load as less bandwidth and load is put on your actual servers with all of the static content hosted on a CDN.

CDN Speed Cache is by far the easiest CDN service I have ever configured on a WordPress blog.  The only steps involved are simply to visit the WordPress plugin page and download CDN Speed Cache, then go to the CDN Speed Cache settings and pay the $29 initial (and per month) rate for the CDN.

CDN Speed Cache configuration before you pay for it: 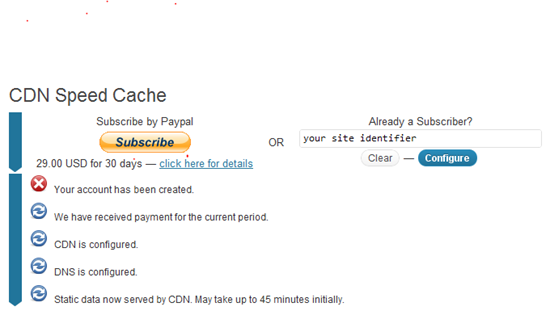 CDN Speed Cache after you pay for it: 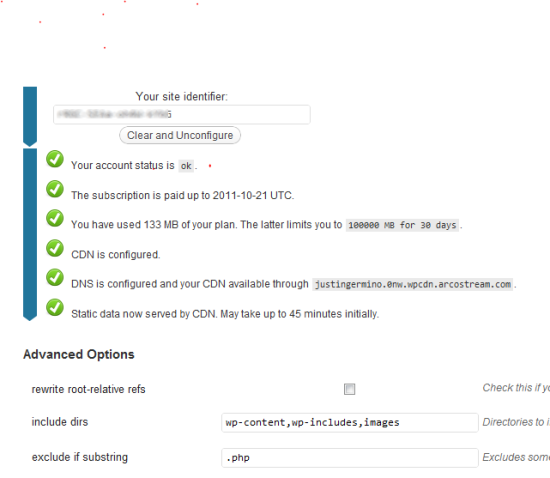 The only thing you actually have to setup is adding any additional directories you want added to the CDN besides the default of wp-content, wp-includes such as any custom directories which host media or image files.  In my case I have a separate /images folder at the root domain that I wanted added to the CDN.

You also can exclude any specific file types like *.php…etc if you don’t want those files served from CDN.  Know that .php is the default, but you could add other file types.

How Fast Does CDN Speed Cache Make Your Site?

I took baselines of my site JustinGermino.com before CDN Speed Cache but with only W3 Total Cache enabled and configured for Page Cache, Object Cache and Browser Cache (No minify, no CDN configured)

Pingdom showed my site having around 17-20 second pageload times total end to end without anything but W3 Total Cache.  I tested 2 times and one full month between tests to show they were consistently around the same mark.

I installed and configured CDN Speed Cache and in about 2 hours it was up and running.

NOTE:  If you use W3 Total Cache you will need to do a Cache Flush and make sure you do not have CDN enabled in W3 Total Cache for CDN Speed Cache to take effect.

The results were amazing and just by turning on the CDN my WordPress log pageload times with Pingdom went from 17-20 seconds to between 3.8 and 5 seconds on average.

Even WhichLoadsFaster showed my site loading at 1.5 seconds pageload time, and showed JustinGermino.com with CDN Speed Cache was 95% faster than ProBlogger.net and their site was no slouch at 2.9 seconds. 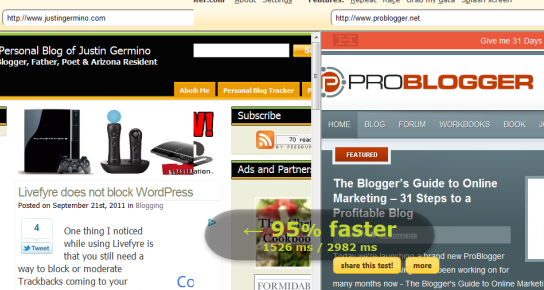 I decided to go one step further and perform some user load testing against my site with LoadImpact which I do fairly regularly and was astonished to find out how well the CDN SpeedCache held up performance under load. 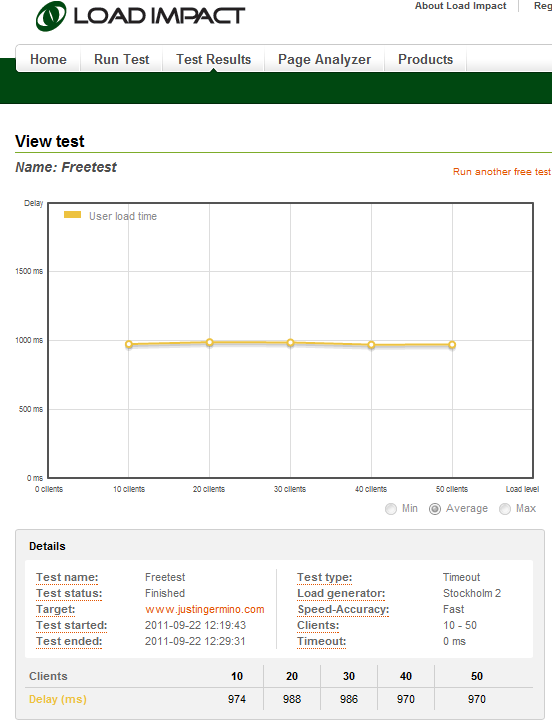 We are talking about load tests from 10 to 50 concurrent user loads and in every single test had the load times in less than 1 second with 0 timeouts, and the load test was from Stockholm with my hosting provider in the U.S.

Not even this site DragonBlogger.com fares so well with Load Impact averaging about 55% higher load times under the same load.

Without a doubt for WordPress beginners who want to improve the load times on their site without having to do any manual configuration other than type a folder or two and click to purchase, CDN Speed Cache by Arcostream is the fastest, easiest solution I have ever seen to setup a CDN with WordPress.

I will also say that the Acrostream CDN service provided from CDN Speed Cache is faster than other CDN networks I have tested and I did tests behind Kroxy and Gomez Instant Test Pro using various locations around the Globe.

If you want to increase your pageload times for your WordPress blog, then CDN Speed Cache is the way to go.

The $29 per month plan gives you 100GB of bandwidth per month, and is not a pay as you go plan but there are no contracts required and you can cancel at any time.  I will honestly say that it isn’t the cheapest CDN on the market, but can say with certainty that is the easiest to setup and the best performing CDN I have ever tested so far.  You get true enterprise level CDN service for a fraction of enterprise CDN cost with this plan.

I did several other site comparisons with my JustinGermino.com blog against Mashable.com among other sites and the CDN SpeedCache showed my pageload times were pretty fast.  That isn’t to say that my site is faster than all other sites, I still am using a shared hosting provider and caching doesn’t stop all SQL queries and PHP code from executing.  Also my sites do host external ads like AdSense, Amazon Banners, Facebook buttons…etc which increase my load times a bit.    So comparing some sites is a little like apples to oranges.  This is why I do most of my benching on my own sites using other combinations of CDN compared to CDN Speed Cache so I have baselines before and after for the same site. 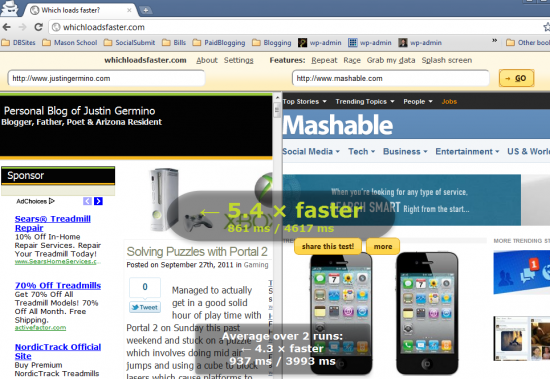