I was contacted by the creators of Graphic.ly and asked to see if their freeware is worthy of being mentioned on DragonBlogger.com.

Graphic.ly is an adobe air applications (like Tweetdeck) that  is a social network for comic book lovers.  It is a medium for comic book fans to browse and read both free comic books and purchase online digital comics to read at their leisure.  For someone who enjoys reading comic books (I don’t buy very many) I thought it was a good idea.  Especially since I have two kids who love comic books and this would be a way for us to gather around the screen and read some comic books together. 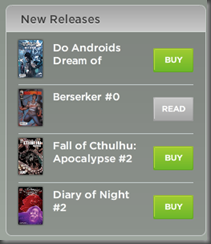 I signed up and let the program connect to my Facebook account so it can build my profile and post to my wall when I decide to make updates or recommendations.  On the right had side of the screen you can see new releases and top comics.  You can see which ones are Free and the first one I saw was Beserker #0 and started downloading it.

One complaint right off the bat is the speed of downloads, it took almost 10 minutes to download 1 free comic book and you can browse internet comics for free at a fraction of the rate of waiting for one to download.  I used to read dozens of NBC Heroes animated comics on their website and even at 44mb per PDF comic book they loaded many times faster than the one I tried to download.

I browsed the comic store and saw 18 free comics online for download right away including some Witchblade issues, Spartacus and Wanted.  The artwork in the comics is virtually as good as any purchased comic in my opinion. 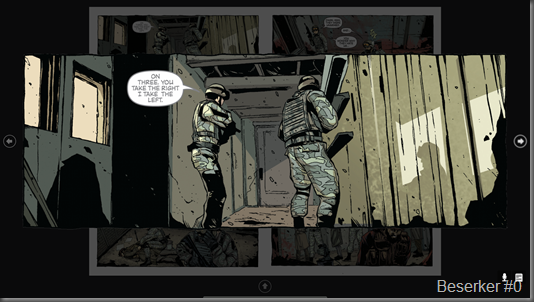 I liked how the authors of the comics were displayed and you could see upgrade the package to get audio commentary and extra notes if you liked the comics enough and were big fans of the creators.

The number of comics in the system is small, but I think Graphic.ly has merit and potential, though the adobe air application is very slow and even clicking on users profiles can take minutes to pull up their information.

Graphic.ly is a good place for people looking for some free comic books or some online comic books to read and see reviews of what other people think.  The comic downloads are far too slow, as well as the community section needs to be faster and easier to browse users, there needs to be comic categories (once there are more comics in the system) and there appears to be no ability to browser of find other users other than seeing which activity is in the home wall or relying on the suggested friends feature of the application.

Content Creator/Owner of https://t.co/kw5uyPB8lq for Tech, Game, Entertainment and live streamer/influencer at https://t.co/sr2qU9ewLV
We are now Live Streaming on the Dragon Blogger Channel, come check us out and say hi and see what is streaming now! - 12 hours ago