I honestly was a little lazy and didn’t feel like re-installing my entire OS when I received an SSD drive, so instead I started investigating ways to gain some benefit of having a 2nd smaller SSD drive in a pre-existing Windows 7 system without having to re-install the OS and all the programs, drivers and such which would take most of a full day. 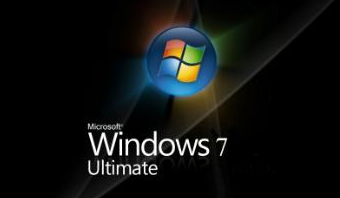 Windows 7 has a feature to automatically recognize a drive installed (USB Flash or Hard Drive) that has higher read/write operations than the current boot disk, when you right click on the drive, you can see a “ReadyBoost Tab”. 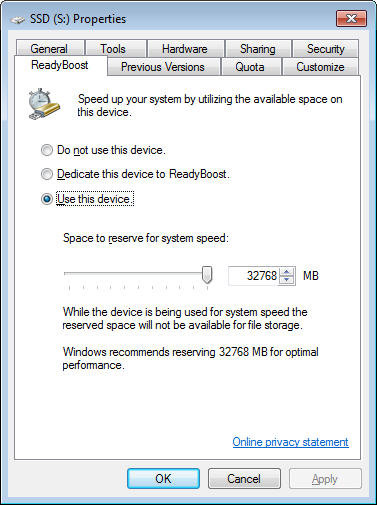 In this tab you can allocate up to 32GB per partition to be dedicated as a Readyboost partition. Once selected it subtracts the free GB from your hard drive free allocation indicating it is used. You can also get around the 32GB by creating more than 1 partition and assigning each partition 32GB if you want. For purposes of my testing I only need one 32GB ReadyBoost partition however.

What is Windows 7 ReadyBoost

ReadyBoost is a way for Windows 7 to use your faster drive (flash or SSD) as a caching system that will hold your most frequently accessed files. It will automatically become available if Windows thinks you will benefit by using ReadyBoost on a drive other than your C: drive, if you are already using an SSD Drive as your boot drive Windows 7 will not likely show you a ReadyBoost option as your drive is likely faster and ReadyBoost will provide little benefit.

With ReadyBoost I wasn’t able to see any noticeable difference in performance for application load times, save times, close times at all specifically because I have 8GB of RAM.  I was able to show that the I/O Operations were caching to the ReadyBoost with Performance Monitor based on this article: http://www.techrepublic.com/blog/window-on-windows/keep-tabs-on-readyboost-with-windows-7s-performance-monitor/2257

With everything I have read on ReadyBoost including a fairly good Anandtech cover of performance benefits ReadyBoost provides clear benefits to systems with under 2GB of RAM and way more benefits to those with 1GB of RAM or less.  It is a clear benefit for RAM limited laptops that need an extra boost of RAM and works with flash drives to improve random read/write operation performance.

In Windows 7 the ReadyBoost algorithm supposedly has also been improved , which should result in better performance. According to a Wiki entry on the subject, one test showed reading of flash memory up to 5-10 times faster in Windows 7 compared to Windows Vista due to higher hit rate.

After spending hours trying to determine if ReadyBoost was providing any benefit to my Windows 7 system I determined that 8GB of RAM is simply too much for any noticeable ReadyBoost performance with an SSD or a Flash Drive.  ReadyBoost will provide benefit if you have limited RAM (1GB or less for most benefit) but if you really want to see performance improvement on your system with Windows load times, application load times, and all read/write operations from your hard drive then you will have to use your SSD drive.  The best benefit of course will be re-installing Windows onto your SSD drive and using it as your primary boot drive.  Smaller benefits would be installing your long load time applications to your SSD drive instead of your primary drive but the load time improvements would only be for those applications installed on your SSD drive.

I was real impressed with the Kingston SSDNow V+200 and intend to find the time to re-install my OS soon and make this 90GB SSD drive my primary Operating System drive at some point in the future.  I am going to have to research ways to do this as cleanly as possible, I am hoping I can simply “mirror” or “clone” your OS to an SSD Disk and switch over which is the boot drive.

I am giving away a Kingston SSDNow V+200 90GB Drive for those who want to enter, just click on the banner below and enter the contest!  1 Lucky reader will win, contest ends on April 30th 2012. 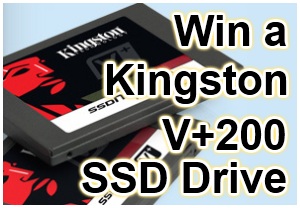