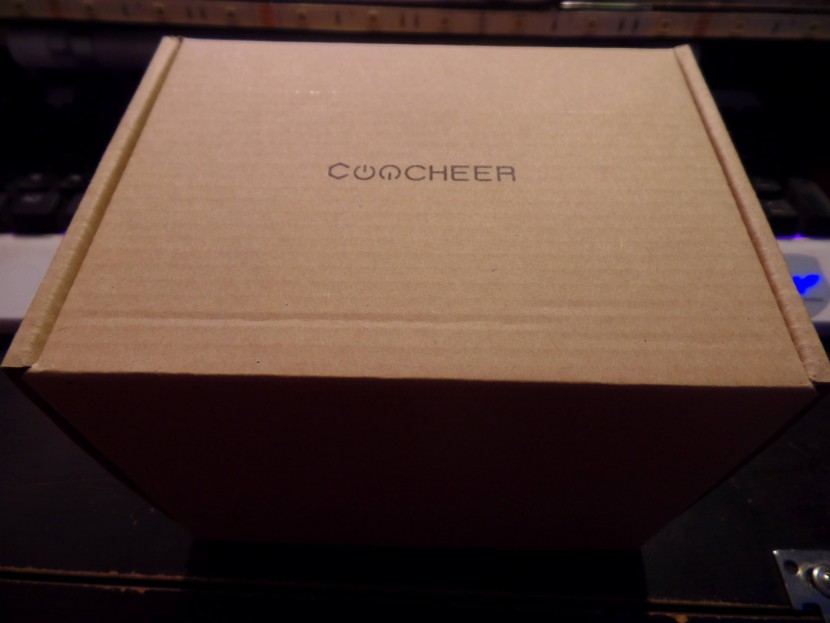 I opened my Coocheer Desktop Power Center and was pleased to see a beautiful product. I noticed the 5 charging ports on top right away, as well as the two additional extra power plugs for everyday use. Each of the USB ports say they are smart which should mean no matter what I plug into it, it should be able to charge it with no problems. So, I reviewed the manual. This is where things got a bit hard to understand.

The manual is at best, confusing. The English translation may have the words in the right order, but the structure leave me wondering what it says. If I understand things correctly, I will have to reset the charger each time I change a device with it, and it might not be wise to mix devices of different types, IE, android and non-android. I hope this is not the case but that is how it looks according to the documentation.

I decided that maybe I read things wrong so I went to the products web site for the company, and according to the site, they do not sell this product or any like it. In fact they sell only 3 items, and the prices listed on the site are very different that those listed on Amazon. So, I decided to go to Amazon, and left there just as confused.

The item I thought I was getting was black, but the one I got is white, but the description of the white one is that it is black, and has more outputs than it has. One description says I can have up to 8amps worth of things charging but in another place on the page it says I can have 5 things at 2.4amps hooked up to the charger. This would be 12 amps and it does not add up.

I also noticed that product descriptions were mixed some saying that the black version of the product I received has 8 120V outputs. I may be wrong but each device should have its own description that is unique to that product. Otherwise, it is confusing and simply misleading.

The product itself is amazing however. I have had no trouble charging any device I have attached to it. I have charged my Dragon Touch M8 tablet, my Kindle Fire 2nd gen, my wife’s Kindle Fire HD, my Vinsic Power Bank, my granddaughter’s tablet, another power bank, e-cig batteries, and my IPod Touch. All have charged flawlessly and with reasonable speed.

I installed an app on my Tablet to check the voltage and amperage being sent to the battery while charging and there was very little difference in charging power between the Coocheer charger, and anything else I charged my tablet with. There was a slightly higher power rating from the Coocheer but I honestly am not sure how much difference in timing that might make. 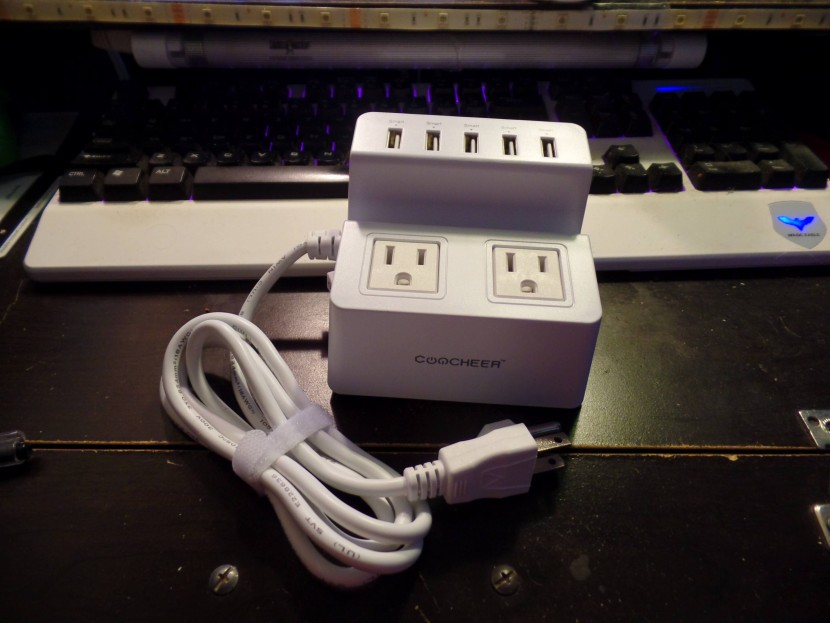 One thing I like are the number of USB charging connections. There are 5. While this sounds awesome, there is one small problem and I honestly do not know if it is an electrical limitation or just a choice the makers made. You are limited to a total of 8 amps out. Most tablets use 2.1 amps or so and phones and other small devices a little over 1 amp. So ideally you can have 2 tablets, and 3 phones/ lesser amp devices connected at the same time. It is also nice that it does not matter which port you plug into as any of them will detect the devices needs and respond accordingly.

It is also nice that there are two additional 120 volt connections for other things you might need. I have one tablet/ laptop that will not charge using anything other than its original 120 volt wall charger. So it is nice that I can connect it to the base of this unit as well. 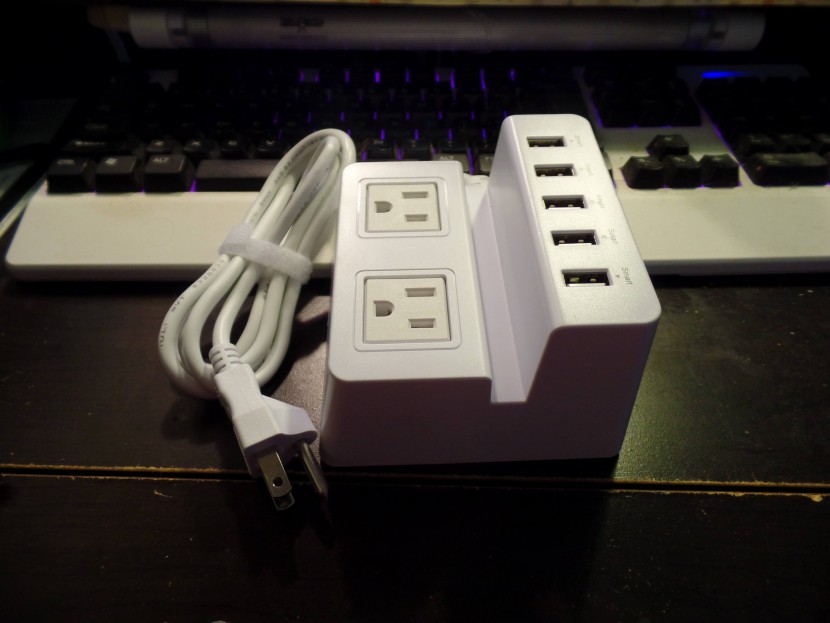 When reading the descriptions of things online, I have the feeling that this is supposed to be a surge protector as well, but I do not see a reset button on it like many surge protectors have. There is an on/off switch but I am not sure if that acts as the reset switch or not. So far, the company has not contacted us with clarification and the information online is vague at best. If any of my readers have an inside scoop on this feel free to share with me.

One last thing to mention is the shallow slot separating the USB ports from the wall plug areas. I do not know what its intended function is. I have considered that it could be a place to hold your phone while charging, but have somewhat discarded that thought. Yes, all the phones I have tried in it, fit fine, but the shape causes the screens to face downwards so it would not be a functional holder to allow usage while charging. Still they fit. 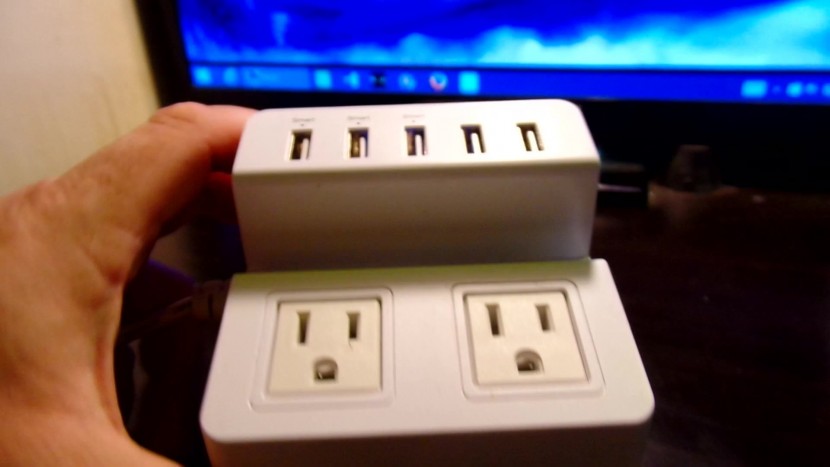 I have also thought that it might serve to hold the cables out of the way while they are in use to help de-clutter the desk top a bit. While some fit, they do not stay in place very well. So the function of this space remains a mystery. Maybe it is just design. It does look nice. 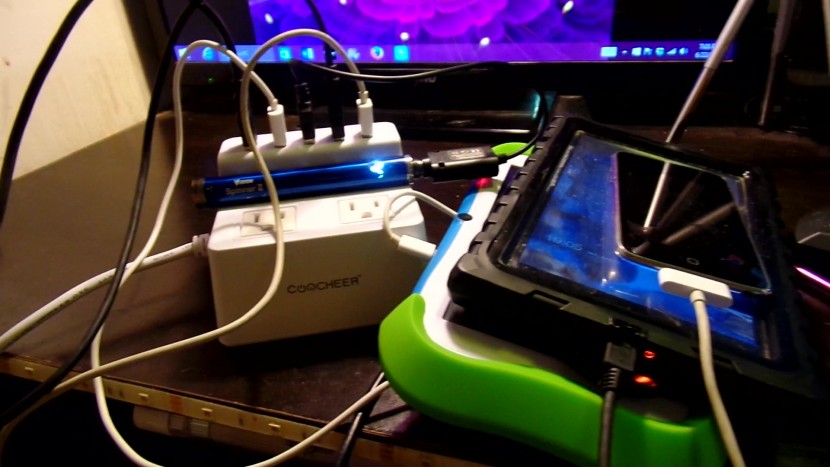 My last comment on the device is that it does look nice, and has a small footprint even though it has so many places to attach stuff to. Every one of my family members wants it, and I have a large family. So, it is a product that looks good and does a great job charging your devices. I would recommend it to anyone who needs to charge a large number of devices at the same time.