Walnut Creek, Calif. (June 29, 2021) – Maximum Games today released the rapid-fire schmup Curved Space across PlayStation 4, PlayStation 5, Xbox One, Xbox Series X|S and PC, with the Nintendo Switch version launching July 13. Curved Space is available to purchase now for those that think they can take on waves of high-powered enemies from across the galaxy.

Curved Space is an intense arcade-style twin-stick shooter that takes the classic formula and plunges it into the weirdest reaches of space. Battle cosmic space-invading spiders across curved landscapes where bullets hug the terrain while the horizon drops sharply out of sight.

Inspired by arcade classics, players will have to hunt for weapon power-ups and upgrades while dodging enemy fire, blasting interdimensional bugs, and wrangling some enormous boss monsters. Simple to learn as you fight your way through the branching story-driven campaign, but tough to master as you chase the glory of the leaderboards. 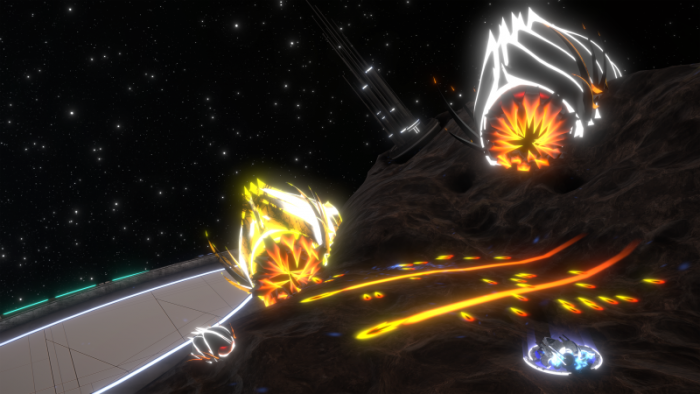 Maximum Games ranks as a top 20 global video game publisher of interactive digital entertainment spanning all genres and supporting multi-platforms. The company’s mission is to provide a proven and strong hands-on approach to publishing, marketing, and distribution. Established in 2009, the company is led by female entrepreneur Christina Seelye, a seasoned executive of digital consumer products and channel marketing. Under Seelye’s leadership, the company has been recognized with numerous awards such as “Fastest Growing Tech Company” by American Business Awards and has made the Inc. 5000 list of Fastest Growing Private Companies for five consecutive years. Maximum Games has offices in both the US and UK and continues to expand its scope of global publishing and distribution via direct reach and strategic partnerships. For more information on Maximum Games, visit the company’s website at http://www.maximumgames.com.

About Only By Midnight

Only by Midnight is owned by a husband and wife duo. Andrew Czarnietzki is the lead developer, functioning as Designer, Programmer, and Artist and has 15 years of experience in the games industry. Jen Laface is part communications and part storyteller. She has over 10 years’ experience as a science fiction and fantasy writer and editor, and served as Publisher’s Assistant of Canada’s longest-running science fiction and fantasy short fiction magazine, On Spec.