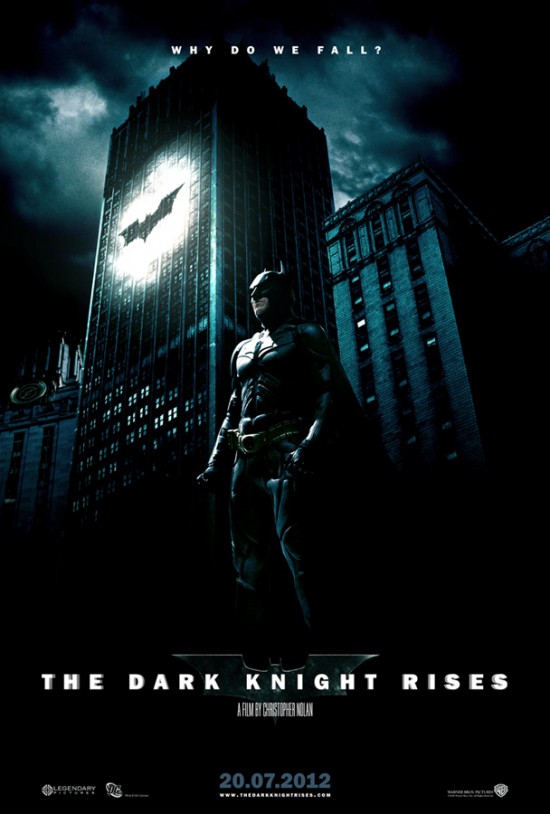 Heh heh heh! This review is going to be a challenge! Review the film without giving any spoilers is tough enough, but the fact that I really liked the movie despite the fact that it had some pretty big flaws…that is a lot of work! I mean, with the cameos of Arnold Schwarzenegger, the brief glimpse of The Joker alive at the end, and the surprise appearance of Bat Mite, what else can you ask for?

Just kidding, none of those things are in the movie. You would have been looking, though, wouldn’t you? Heh heh!

In the aftermath of The Dark Knight (the previous film, to those not paying attention), Batman (Christian Bale) has been in a form of retirement for 8 years. Gotham has been in good hands due to laws passed after the events of the same previous movie and the efforts of Commissioner Gordon (Gary Oldman, but retirement has not been very good for Bruce Wayne. In walks Bane (Tom Hardy), a mercenary who, for his own reasons, wants to break Batman totally and burn Gotham city to ashes. Mix in some bad (as in crooked) business dealings and a fan-favorite female thief (Ann Hathaway) and we get a pot of chaos. Michael Caine comes back as Alfred, Morgan Freeman reprises his role as Lucius Fox, and joining the cast is Joseph Gordon-Levitt as a Gotham police officer named Blake and Marion Cotillard as an interesting love interest for Bruce.

For anyone who has read my previous reviews, you know I’m a comic book nerd from way back. I don’t know everything, but for iconic characters like The Bat (his personal friends can call him that, you know) I’ve read a LOT and seen all the movies and most of the cartoons. I also can take a movie on its own merits. I might compare a film to earlier movies, but I don’t judge it by them. I likes what I likes. First thing I’ll say to the big Bat fans, this isn’t the same film as The Dark Knight was. The feel is different, the subtleties are different, and I came out of the theater not at all comparing the two. I’m not saying it is a bad movie, just different, kind of like how Alien and Aliens are different films.

I might get some flak from fans, but this movie does have some really big problems, one of which being the screen time. Lord of the Rings movies seemed far shorter than they were when I saw them in theaters. Likewise with Pirates of the Caribbean: At World’s End. By the time this movie was heading towards the finally I definitely felt the long running time. There are several scenes that really do not have a specific purpose and could have been shortened or excised.

Another thing I found concerning is some of the things that occur during the film. I don’t want to put spoilers up, but some of the things that have happened or are happening take a lot more suspension of belief than the Dark Knight did. I know it is a fiction based on a super hero (though I don’t really consider any of Nolan’s Bat films as super hero, more like straight up action), but so much that happened in Dark Knight was somewhat believable. Here I really had to work hard to overlook some events. Sadly, one of the things I’m referring to was a major part of the climax.

I think the filmmakers just had way too much going on and that dragged down the film. You have Batman becoming Batman again, Batman and Catwoman, Batman and Bane, Jim Gordon, another cop that gets a lot of screen time, just too many elements to give them all proper time. Spider Man 3 had that same weakness, just too many subplots and characters for them to focus on.

I hope I’m not spoiling here, but I have to mention this as it took me out of the ending; Batman seemed to acquire Jason Vorhees’ power to teleport to just the place he needs to be most for his mission (of course, for Jason, it was to the location of his next victim). During the end sequence Batman just arrives several places in a short amount of time. The way the scenes are edited together, several characters must have just stood around for many minutes as Batman appeared elsewhere, took care of business, then motorvated to the location of the next save. The bad guys must have just stopped to play cards or something, because otherwise a major character would be dead.

Lastly, I just didn’t feel like I was watching a Batman movie. I applaud the filmmakers for trying something so different, and it is a fun movie to watch, but you could really change the names and outfits of the principle characters and make it not a Batman movie. It is more like a high-octane Rocky movie, with the plot being Batman overcoming the obstacles in his way, not solving a mystery and catching the bad guy. I felt the same way about the Batman and Robin film (you know, with Arnold) except that B&R is not a good film at any level.

Don’t think I hate the movie, however. Even if it does not feel like a Batman movie, it is a very good action film. The main action sequences are well done, the fight scenes are well choreographed, and the chases are gripping. In fact, they fixed the thing I disliked most about The Dark Knight; how the fight scenes were edited in such a chaotic fashion. In Rises, we had some good old fashioned fighting, no quick editing until you can’t tell if they are really fighting or just filming individual strikes and editing them together. Especially during Batman and Bane’s first altercation, you see them fighting, trying to outmaneuver each other. It is a very physical scene, and underscored by the fact that the filmmakers dropped the music. Much of that first fight has no music, no background noise, just the sounds of the fight, and that heightened the tension.
Speaking on tension, they manage to keep tension high during many of the key points of the film. They tried not to give anything away and made it harder for me to predict what was coming. The acting is as superb as the previous films, and when several characters are put in positions that are mentally or emotionally charged, the superior acting shines. The overall action is mostly believable; There are only a couple times in the whole film that I saw something that I couldn’t accept from a perspective of human ability. Even Batman stays ‘human’, not performing moves that defy everything a man in a heavy suit could do. During the hand to hand fights, it looked like fighting, not ‘wire-fu’ stunt work. And both of the two main women in the film are strong in their own ways. So refresing to see.

There was one moment in the film that did make me gasp out loud, and I wasn’t the only one. Any movie that can do that without suddenly adding something new and without sudden graphic blood and guts gets extra points for me.

Finally, The Dark Knight Rises did something I did not expect but really appreciate. One of my great bugaboos in action fiction is the evil plot that is so complicated, any one thing could have derailed it (a truck pulling out onto a street, for instance) but of course the plan works perfectly. I’ve seen that so many times in movies, tv, and even comic books. In Dark Knight Rises, any number of things could have gone wrong for Bane but the plot still would have arrived at nearly the same point for the climax. About the only thing Bane absolutely needed for his plot to work is the first thing in the opening scene, most of what follows for the rest of the movie could go very differently and yet have Gotham right where Bane wanted it. At one point, you even get a moment where Bane adjust his machinations to compensate for a new development. Whether it was just that well thought out or a happy accident of the filmmakers, I appreciated it. I’ve always hated watching a long scene, then said, “But what if that guy had a cell phone and called the cops? What if that bus were late? What if that guy suddenly had to go find a toilet? Too complicated a plot gives Murphy too many opportunities to mess it up, but somehow Dark Knight Rises sidesteps this.

So, in all, it didn’t feel like a Batman film but was still highly enjoyable, even if a bit long. Instead of playing it safe and retreading old ground like so many sequels do, Director Nolan tried something a little different, taking a bit of a risk, and ending up with some really good cinema. Not a perfect movie, but still better than many that DC has put out in the last 10 years or so. I may receive some flak for this, but I will give the film 3 out of 5 stars.