Harness the evil forces in The Darkness 2

Sometimes the Darkness chooses you as an instrument of destruction, but this didn’t stop Jackie from harnessing this power and turning it into a devastating weapon. In The Darkness 2, the story picks up from where it left and reveals a character struggling to preserve whatever humanity is left inside him. At the same time, he feels no pity or remorse in dismembering enemies or gunning them down, which makes the campaign even more exciting. The battle with the evil forces that grow stronger inside him is just as intense, so the sequel should have plenty of depth to keep us wired for many hours.

Be afraid, be very afraid 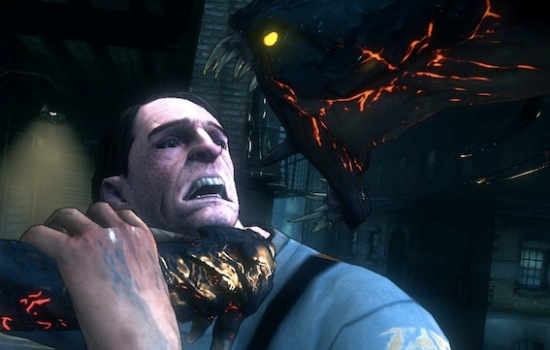 Unfortunately the narrative remains unconvincing and players will frequently get the feeling that the game was rushed and that the release date was pushed. Nevertheless, what the game lacks in storyline it compensates in gameplay and this is just as engrossing as it was in the original. Killing enemies is what you will be doing most of the time, which makes this activity critical and it pays off to come up with new methods of getting the job done. Granted the weapons can speed up the executions, they are not as visually rewarding and they don’t award as much experience either.

It definitely helps having an extra set of hands, but when these come in the form of evil serpents capable or ripping limbs off, the murderous spree is truly a pleasure. All this gore demands for ranking the game as 17+, but contrary to popular belief the cartoonish graphics make each scene less gruesome. For each deadly blow that you strike using your powers and for every slaughter that is performed in an original way, you are awarded more experience. It can be used to unlock new abilities and enhance your powers, which is vital to survive in the latter stages of the campaign.

Violence has never been so exciting

Good things come to those who wait and even the story picks up as the end draws near, immersing players into the narrative. Enemies are powered by a decent AI but they are no match for your super-powers, so as you progress with the campaign you will fee increasingly powerful. On the downside, foes look very much alike and you won’t know if you killed a hundred of them, or the same one hundreds times. The Darkness 2 is a worthy successor and despite its flaws, it is worth playing in both singleplayer and multiplayer.

Giving it four stars out of five is a bit generous, but those who like this kind of gratuitous virtual violence will surely agree with this ranking. The trailer should shatter any lingering doubts: