So many readers ask what I recommend as holiday gifts in various categories based on both my experience with products, reviewing products as well as what I buy personally and use myself.   Obviously so many people ask in so many categories so I am going to make a top recommended in a variety of categories to help give people some ideas, there is no particular order to this holiday recommended gifts and I will try to mix it up so it isn’t all technology and gadgets but will help be a framework for getting something in the same category.

Obviously you have those who love Nintendo and the properties like Zelda, Mario and Metroid which are very platform specific here, if you have a Nintendo lover in the household and especially if you have two or more people in your household who like to co-op couch play the Nintendo Wii U with Super Smash Bros Wii U is one of the best games out right now that overall provides hours of entertainment.  If you are a Sony fanboy then the PlayStation 4 is certainly not a disappointment and though there were many who didn’t like Destiny it is still one of my favorite FPS games, though Call of Duty: Advanced Warfare might be your thing.  For Xbox One the exclusive Sunset Overdrive is well reviewed and very popular as well.  For LOTR fans Middle Earth: Shadow of Mordor for any platform (except Nintendo) is fantastic and continues to have DLC content.  If your family already owns a PS4 but doesn’t have a PlayStation Plus membership then this is highly recommended, the 2-3 free games you get per month alone more than are worth the cost, you can get a full year membership for like $49.99 on Amazon too. 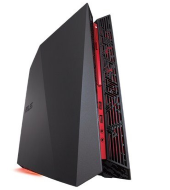 For PC Gamers who don’t have a gaming PC but want one, there is a few options in 3 different price classes: Asus released the new G20 Gaming Desktop which is amazing for the price, and is a great deal if you want a mid range gaming PC that can do full 1080p, has great aesthetics and will keep your budget under a $1000 including if you have to buy a monitor, keyboard, mouse and any other accessories.  It is just $724.99 on Amazon and it gives you a fantastic amount of gaming for that price.  This includes the Intel Core-i3 3.5 GHz processor, NVIDIA GeForce GTX 745, 8GB of RAM and 1 TB hard drive.  It also has 4 USB 3.0 ports and weighs 19 pounds.  Some say the new Asus G20 looks like something that came out of Alienware and certainly it looks like alien technology.   Pair this with the Dell 2414Hx 24″ Monitor which is the #1 selling 24″ monitor with 5ms response times and you get very decent 1080p gaming.

However, let’s say your budget is even more modest and you have five hundred dollars or so, like enough to buy a new console but would rather get a gaming PC instead with the money, then the CyberPower GUA950 which costs $539 on Amazon right now would be an excellent deal.  You are getting an AMD FX-6300 Processor 3.5 GHz, with 8GB Ram, 1TB HDD and the AMD R7 250 2GB graphics processor which isn’t fantastic but should still do well for the budget gamer.

Let’s say you have a Smartphone already, if you don’t then obviously the iPhone 6 or iPhone 6 Plus if you are a Apple fan is going to be the latest and greatest, with the iPad Air 2 being an incredible powerful laptop.  If you are an Android fan then the Google Nexus 6 phone is the greatest Android has to offer and features an incredible fast charging feature where 15 minutes of charging gives you 6 hours of battery!  The Samsung Galaxy S5 is certainly a great phone as well, but also I hear great things about the LG G3 though I haven’t tested one myself, our team member James Braga has an LG G3 and can tell you how great it is.  As far as accessories you know I love the Kingston MobileLite Wireless G2 which allows you to take all your media with you without wasting your mobile storage space, you simply pop in an SD Card or USB stick full of movies, TV Shows and you can stream to up to 5 mobile devices at the same time.  I own one and love it and use it all the time for long road trips with the family.

An external Power Bank is one of the most important devices if you travel frequently and if you have multiple mobile devices like a smartphone and a tablet you need one that can charge both and keep them charged for hours.  I have reviewed so many external power banks over the years and there are great models by Anker, RAVPower, Etekcity, New Trent and more, but I have to give a shout out for the EC Technology 22,400mAh power bank because of it’s very high capacity and 3 USB ports.  This device will fully charge most tablets 2x and most smartphones a dozen or more times, you literally can work all day from a conference room for 8+ hours using just your tablet plugged into this as the power source and you will barely notice a dent in your battery drain.  It is 56% off right now for $39.99 which makes it an excellent item and this is the one I use and travel with most for my big trips.

Of course smartwatches and wearable technology is becoming the it THING for 2015, and the Samsung Galaxy Gear is mostly highly regarded. For those wanting something just simplistic that simply is used to help track your health and activity goals then the Fitbit certainly will do the trick but is a bit pricey in my opinion.  As far as Bluetooth headphones go the best ones I have personally used are the Creative SoundBlaster EVO ZxR noise cancelling Bluetooth headphones which not only sound great but help filter out background noise.  Listening to an audio book for five or six hours at a time is a pleasure with these ultra comfortable headphones and I have never enjoyed a pair of headphones as much as the EVO ZxR.

Okay I had been trying for years to get Blue to send us some Yeti products to review and was never successful, so I broke down and purchased a Blue Yeti USB mic and set from Amazon a few weeks ago and the audio clarity and control is beyond anything I have ever heard.  I cannot recommend enough how great the Blue Yeti USB mic is but I will also say the Pop Filter is important as well, so this set from Amazon is a great deal and will provide you with the highest quality of audio for your podcasts, gamecast recordings and more.   If you PC game and live stream to twitch this is the ultimate voice clarity that you won’t get from any gaming headset microphone ,the only con is that it is a very large mic and you need appropriate desk space. 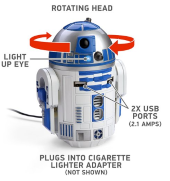 Obviously I will say that I love both Nerdblock and Lootcrate which have their pros and their cons, they are fun subscription gifts that can be hit or miss depending on what you are a fan of but it is always fun to get one every few months or so.  I particularly love getting Geek culture T-Shirts which are my favorite part of any crate subscription.  For Star Wars fans you can even get an R2-D2 USB Car Charger that fits in the cup holder for your car and whistles and beeps while keeping your mobile devices charging while driving. Or you could play Mind Games with the Mindflex duel game and challenge a buddy to see who has better mental acuity. Of course being that I am an old school Dungeons and Dragons player since the early 80’s I will say I was very excited about the new 5th Edition Dungeons and Dragons and the Players Handbook and Dungeon Masters Guides are now available.  Nothing beats old school Pen and Paper board gaming for fun, unlimited creativity and the ability to literally act and role play out your favorite characters with your friends and family.