Welcome back to yet another article discussing the future of Gaming, whether it is on PC or on Consoles. Before we actually continue on with the topic, I’d like to say that in this post, as always, the facts are stated as facts, while the opinions and assumptions are stated as they should.

Now, let us understand what we are actually discussing here today. You’ll know what I mean if you use social networking websites, when I say that people are always arguing as to which platform of gaming is going to die first, or live longer than the other. There are a bunch of posts on different websites, with titles similar to:

First, which is what?

A console literally means “a small electronic device for playing computerized video games.” That perfectly summarizes what I would call the introduction to consoles. A personal computer cannot be defined in such a way, because originally it wasn’t designed to be a gaming platform, rather a personal machine that could calculate when instructed.

Later on, as games were developed, and the power increased on both sides, game developers started producing games for everything that could run them, think about it, consoles, PCs, cell phones and even TVs got games. However that has nothing to do with the topic at hand. Now, we know the definitions and the basic difference of the Consoles and the PC, we can begin laying out the details and assumption about each and every one of them.

Considering that a console is basically designed for gaming, and sure, maybe the current companies who’re manufacturing these consoles might eventually die out, the ‘consoles’ would still be getting manufactured, right?

Its hard to say, since as time passes, everything is getting compact and united. Similar to the fact that we no longer have to use an e-reader for an e-book, a telephone for calls, a PC for internet and a camera for photos, we can just use our Smart phone.

If we were to believe that logic, then eventually we’re going to get ONE machine for our tasks and games. But isn’t that what the PC is for? If we’re going to want to have a single electronic machine for several purposes, then having a PC is the best choice, right? Yes, definitely.

However, a machine for ONLY gaming would cost significantly less, and it’d be especially useful for someone who doesn’t need all the extra perks that are being provided to him when he purchases a costly PC. Is this the reason because of which the consoles will out live the PC?

You see, the developers don’t keep the PC as their major focus when optimizing the games and actually setting the bar for the graphics or gameplay. There are a lot of games that not only have been poorly optimized for the PC, but even their gamplay has been designed in such a way that its more fun to play using a Controller rather than a keyboard-mouse configuration. 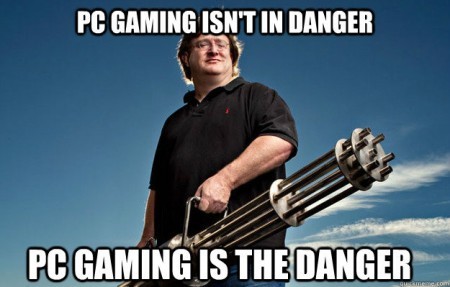 But before we proceed any further…

Dude! Consoles die all the time! They just get brought up again with a different name!

I can see where this is going, and to some extend, people who believe in the above statement are correct. Consoles do ‘die’, but then a new generation of them is released. Take a look at the Xbox 360 and the PS3, both of them served about 7-8 years, then the were succeeded by the Xbox ONE and the PS4 repeatedly. The PC on the other hand never dies and is just being upgraded.

There are 2 flaws in that statement,

1)      The specific console ‘dies’, not the whole concept of Consoles, the latter is the one under discussion

2)      The PC also ‘dies’ in the same sense repeatedly, you can’t keep using the same processor for high end gaming after 5+ years. Eventually you’re going to have to upgrade every single part. However, that specific part died, not the whole concept of PC. The latter being under discussion.

Well, there you have it. The bare facts have been laid out. So, the final verdict?