We just partnered up with ECHZOVE to bring a new giveaway to the fans, this time the giveaway is for the ECHZOVE / DOBE Pro Controller dock which is cable of being used to charge 2 PlayStation 5 controllers, but is also compatible with the Nintendo Switch Pro Controller, Xbox ELITE 2 controller and Google Controller.  This docking station has dual Type-C plug heads which are removable and stick into your controller so that you can easily drop them into the charging station fast and simple. 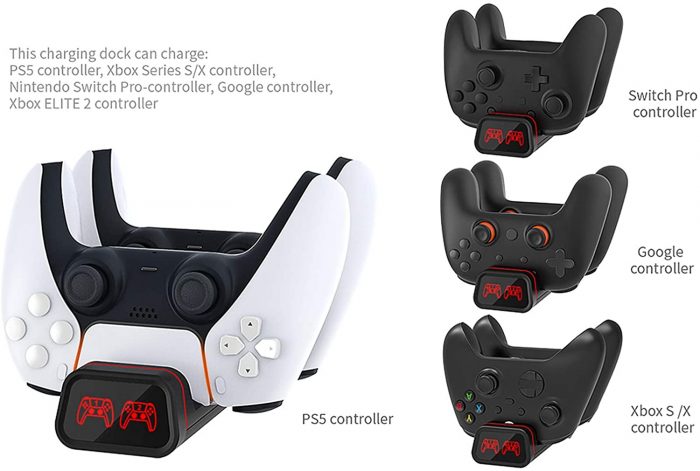 There is an LED display screen and a light bar on the docking station to indicate when your controllers are charging and when they are fully charged, red indicates the controller is actively charging and green indicates the controller is fully charged.  The station is very slim and narrow and fits in any entertainment center area.  It has surge protection and will shut down if it gets to hot so you don’t have to worry about overheating risk.

It gets powered by a USB Type-A plug, which you can power from your console but it is recommended you do an AC wall outlet so you don’t have to tie up a USB port in your console.  Also the PlayStation 5 for example won’t power USB devices while it is off, only in sleep mode.

I actually received one of these to test and review and it worked fine on my PlayStation 5 controllers, but I didn’t want the plug heads to stay in my PS5 controllers and by default they come out and stay plugged in every time you remove it.  This was the only thing I didn’t prefer but it doesn’t mean the product is bad as it is designed to make it as simple as possible to drop your controllers into the charger and by having the detached plug head stay in the controller it is faster to drop it into the charger instead of having to line up the USB Type-C port which causes a slight delay in inserting it.

Giveaway Rules:  This prize will only be shipped to USA address and no substitutions, if you do not have a USA address and want to win this prize, you will need to have a subscription service like MYUS which provides you with a US address and proxies the prize delivery for you.

ECHZOVE also makes a ton of other console accessory items for the Nintendo Switch, PlayStation and Xbox Consoles so you can check out what other items they have available too!

Content Creator/Owner of https://t.co/iWP6afuOc9 for Tech, Game, Entertainment and streamer at https://t.co/594fXMdMIA
RT @DiceDungeonUK: 🚨GIVEAWAY🚨 To celebrate The Cosmic Causeway, we are giving away a Nebular Set that matches each of the heroes! To Ente… - 5 hours ago